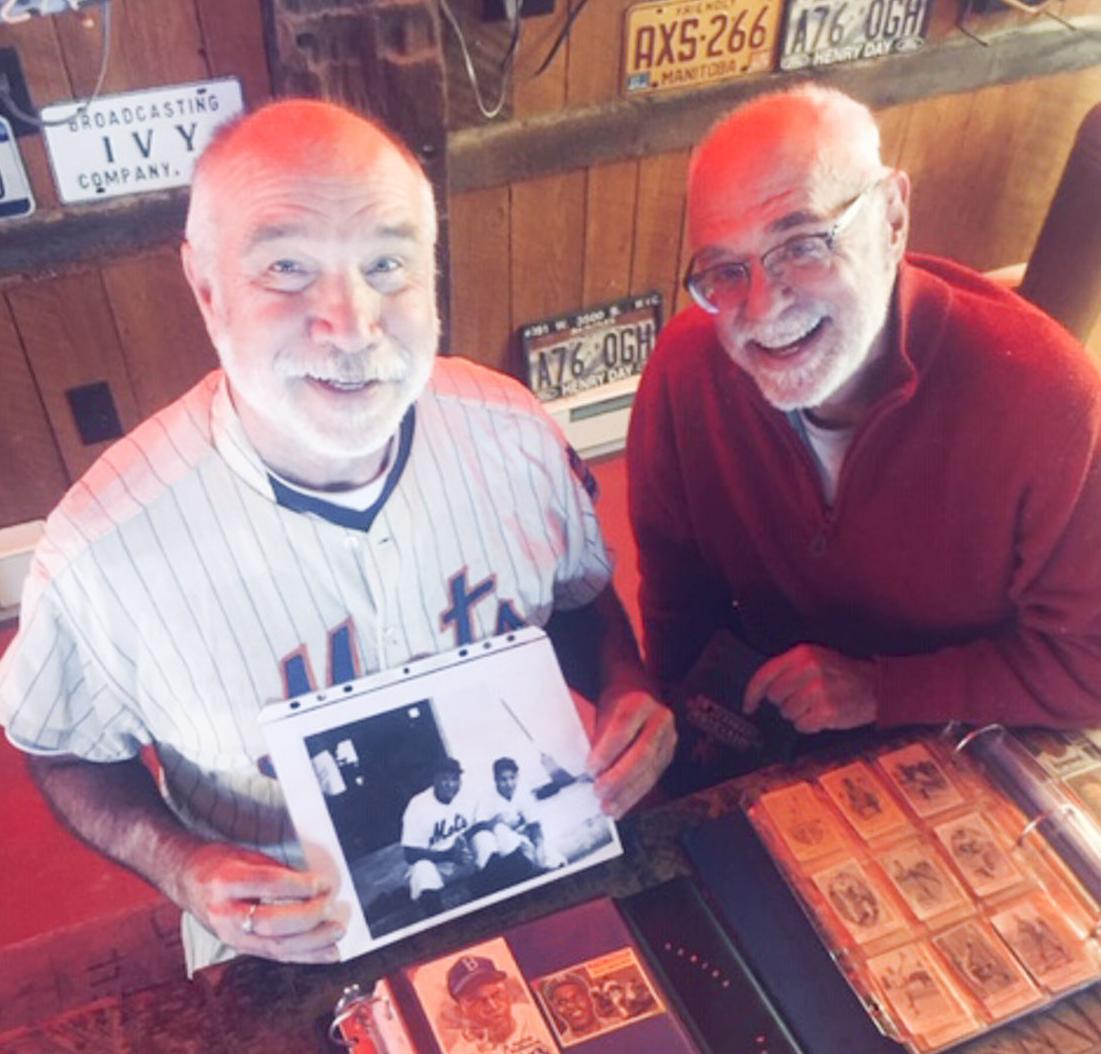 David Moriah and Buck Briggs, with the items over which they’ve built a lasting bond. 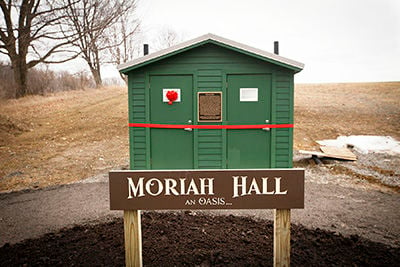 It is safe to say that as a rule, if someone has a building named after them at Cornell, you won’t be getting any Facebook messages from them. That is not always the case, as evidenced by the FB message I received last week from David Moriah, for whom Moriah Hall is named.

David wrote, “I am having lunch with a friend, and I’d like to invite you to join us. Do you know Buck Briggs?”

I asked David, “Do you mean the same Buck Briggs that graduated from Union-Endicott High School in 1972, got his undergrad degree at Cornell, his Master’s at George Washington, and his law degree at Georgetown, then went on to work for the NFL for 40 years in various capacities (including as counsel for the Players’ Union and the Vice President for Arbitration and Litigation), serves as an adjunct law professor at Cornell and at Penn, served as the radio voice of Cornell Football for many years, lives in Ithaca when he’s not working in Manhattan and is an ambitious and refined collector of sports and other memorabilia? I know that Buck Briggs.” David confirmed that I had the right guy.

I scratched my head. I have known David since 1981, as he was instrumental in the launching of both the Cornell Summer Sports School and the Cornell Outdoor Education Program. I knew that he writes for Major League Baseball’s Hall of Fame and World Series magazines (and several other esteemed publications), and that his own collection of sports memorabilia is legendary. He has a cherished photo of himself as a youngster, sitting with Casey Stengel, both wearing Mets uniforms. Casey was the manager and David was the batboy (Spring Training, 1963). David offered, “I have said that if my house caught fire, I would save that picture before I’d save my wife. She doesn’t think that is funny.”

Moriah has boxes of binders full of baseball cards and photos, autographed by the likes of Mickey Mantle, Jackie Robinson, Willie Mays and Stan Musial. He has baseballs signed by legends both living and dead, photos autographed by several U.S. Presidents, and a prized autographed photo of George W. Bush and Babe Ruth.

How, I wondered, did David and Buck know one another?

The three of us gathered around a fraction of David’s collection at Buck’s house, and they teamed up to tell the story. Buck offered, “In 1974, I was looking to meet people to complete some of my (baseball card) sets, and I saw an ad in the Good Times Gazette. I went to David’s cabin in Danby, and there was a Home Plate on the walkway in front of the steps.” David added, “It came from Shea Stadium in 1969.” That was, of course, the year of the Miracle Mets.

David flipped through one of the binders he brought up from his home in New Jersey, and he told me, “We are kindred spirits, members of a bizarre and exclusive fraternity of sports memorabilia collectors.” Buck added, “While we have been friends for 45 years, we don’t see one another often. Our friendship is like that .38 Special song, ‘Hold on Loosely, Don’t Let Go.’”

David added, “For us, baseball cards are like a Time Machine,” and Buck concurred, saying, “One day, when I was a young boy my dad came home with a pack of baseball cards, and I learned to read from looking at baseball cards.”

I sat back in awe as the two baseball devotees traded quips and anecdotes. They are like Google before Google, and they finish one another’s sentences, even when discussing the most obscure details. Moriah recalled meeting the ex-wife of one Danny Napolean, a (mostly) long-forgotten Major Leaguer who had a very brief and nondescript career. He mused, “Did you know that Napolean’s triple won a game for the Mets in…” Briggs jumped in… “Of course I know that. That was a 15-inning game against the Giants in 1965.” Briggs pointed to the photo of Bush and Ruth and asked, “What year was that?” Moriah replied. “1947.” Briggs said, “Ah yes, when Smokey Joe Wood was the coach.” They both laughed, and again, I scratched my head…

Both men are aware that their collections are rare (Briggs has every Topps baseball card from 1951 to the present), and both sidestep any conversation regarding the monetary value. David shared, “Collecting takes me to a place that transcends monetary value.” Buck agreed, saying, “I collect cards because I love where they take me. People have asked me if I wish I had worked in pro baseball instead of football, and I tell them, ‘No, this way I am able to preserve my rose-colored vision of baseball as an oasis… I see it as I want it to be.’”