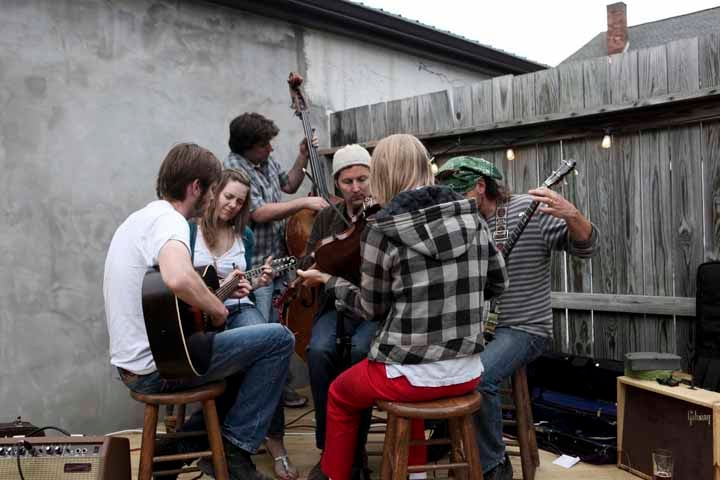 The Hogwashers at the Westy. In a circle with their eyes closed. Yup, that’s old time all right. 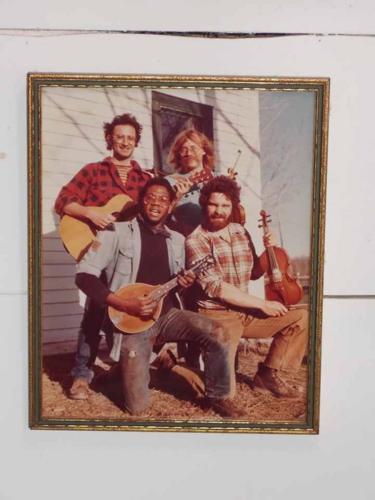 The Correctone String Band. Photo on the wall in John Specker’s house in Vermont. 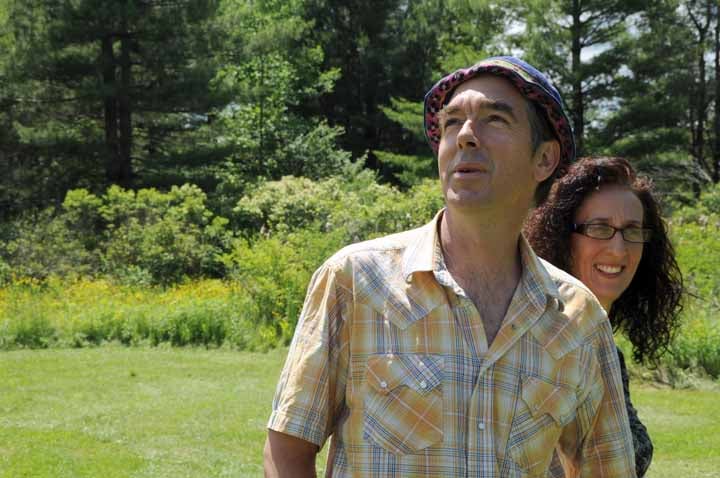 Richie Stearns and Judy Hyman of the Horse Flies.

The Hogwashers at the Westy. In a circle with their eyes closed. Yup, that’s old time all right.

The Correctone String Band. Photo on the wall in John Specker’s house in Vermont.

Richie Stearns and Judy Hyman of the Horse Flies.

“Today there are five or six places in town that regularly feature old-time,” said banjo player Mac Benford. “You don’t find that anywhere else in the country.”

Benford was a member of the Highwoods String Band. In the early 1970s they moved to the Ithaca area from the Bay Area and were in large measure responsible for making Tiny Town into a hot bed of old-time music.

What is old-time music? It is the sound that comes out of a fiddle, a banjo, and a guitar when three people holding these instruments sit down facing one another and start to play them. That is, if they sat down on a porch somewhere in the Appalachians and had descended from folks who played Scottish and Irish dance tunes and the blues.

In the 1940s Bill Monroe and his virtuoso gang of well-dressed ruffians brought a jazz attitude to old-time, playing with acrobatic finesse and taking (of all things) solos. They called that bluegrass. While old-time was traditionally accompanied country dances or was played for the musicians’s own enjoyment, bluegrass was meant to be the center of attention on a stage and impress an audience with sheer musicianship.

The Highwoods String Band – by all accounts – made old-time music as exciting as bluegrass, but through a high, wild tightly wound ensemble playing, rather than through impressive soloing.

During the Folk Revival of the late 1950s and 1960s the New Lost City Ramblers performed near replicas of old-time recordings from the 1920s and ‘30s. From their beginnings as Fat City in the late ‘60s to their five-piece incarnation in the ‘70s, the Highwoods took a different tack. “We said, ‘The original old-time bands tried to sound like themselves, not some else,” Benford recalled. “We drew from the same sources [as New Lost City] but we made it sound like us.”

“In 1975 went to the Fox Hollow String Band Festival on the New York-Massachusetts border,” said fiddler and banjo player John Hoffmann. “Afterward they were having this all night contra dance and concert. We made our way over there through the woods at about 1 a.m. and it was Allan Block [Rory Block’s father] and the Highwoods. I just stood there transfixed for hours. Before this I figured musicians learned to play, got paid, and that was it. This was my first realization that they did this purely for the love of the music.”

Hoffmann and many of his generation coming of age in the 1970s began going down to fiddle festivals or “conventions” throughout the South, learning to play by listening to aging masters like fiddler Tommy Jarrell and banjo player Fred Cockerham at places like Union Grove and Galax.

“It was a full throttle experience,” said guitarist and banjo-ukelele player Jeff Claus of his first visit to Union Grove, North Carolina. “I went back the next year and brought [fiddler] Judy [Hyman] as a guest of the fiddler who was playing with us.”

“I learned a couple of fiddle tunes before I went down,” said the classically trained Hyman. “I when I say ‘a couple’ I mean a couple.” But she was hooked after that. “I started listening to LPs, made many more visits south, and then moved to the country.”

The young people who played old-time music in the ‘70s came from all over the country to congregate at the fiddling conventions in the South. “When we there,” said Hyman, “we didn’t sleep. We were having this intense experience together, and we all became the best friends ever.”

The Highwoods, slightly older than Claus, Hyman and Hoffmann, were touring the country after 1974. “We were making enough to stay in motels or hotels,” said Benford, “so we were sleeping on the couches of friends. To repay that hospitality we started to throw parties at home to host all those people who had helped us out on the road. Jeff and Judy came to the area for one of those parties.”

Highwoods fiddlers Walt Koken and Bob Potts moved to the Ithaca area in 1972, and Benford followed in 1973. These three had played together in the Bay Area as Fat City. In Ithaca they added bass player Jenny Cleland and guitarist Doug Dorschug. With a driving rhythm section – string bass was an unusual addition to an old-time band at the time – two fiddlers playing complementary styles and a banjo player picking out fiddler lines, the Highwoods had a potent, original sound.

In 1973 Danny Kornblum convinced John Specker to move from the Catskills to Ithaca and the two fiddlers formed the Correctone String Band. Specker grew up listening to Elvis, Chuck Berry, and the blues and preferred the Holy Modal Rounders to New Lost City Ramblers. The Correctones included Timmy Brown, who played the harmonica as if it were a button accordion, and John Hayward, who was able to plays runs of notes on a wash-tub bass.

As children in the 1970s Jeb and Jordan Puryear, Richie Stearns, and Shane Lamphier (the future members of Bubba George) went to Kosmos, the Trumansburg vegetarian restaurant to listen to the Correctone String Band. Specker took them under his wing, and they ended up down at the same fiddle conventions with Hyman, Claus, and Hoffmann.

“The Correctones had an impact,” said Hoffmann, “but they weren’t touring like the Highwoods.” The Correctone impact would be local. The band ended in 1976, and then the Highwoods ended in 1978. Hyman and Claus arrived in Ithaca in 1978. They convinced Hoffmann and then Hayward to join them in the Tompkins County Horse Flies. Benford had started up his Backwoods All-stars. Bubba George was in the process of synthesizing the influence of the Highwoods and Correctone approaches into the “Ithaca sound.”

“The Highwoods were not too responsible for that,” insisted Benford. “[The Ithaca sound] has a heavier backbeat and the style of bowing is mostly from John Specker.”

Hyman will have none of that. “The origin of the Ithaca sound is in the ‘flutter bowing’ of the Highwoods sound,” she said. “They were the beginning of the sound and then John Specker ‘islandized’ it.” The Correctones were influenced by the Bahamian guitarist Joseph Spence and weren’t above adding a conga to their sound, which was outrageous stuff in the ‘70s.

“This isn’t the South,” said Claus. “It’s upstate New York and everyone here is from somwhere else. The Highwood sound is closer to a certain type of root. In our generation we listened to a lot of rock and roll and came to old-time later in our musical development. But even among people our age, people from the South sound more southern.’

Hyman grew up in northern New Jersey. “I went to a mostly black school,” she said, “so I grew up listening to a lot of Motown and soul.” Consequently her fiddle playing does not have that “Southern, sweeping rolling sound,” but instead is marked by more backbeat and synchopation.

“Richie [Stearns], who is younger than we are, listened to a ton of reggae, which was getting popular then,” said Claus. “You bring all this to a party, and when people are together, they want to sound good together.” They ended up with, as Claus put it, “a beat that sounds like a train.”