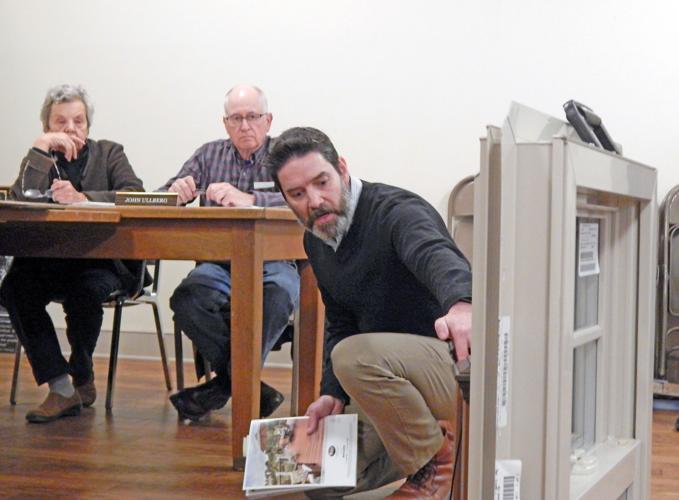 Steven Hugo, principal architect at HOLT Architects, shows the Trumansburg Village Planning Board a sample of the windows being considered for the residential units at 46 South Street at the board’s meeting March 28. 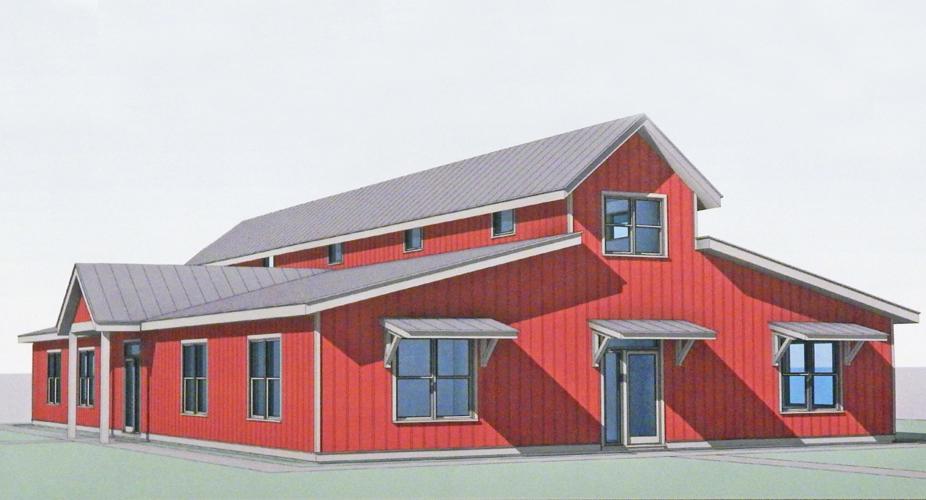 An artist’s rendering of the new nursery school planned for the proposed 46 South Street housing development in Trumansburg.

Exterior fixtures for residences at proposed housing development 46 South Street were a topic of debate March 28 at the Trumansburg Village Planning Board meeting.

The meeting was attended by about nine members of the public—far less than the 24 concerned residents who showed up to the board’s February meeting. The controversial development is in position to secure preliminary site plan approval by the Planning Board in May if all goes according to schedule, Adam Walters of Phillips Lytle, LLP, an attorney for the developers, told the board members.

The project is a partnership between Claudia Brenner, a local architect and landowner, and Ithaca Neighborhood Housing Services, a 40-year-old affordable housing not-for-profit based in Ithaca.

Additional details regarding the fencing and parking spaces for the residential units were provided by Ryan Kovac, landscape architect with Trowbridge Wolf Michaels, a landscaping firm with offices located in Ithaca.

New plans include additional fencing for the 10 for-sale affordable townhome units. The pair of adjacent but separate triplexes and the two attached duplexes are now slated to have more extensive fencing around the side and/or back of the properties, providing additional privacy, Kovac said.

Last month the Trumansburg Village Zoning Board of Appeals (ZBA) granted a variance on the parking lot for the residential units allowing 1.4 parking spaces for every one affordable rental unit and two for every for-sale unit. This is slightly higher than the 1.2 spaces the developers originally asked for; the increase is due to the ZBA’s request that the developers factor visitor parking spots into their calculations.

This means there will be a total of 144 parking spots on the site, including 22 for the nursery school.

Continuing a discussion that took place at the last meeting regarding water drainage, the board asked about the trees that will be planted on the property.

“There was a lady from the neighborhood at the last meeting who said the soil there is sandy and not particularly good at absorbing water and that it will be reliant on what the trees will do,” said Victoria Romanoff, Trumansburg Village Planning Board member, to which Kovac replied that the main takeaway is that the developers will be distributing a significant number of shade trees, which will help with the ground water situation.

Walters added that storm water rules do not take trees into account. “So then we have what I think is a very manageable system,” Walters said, “certainly way better than the existing conditions.”

Steven Hugo, principal architect at HOLT Architects, the Ithaca architectural design firm designing the buildings, showed the board some examples of what the exterior trim will look like, though the decking he brought to the meeting wasn’t exactly the same as what the architects are envisioning—he said he wasn’t able to get samples of the exact material in time, so he brought the next best thing.

The board members did not respond favorably to the sample Hugo showed them. Jessica Giles, Trumansburg Village Planning Board Chair, said she thought the board directed the architects at the last meeting to try to get away from vinyl and stick to wood.

The sample was not wood but a material called Trex composite; it was brown and had some extra detailing that Hugo said would not be present on the decks at the development.

“Trex is often used as decking as a replacement for wood and doesn’t quite have the plasticky feel to it,” said Walters.

“One reason you don’t like this profile is it looks like it’s trying to be wood but doesn’t come off as wood,” Hugo explained. “Once it’s white and in a more rectilinear shape it’s going to look like wood.”

“You’re right,” he added, “it won’t feel like wood. But we’re also partially wanting the building in 30 years to look great.” The posts will be white aluminum.

Hugo said HOLT believes white is the best color to use because it doesn’t fade. The fact that it is Trex composite decking instead of wood means it also won’t chip and doesn’t need to be painted. “It’s very low maintenance,” he said.

Giles did not find this explanation satisfactory. “From our experience in our village, this feels like institutionalization,” she said, “whereas a lot of porches and homes that we’ve seen don’t have this kind of material.”

Hugo seemed surprised at Giles’ assertion that vinyl is not used on very many homes in the village and said a sampling of homes could conducted to get a better idea of how many homes use wood versus vinyl.

There was one idea, brought up by Romanoff and supported by Giles, for an alternative solution: stainless steel with steel cables. The developers said the cables tend to slacken over time, requiring maintenance, and Hannah Carver, Planning Board member, said she did not think the industrial look of steel cables would fit the aesthetic of the village.

“Even though it’s pretty basic,” suggested John Ullberg, Planning Board member, “there is a material called hog panel that is very heavy duty screening used in farming. It’s a mesh, and it can be fit into a frame in such a way that this looks really good, and it only costs 20 bucks for 16 feet.”

Switching subjects to the nursery school, Brenner gave the board its first look at the proposed exterior facade. The building in the rendering shown was red with a dark roof; Brenner said it was designed to have a barn-like feel.

“We were looking for a a sort of rustic look but obviously a building that meets these days’ standards,” Brenner said. She said there will not be a second floor but that the roof may be slightly raised in the middle to allow for a skylight in the center of the building.

Romanoff said that aside from the development and its visual impact, she had lingering concerns about the connecting roadways. Neighboring property owner William Connor said in several letters to the board that by law streets that intersect with “collector streets” next to large subdivisions are required to be at least 500 feet apart. He also claims that South Street (where he resides) is too narrow to be a collector street.

“I don’t know if we every responded to this properly,” Romanoff said, encouraging the board to seek further legal advice.

Giles said Trumansburg Village Attorney Guy Krough gave his official opinion on the matter at the February meeting. He gave a detailed response to the concerns, Giles said; she added that his statements should be considered on the record because they were given verbally at a public meeting that was audio recorded.