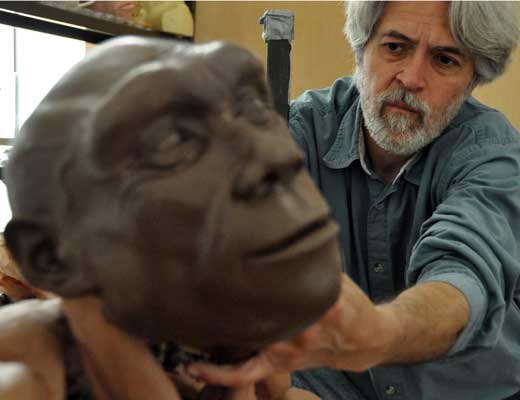 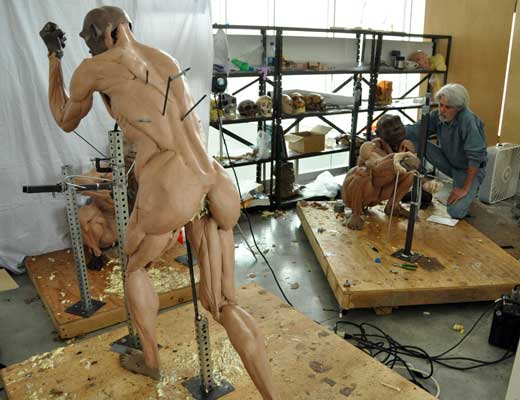 Imagine playing in the underbrush of a suburban backyard just outside Kansas City, Kansas. You find the skeleton of a mouse, and from this tiny, complicated structure of something that once lived, a seed of passion is born within you. A desire to understand the formations of all things living and have lived, to seek out the connections between life forms and to essentially figure out the 'how' of the Ultimate Question of life and its creation - how did we get to what we are today? This skeleton is the beginning of the rest of your life.

Many years have passed since John Gurche unearthed that mouse skeleton under the Kansas City sky, but one can see from his makeshift studio in the lobby of Ithaca's Museum of the Earth that the skeleton plays an integral part in his work today. As a matter of fact, one hangs, grinning, in the corner of his sun-lit space.

Gurche is a self-proclaimed Paleo-Artist. Paleontology is most commonly described as a science dealing with the life of past geological periods as known from fossil remains. The definition for 'art' remains more elusive, but one definition for art - as it seems appropriate to Gurche's work - applies to the quality, production, expression, or realm, according to aesthetic principles, of what is beautiful, appealing, or of more than ordinary significance. Gurche studies the life of past geological periods, combining an intimate understanding of life-forms and their structures and histories, with the skill and creativity of an artist to create 2-D and 3-D depictions of those things that might have once roamed the earth (and those that still do).

Gurche has been creating drawings, paintings and sculptures based on fossils and other scientific research since childhood. His work has been featured numerous times in National Geographic, Discover and Natural History magazines, and has been on display at the Smithsonian and the American Museum of Natural History, to name but a few. The blockbuster hit movie Jurassic Park consulted Gurche on the creation of their mechanical dinosaurs - making sure they were (somewhat) scientifically accurate. He also painted a series of dinosaurs for a 1989 collection of U.S. postal stamps.

As a youth, Gurche would explore the natural world around his home, the woodlands and creeks providing a rich assortment of specimens to uncover. "I remember seeing my first fossil. I was so blown away that such a little detailed, organized form could occur within a rock," says Gurche, a boyish excitement obvious in his expression. "By the time I was in fourth grade I was an avid fossil collector."

From a variety of different anatomy, evolutionary and paleontological texts, Gurche created an evolutionary tree, mapping out the evolution of life. A love of art and of creating art began to grow; the evolutionary science and the art used to create the tree showed Gurche a symbiotic relationship between the two disciplines that could only flourish.

In high school, science was eschewed in favor of girls and music, but art remained a crucial constant. "I made a lot of psychedelic posters. In fact, one of my first art jobs was painting psychedelic watermelons for 7-11," says Gurche.

2001: A Space Odyssey was particularly influential. "Sometimes you see a piece of art that changes your life, and boy was that the case," says Gurche, reminiscing on the first time he saw the iconic Stanley Kubrick film. "I think the part that got to me was just the enormity of the journey we're on, just how big it is and how far we've come, what a mind is and the fact that that evolved somehow... I came out of that knowing a couple of things about my future - one of those was that I had to do art, and I knew I had to study human origins - and then I knew I had to do art about human origins. And now, fast forward to what I'm doing today!"

As an undergraduate student, Gurche studied geology with a concentration in paleontology, continuing on to earn a Masters in physical anthropology and paleontology, both degrees from Kansas State University. It was the Smithsonian that lured him away from considering a Ph.D. degree, with an offer to bid on a job - his first 'official' Paleo-Art job. "I packed up my little Volkswagen, moved to D.C., got the job, and starved for a while. But I kept getting work doing this and I guess that's when everything started to take off," remembers Gurche.

Currently, one can find Gurche most days in his temporary workspace at the Museum of the Earth fervently working on a project to be installed in the Smithsonian sometime in late August. "I can't talk about it," says Gurche as he smiles secretively. "It will be unveiled at the Smithsonian in September... I can talk about it then."

But what we are allowed to see is the process of how Gurche creates the art that he does - in this case, 3-D models. Three figures in various poses and stages of production inhabit Gurche's studio, slowly being infused with a life that only an artist can bestow. Small windows allow the public a peek into the inner-workings of Gurche, although curtains are provided for when privacy is required.

Each human-shaped model represents a unique period in human history. The oldest figure characterizes a female Homo-Erectus, about one-million and a half years old. She stands, slightly hunched, weighted down by the antelope carcass she supports on her back.

The second figure crouches, arm extended, holding an as-of-yet undetermined dead-animal part. This is the male Homo-Heidelbergensis, and dates back a half-million years. The meat in his hand represents an age of stone-tools and the beginning of the concept of sharing. "Humans take food sharing to an unusual extent - some animals share food, but humans take it to the nth degree," says Gurche. "They also imbue it with symbolic meaning. There are complex social rules for how you share - [the Heidelbergensis] is aware that he is doing you an honor."

Third, and as of now also last in the series, is a female Homo-Neanderthalensis, with a thin stretch of hide clenched in her jaws. Living in the colder regions of Kenya, she represents the first time clothing is thought to have been worn. "It is believed that they used their teeth to process animal hides for clothing," comments Gurche, explaining the hide and the effect the processing had on the Neanderthal's jaws. On hand he has a Neanderthal skull, which he uses for reference, and points out an ill-fitting jaw.

The creation of each model is a process; the heads alone take around two months, individually. To begin, first a blueprint must be made of each body - and this only after intense research and study of actual fossils has been conducted. After a 2-D blueprint comes the 3-D skeleton, which is then painted to add rigidity. Next, muscles from clay and then skin must be added - some muscles can be done in groups, but most are shaped and placed independently.

The expressions of the figures - especially the eyes - are the last, and perhaps most important step in this many-month long project. This phase is where Gurche allows creativity to take over. "[This phase] is a subtly different form from the muscular form, but is enough to make it go, hopefully, from anatomy lesson to something that is vibrant and alive, has tension and motion.

"There is a fair amount of discussion about the expressions," says Gurche. "I don't like the idea of creating something that just looks like a museum mannequin that's kind of staring straight ahead. If you can't do some magic with it to make the museum goer react to it as if it were alive, then you might as well not even do it."

During this project, as happens with any that Gurche may embark on, new discoveries in the field of paleontology and human evolution have surfaced, causing him to head back to the drawing board on certain aspects of each figure. "It's tremendously exciting, if I worked 200 years from now, maybe all the exciting stuff would have been discovered, it's really great to be working at a time when this is brand new - it's kind of part of the process. Your work does go out of date fairly quickly; I expect in ten years, there will be parts of what I am doing that won't hold up any longer and maybe I'll come in with a little hammer," laughs John.

In essence, through his most recent work, Gurche portrays the beauty that is life - the beauty of the human form, its origins, and the incredible way humans have physically and mentally evolved over millions of years. Whether or not one believes itself to be a product of science, or an invention of a higher being brought forth to do his, her, or its higher bidding, it's hard to deny the beauty of creation.

Next year Gurche hopes to publish a book 14 years in the making. "It's not an Anatomy Atlas. Paleontology is a highly visual field because it deals with skulls, human form, and nobody, at least to my knowledge, has done a book that celebrates the visual aspect of anatomy," remarks Gurche.

For Gurche, science and art have always intertwined, and he views them as natural "bedfellows." "I'm hoping this book will inspire people by opening up this aesthetic channel that really hasn't been looked at very much before, I'm hoping there will be kids that see it and want to become Paleo-Anthropologists," he says.

For more information on John Gurche and his work visit www.gurche.com. His current work-in-progress can be found at the Museum of the Earth.