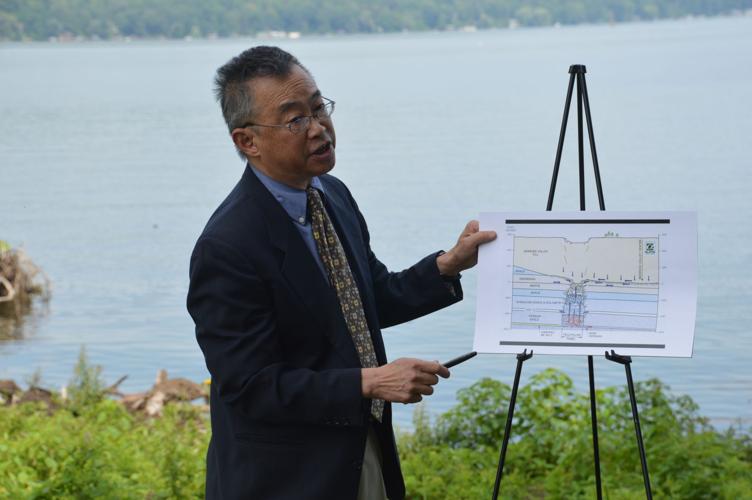 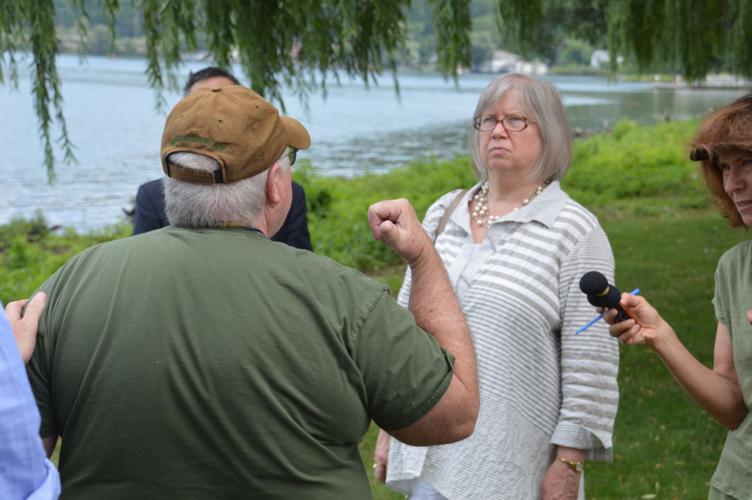 Long the subject of scrutiny by the local scientific community, the Cargill Salt Mine in Lansing has attracted the attention of Tompkins County’s voice on the New York State Assembly, Barbara Lifton, who has joined the group of those opposed to further salt mining under Cayuga Lake.

In a press conference on the shores of Cayuga Lake on Thursday Lifton, joined by activist and founder of local environmental research firm Toxics Targeting Walter Hang, announced a proposal to call for a moratorium on any additional mining under Cayuga Lake while, in the meantime, urging Cargill to pursue mining under the stable ground of the land surrounding the lake.

The announcement comes after data produced by Dr. Richard A. Young, an expert on salt mining at SUNY Geneseo, was presented at a meeting in Albany on June 15 attended by Assemblyman Steve Englebright, Chair of the Assembly’s Committee on Environmental Conservation, and high-level Department of Environmental Conservation (DEC) officials, outlining concerns that expanded salt mining under Cayuga Lake could pose potentially catastrophic risks to the lake in the event of a mine failure. Young, whose expertise includes extension study of a 1994 salt mine collapse in Livingston County, presented a new study drawing certain parallels between the conditions of the Retsof salt mine collapse and those present at the Cargill site, urging DEC officials to reconsider their approval of Cargill’s mining operations as it works to dig a new mine shaft for its workers.

In a letter to DEC Commissioner Basil Seggos, Lifton – who at this point has yet to meet with Cargill officials or members of government in the Town of Lansing – and Englebright call for the DEC to prohibit future mining activities under Cayuga Lake, stating the information created a “growing concern” about Cargill’s application to drill a new egress shaft for its workers to improve ventilation for its employees 45 minutes from the surface and, in theory, allow the 18,000 acre mine’s continued push up the length of the lake.

Though the proposed shaft itself presents little to no inherent risks, the continuation of mining under the lake has raised concerns among the mine’s opponents: according to Young’s research, the mine’s construction and the geologic anomalies of the mine present risks resembling those apparent in the Restof mine collapse.

“If the Cargill mine suffered a similar disaster, the potential catastrophic effects on Cayuga Lake would be unprecedented and irreversible,” Lifton said.

Citing the potential threat of such a moratorium to the jobs of 200 people, Lifton suggested as an alternative to focus on mining under the adjoining dry land instead, an arduous process that would involve negotiations with multiple landowners for the rights to the minerals thousands of feet below.

The press conference itself rowdy at times, Lifton and Hang were confronted by a number of supporters for the mine who casted doubts on the legitimacy of activist’s concerns. David Cornelius, a former surveyor in the Cargill Salt Mine, called Hang an “alarmist,” with several supporters from the mine bringing up inconsistencies or perceived inaccuracies in the portrayal of the danger present in mining under the lake including, according to one person in attendance, significant differences in the pillaring of the Retsof mine – the nature of which may have led to the mine’s collapse – versus the relatively new “small pillar” system employed in the Cayuga mine. Notably enough, according to local environmental activist John Dennis, the construction of the Restof mine was done on the recommendation of current Cargill engineer Gary Peterson, who currently oversees the layout and construction of the mine in Lansing.

According to Mine Manager Shawn Wilczynski, the new studies presented by Young are nothing new and the perceived lack of oversight by the DEC, overstated.

In 1995, Cargill initiated a seven year process to create an advanced environmental assessment of the mine’s surroundings, a highly advanced geological assessment whose team included two geology PHDs and a comprehensive survey of all available data from the United States Geological Survey. Since its completion, that study has been used as a baseline for all of Cargill’s independent assessments of the mine’s safety, a document which is reviewed on an annual basis with the DEC in the form of an individual mine stability analysis. That survey then goes through several independent reviews before acceptance by the state.

“Every single year, the mine’s stability, the mine’s plans… everything is gone over,” Wilczynski said. “The DEC – as lead agency – has been providing tremendous oversight over this. We all do share the same thing – the protection of this lake is the paramount thing to everybody – and we’re members of this community as well. We’re reminded every single day of where we work. That lake is a constant reminder of that.”

“The main reason we want to do this is for the health and safety of our employees,” Wilczynski said, who noted that the trip 1,400 feet below the surface takes approximately 45 minutes to travel. “It’s frustrating that fact gets lost when it really is that simple.”

For Lansing’s County Legislator, Mike Sigler, the prospect of derailing one of Lansing’s largest employers because of a lack of trust in the judgement of the DEC is an unreasonable one.

“The science isn’t good enough for them apparently,” Sigler said. “A lot of people trust the DEC. Apparently these people don’t.”

He added: “It’s just one more moratorium for Lansing.”

This story will be updated.

Do you support the City of Ithaca and Tompkins County investing in a sanctioned homeless encampment like TIDES?