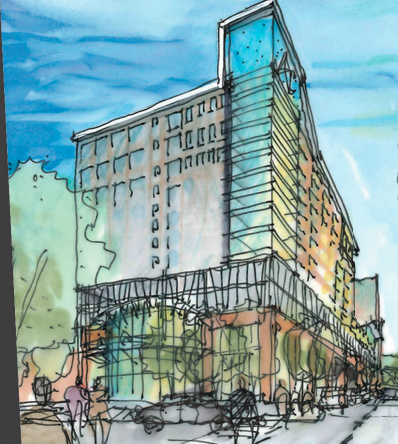 Asteri Ithaca, proposed by Vecino Group, was chosen late last year as the preferred developer for the Green Street Garage.

The monthly rent estimates, as of July, from Vecino Group for the Asteri Ithaca project at the Green Street Garage.

The talks between the City of Ithaca and development firm Vecino Group will continue until the end of July after the two parties agreed on an extension of the original negotiation period about the Green Street Garage’s redevelopment future.

The Ithaca Urban Renewal Agency (IURA) will meet at the end of the month to approve the development and disposition agreement (DDA) regarding the Green Street Garage, which will then be passed back to Vecino for consideration. If they agree, the development process starts in earnest.

The primary aspect of the proposal that is currently hanging in the balance is the oft-discussed conference center. As it stands now, Vecino will propose three different plans to the City of Ithaca for review, one that includes a conference center and two that do not. Which of those plans advance for consideration may rest on the results of the follow-up feasibility study, which has been conducted over the last several months to more deeply assess demand and need for a conference center downtown. A study was already completed in 2017 that indicated the Ithaca market could indeed support a conference center.

While the situation still seems fluid, there are now at least three different versions of the plan being discussed: two without a conference center, and one that includes a conference center. The one proposal with a conference center would include nine stories of residential housing, with 218 units total, plus a two-story ground-floor conference center that would be 49,000 square feet, a significant increase in size over what had been originally requested of developers by the city, which was around 30,000 (the rise, according to the meeting’s agenda, was due to financial feasibility assessments). The other two options, which exclude a conference center, are essentially large and small versions of each other: both have 9,000 square feet of commercial space (“anchored by local grocery”) that would take up a single story, but one has seven stories and 173 units on top of that, while the other has 11 and 273, respectively. Just like when Vecino was picked, all the units would be considered affordable housing, rented to people making 50-80 percent of the area median income (according to calculations done last year, that translates to $657/month for a studio and up to $1484/per month for a three bedroom).

UPDATE: Here are the latest projections for monthly rents from Vecino.

In an interview, IURA Economic Development Chair Chris Proulx said the city has not cooled on the idea of a conference center, but simply wants to prepare for the possibility that the center, particularly at its new and larger size, could end up financially impossible for Vecino.

“We’re open for whatever you guys want—we’re here to build affordable housing,” Vecino Group President Rick Manzardo said during last week’s IURA meeting, at which the proposal was discussed at length.

“It would be helpful by next month if we can determine which alternative is preferred,” Bohn said.

Proulx did broach the possibility of having too many affordable housing units coming on at the same time, a thought that probably seems ludicrous to anyone that’s followed City of Ithaca issues over the last few years, but is of legitimate concern to city officials. As noted in an evaluation by Bohn of the project’s different alternatives, the 273-unit proposal could satisfy the city’s affordable housing demand for people making 50-60 percent of the area medium income, which would be beneficial; simultaneously, the city uses that demand to cull funds from the Low Income Housing Tax Credit for other projects, which could hurt other projects around town.

“We want more affordable housing, but what happens if we bring too many in at one time?” Proulx said. “If you look at the numbers, you say, ‘Great, we’re getting 273 units, but are they 273 of the right units?’”

Alderperson Laura Lewis, an outspoken affordable housing advocate and former member of the Ithaca Neighborhood Housing Services board, agreed with Proulx, though she admitted it felt odd to ask for a lower number of units.

“Right now, I would still lean towards the smaller, which is 173 units,” Lewis said.

Manzardo said the property manager Vecino has engaged with for the project could attend next month’s meeting to answer questions and allow IURA members to familiarize themselves with the group. Ithaca Neighborhood Housing Services had been attached to the project as property manager but dropped out last year when they became concerned about managing the high number of units.

While there was brief discussion of the new Ithaca Properties proposal, which would bring an 11-story, 182-unit apartment building to the other side of the Green Street Garage, at this stage it does not sound as if that project and the Vecino development, if both approved, would interfere with each other.