Ithaca Police Officer Christine Barksdale, who's at the center of the recent announcement by the City of Ithaca regarding a decade of "deeply troubling" investigatory failures in IPD's Investigations Division, filed a New York State Division of Human Rights (DHR) complaint early last year alleging discrimination by the city based on gender and race. Last month, DHR ruled against Barksdale, clearing the City of Ithaca, Ithaca Police Department and Deputy Chief John Joly of workplace wrongdoing.

Barksdale was the subject of a press release last week that detailed inadequate investigations into a litany of crimes over the past several years by an investigator at IPD, later confirmed to be Barksdale. She was a highly decorated and respected officer, having joined the department in 1997 and, most publicly, received the J. Diann Sams Annual African-American History Month Recognition last February before Common Council. Sources have said around 200 cases under Barksdale are in question over the last 10 years, including about 80 cases dealing with sex crimes. The City of Ithaca also announced a batch of reforms to the department aimed at preventing a similar situation from occurring again. IPD Police Chief Dennis Nayor called the situation an "appalling failure," while Mayor Svante Myrick said he was "shocked and saddened."

The DHR complaint was originally filed by Barksdale on June 14, 2019. According to the decision, obtained by the Ithaca Times through a Freedom of Information Law request, Barksdale alleged that a higher member of IPD, Lieutenant John Joly (who has since been promoted to Deputy Chief), was racist, misogynistic and had discriminated against Barksdale, a black woman, at work, creating a hostile work environment for her inside of IPD. Joly was placed in charge of the Criminal Investigations Division, where Barksdale worked, in March 2019. A decision was rendered by DHR on Dec. 10, 2019, which found no basis for Barksdale's complaint. The decision can be read in full at the bottom of this page.

"After investigation, and following opportunity to review of related information and evidence by the named parties, the Division has determined that there is NO PROBABLE CAUSE to believe that the respondents have engaged in or are engaging in the unlawful discriminatory practice complained of," the decision said. "The investigation found no evidence to indicate that the Complainant was subject to unlawful discrimination on the basis of sex or race."

As the Ithaca Times reported last week from sources, Barksdale is the only officer for whom termination is being considered as a result of the situation, though other officers are being punished internally for their role in not reporting the inadequate investigations. Barksdale was issued a termination notice, and now must either accept the punishment or undergo arbitration. Ithaca Police Benevolent Association President Eric Doane previously told the Ithaca Times the union "will vigorously defend" its members and told CNY Central last week that the case backlog had less to do with Barksdale and more to do with the oft-claimed understaffing issues at the department. A request for follow-up comment from Doane has not yet been answered.

DHR's findings went on to say that Barksdale had failed to show evidence of the far-reaching claims she made regarding unfair treatment by Joly. When reached last week, Barksdale said she had no comment on the ongoing situation.

"Other than making conclusory allegations, Complainant failed to produce any evidence to support this claim," the decision reads. "Complainant's own subjective belief, absent further proof, is insufficient to support a finding of discrimination."

Barksdale had based her complaint on four primary points, according to the decision:

The decision details that Barksdale felt alienated when her requests to be switched to Criminal Investigations Unit weren't fulfilled, and that she told Joly she no longer wanted to handle sex crime cases. DHR's investigation found that after that request, Barksdale acknowledged she wasn't given any more sex crime cases; the investigation also determined that she wasn't transferred to CIU because there weren't any openings (though Barksdale claims no openings were intentionally created to keep her out of CIU).

There's also some semantics involved in another point of DHR's ruling: Barksdale claims that when she was served a counseling memo by Joly, that constituted an unfair discipline and that it was part of him targeting her for being a black woman. DHR ruled that a counseling memo, which in this case was meant to warn Barksdale that further violation of the IPD rules to "comply with all lawful orders" would be considered insubordination, did not constitute an actual disciplinary measure. Soon after, Barksdale was reassigned from the Investigations Division to patrol as a result of her sizable open case log, which DHR found as a reasonable and justified response, especially considering Barksdale did not lose title or salary, according to the decision.

While the investigation basically fully exonerates the City of Ithaca, IPD and Joly of Barksdale's allegations, it's not entirely clean for all of them. Joly's participation in former IPD officer Chris Miller's lawsuit is mentioned as one of the primary reasons Barksdale thought of him as racist, since Joly testified in 2012 that he felt "minorities received more favorable treatment in the department," according to the decision. Miller filed his lawsuit against the city in 2010 alleging discrimination against himself due to being white; he was originally awarded $2 million, but that decision was then thrown out as excessive and in a follow-up case he was awarded almost $500,000 in 2015, though that case is now heading to its fourth retrial this year. Further, the decision notes that "it also became known that Lt. Joly may read/be involved in websites where other individuals were known to make racist comments," but that the investigation couldn't connect Joly's 2012 testimony to Barksdale's reassignment. Joly was recently promoted to Deputy Chief under Nayor. A request sent to Joly for comment on that portion of the investigation has not yet been returned. 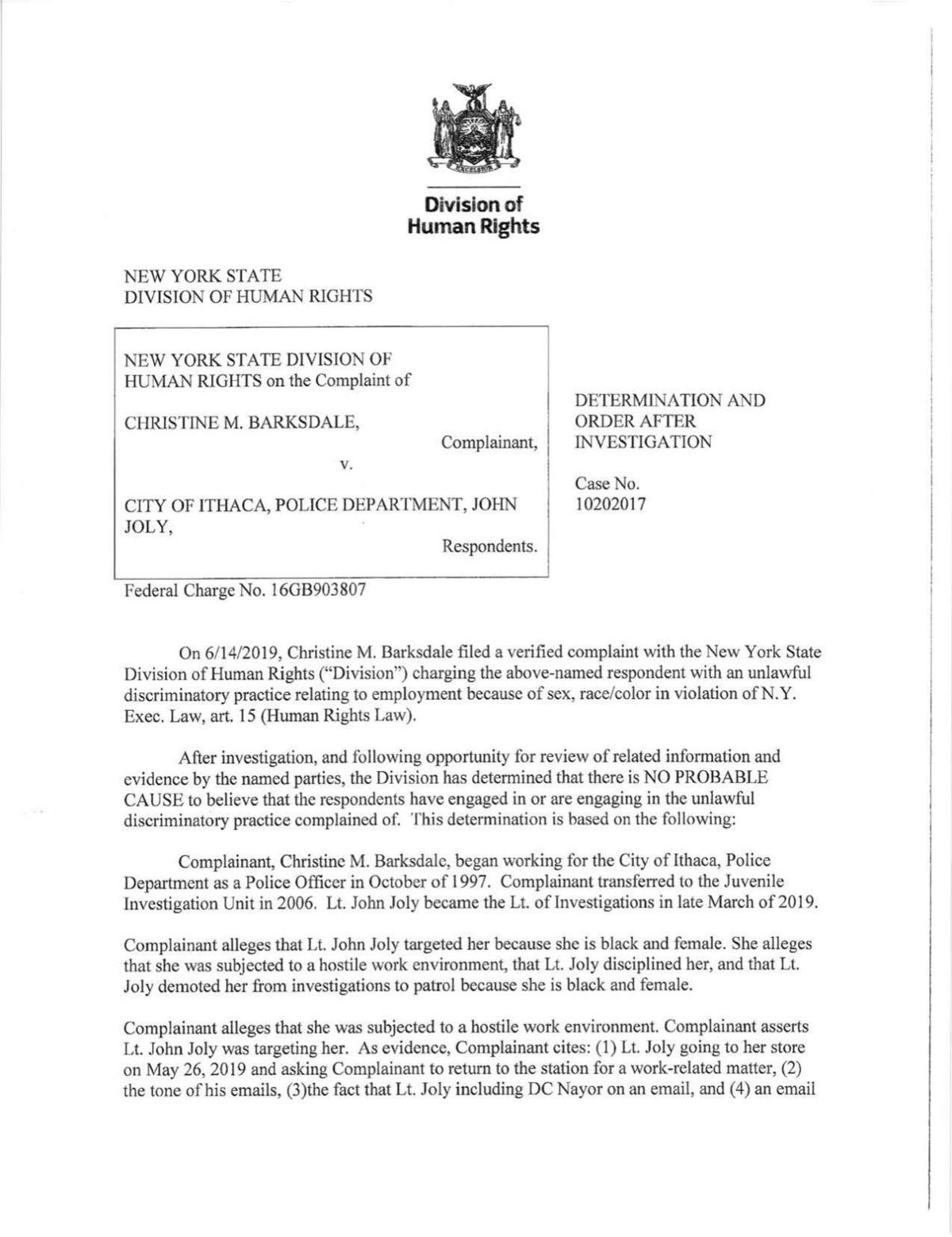