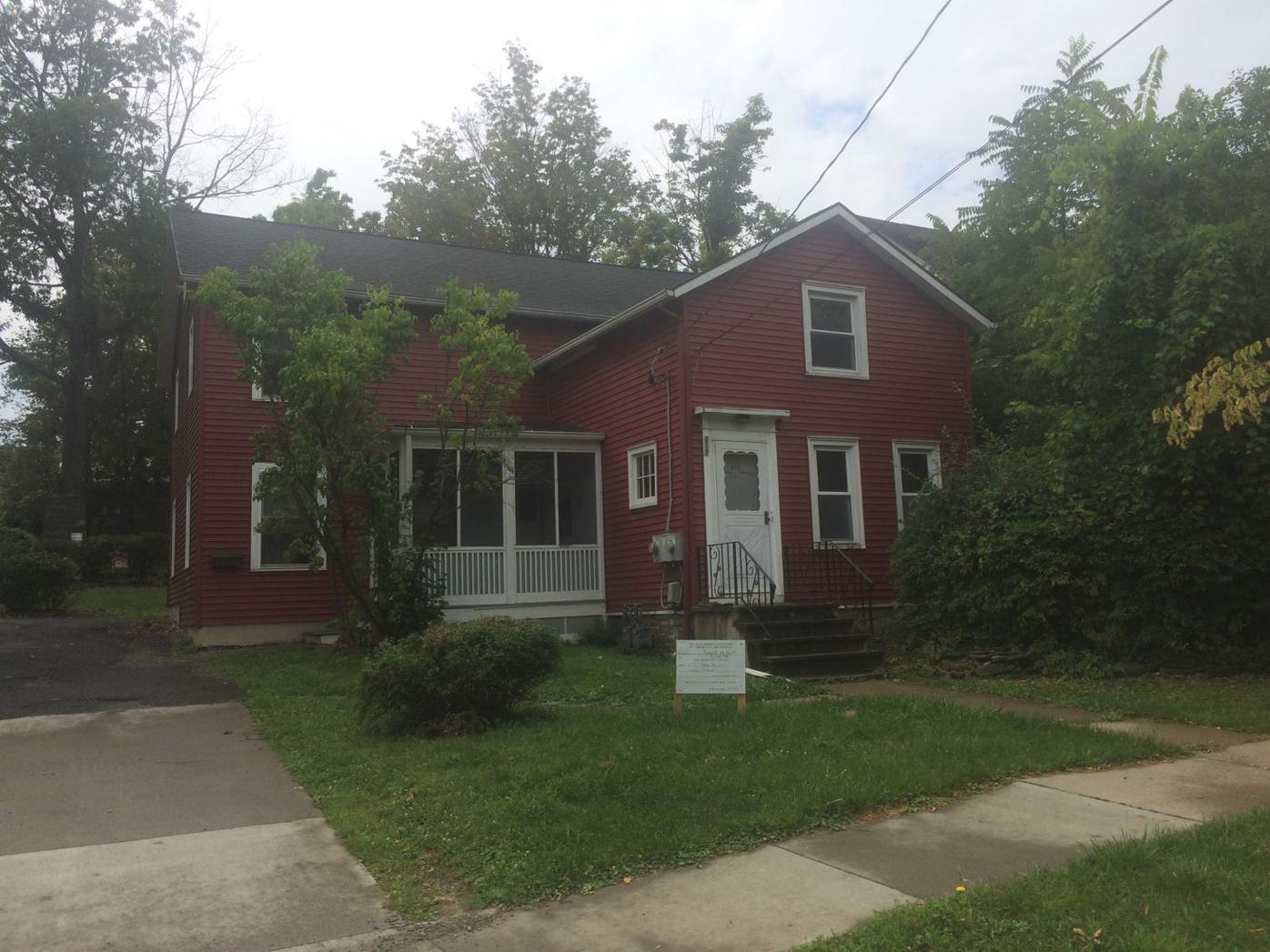 The property in question, at 217 Columbia Street. 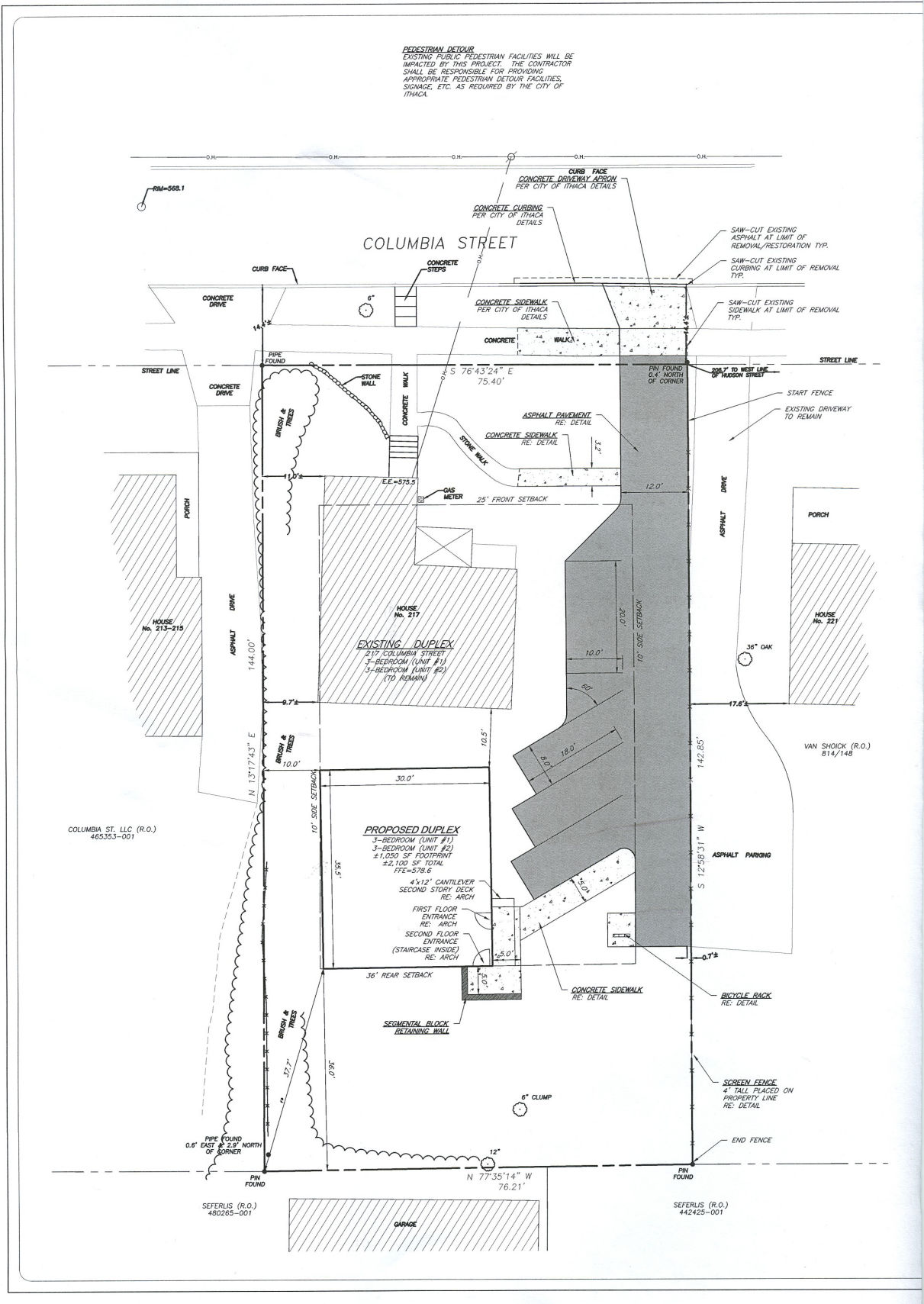 Some of the teeth were taken out of the debate early: Modern Living Rentals' Charlie O'Connor, who purchased the property, announced at the meeting that the community's feedback had persuaded him to change his plan for the property-- instead of aiming for students, he said he is now going to market the property's new duplex to "families and professionals," though South Hill residents had mainly raised the concern last meeting that the student population in the neighborhood has gotten out of hand, and another property with more construction (for another dwelling) would invite more students.

"With everything I've heard from the community, I decided it would be best to not put any more students there," O'Connor said.

While he did commit to avoiding students at the new duplex, he said he has not yet made that type of decision about the current house that sits on the property at 217 Columbia Street, leaving neighbors' concerns partially answered but not totally allayed.

As for keeping just the single dwelling on the property, and forgetting the second house altogether, as was argued throughout the meeting? O'Conner asserted the price he paid for the land demanded another rental structure to make it financially worthwhile.

O'Connor made an opening statement that highlighted one of the points he has tried to push throughout this process: he cares about the community, something he is trying to show through attending community meetings like Thursday night. Otherwise, he would simply go to the Planning Board, jump through whatever hoops they presented to get approved, and be on his way.

The developer also said the discussion has become tainted by people who support more housing in Ithaca in general but only when it doesn't directly affect them (Not In My Backyard-ism, or NIMBYism as it is often termed). People support the benefits that more housing brings with it, such as increased density and a more robust tax base, but when it comes to their neighborhoods the support turns.

O'Connor is balancing keeping the peace with potential neighbors with the fact that he's already purchased the land, and turning a profit on a valuable piece of property. The neighbors at the meeting seemed suspicious, many noting that if O'Connor ended up selling the property there would be a replay of the current dispute. As it stands, he does still intend to build an additional duplex on the property which, he pointed out, is his right as the property owner.

Alderpeople Cynthia Brock and George McGonigal, who represent South Hill and had previously met with O'Connor, were also in attendance. Brock served as a sort of unofficial moderator. She addressed the dueling solutions that were discussed last week at PEDC: either a full zoning change for the area to prevent future situations like this (Brock's suggestion), or a building moratorium on South Hill while a study is conducted and a neighborhood plan is contemplated. Zoning changes were not a topic, though, as O'Connor's proposal meets all current zoning requirements.

O'Connor said he'd already put $40,000 into the property to rehabilitate and improve it. At the conclusion of the meeting, he said he and his team were returning to their design in the coming days and would be considering some of the suggestions that came up at the meeting, some of which pertained to interior design changes but also which dealt with the exterior changes O'Connor could make to the existing house (and choices he could make in advance of constructing the other house). O'Connor said at the meeting he intends to do some interior remodeling, but has not yet made decisions on the exterior of the existing duplex.

The meeting wasn't free of tense moments, though, reminiscent of last week's fiery public reaction. South Hill resident Ken Young challenged O'Connor's ability to attract non-students to the property with its current design, and whether he could make the new structure affordable for families or professionals. Other objections included encroachment on the surrounding properties and traffic patterns that would result from another driveway on the street.

"You've ignored the basic parameters of what a living structure is," Young said. "I appreciate the work you went to to make it aesthetically more attractive, and it looks 100 percent better [...] But you can only do so much."

The neighborhood was generally thankful for even the chance to talk to O'Connor. In the end, though, most still seemed against the proposed construction.