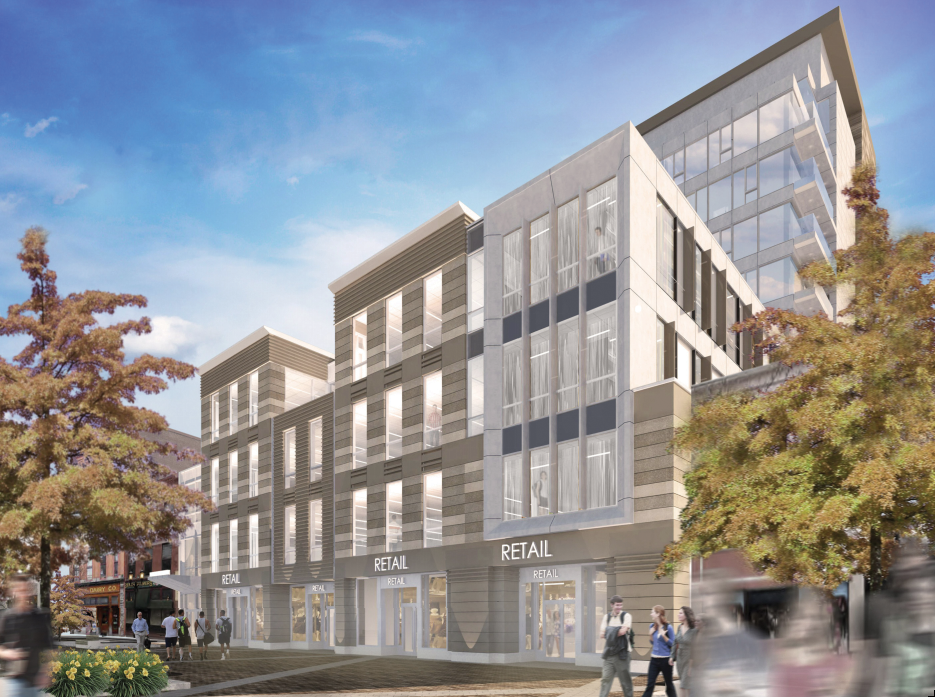 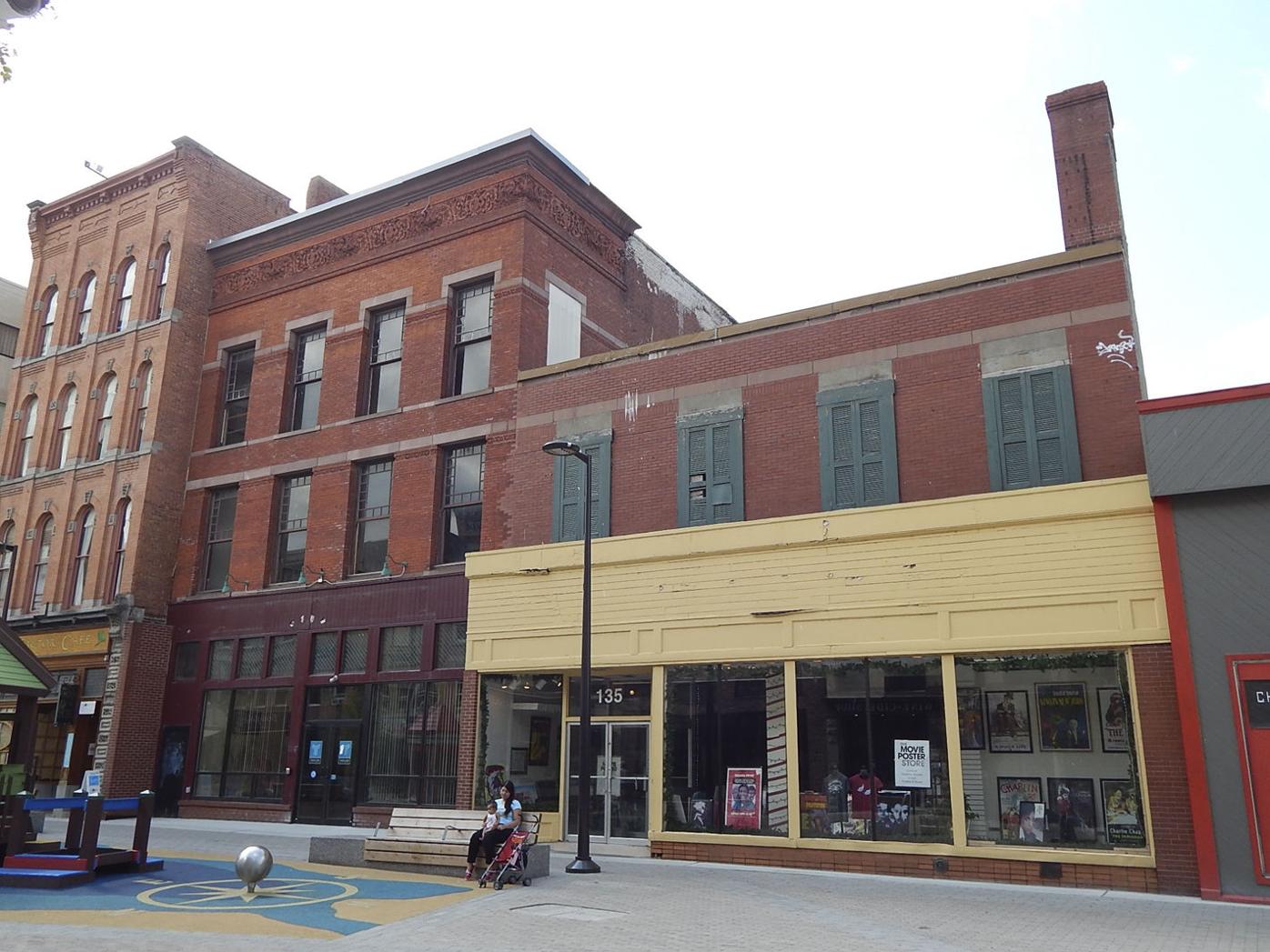 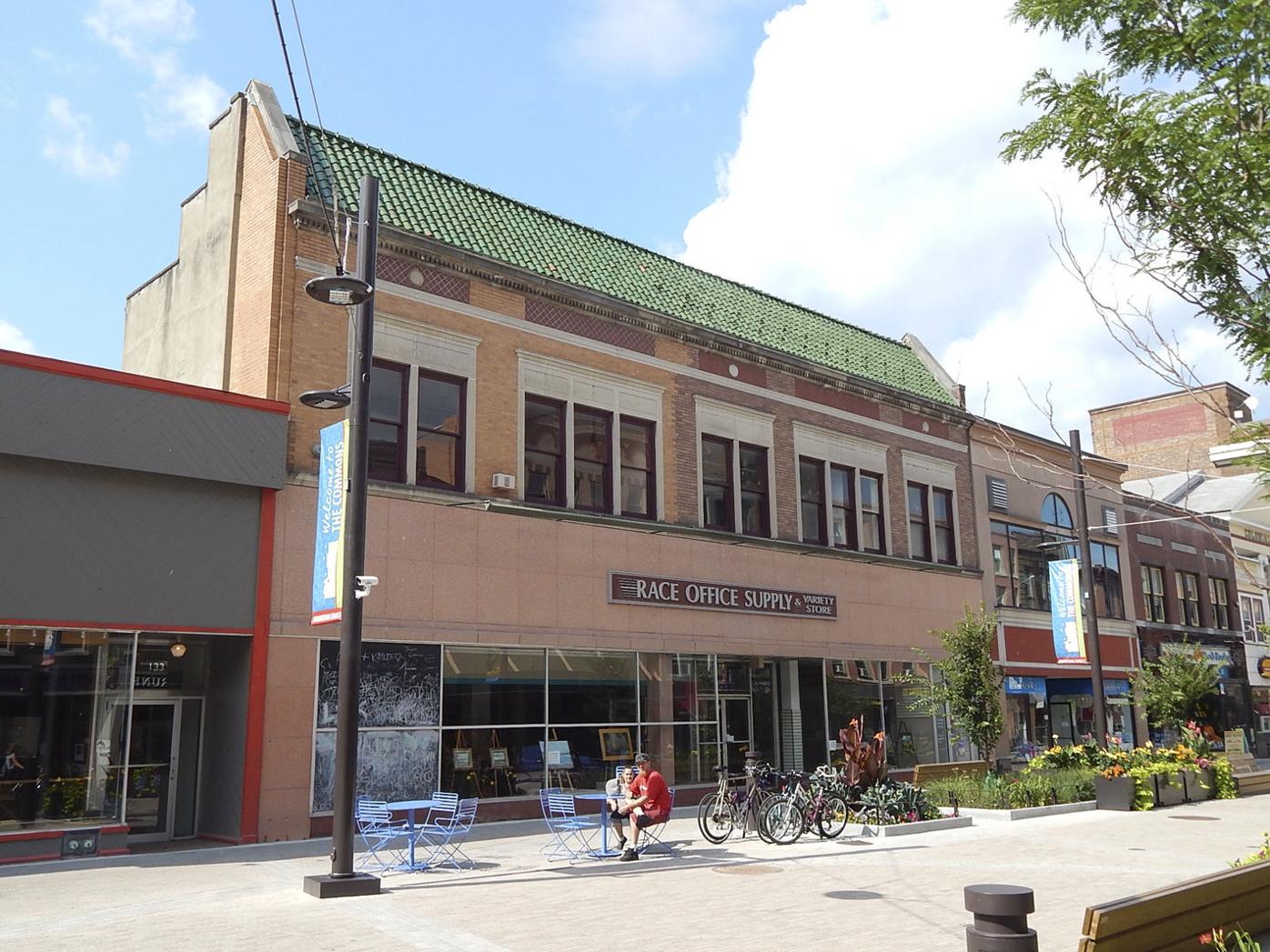 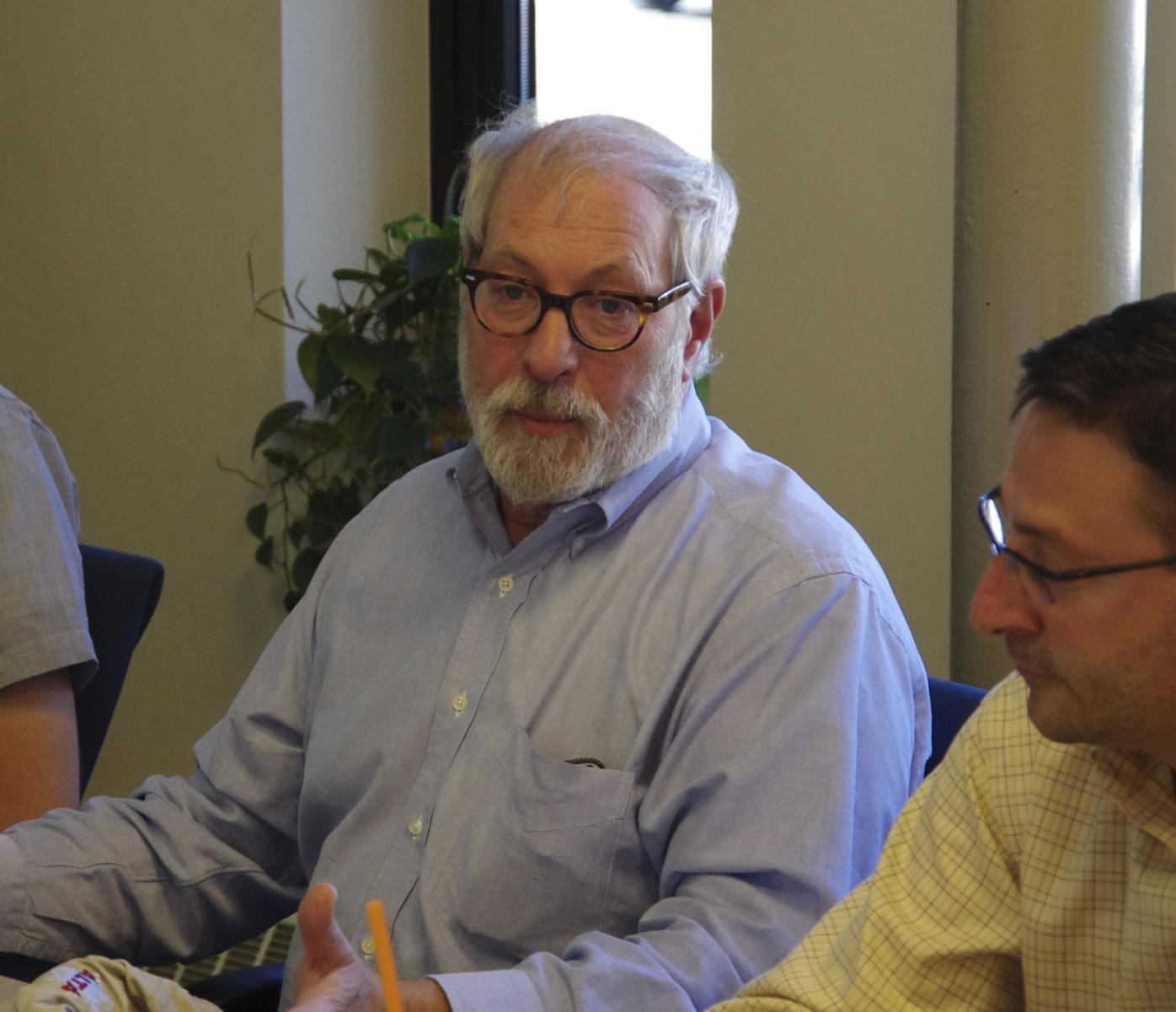 There has been a great stir every time a building higher than five stories is proposed for downtown Ithaca. Most recently the developer Campus Advantage proposed an 11-story building on the site of the one-story Trebloc building at the corner of South Aurora and East State streets.

According to a 2015 post at their website, Campus Advantage believed, “The new development will offer a product unlike any other in the marketplace starting in fall 2018.” They had intended to introduce their “award-winning program Students First™.” After having their design critiqued by the city planning board and criticized by the general public, Campus Advantage withdrew. Last month, Newman Development of Vestal announced plans for a nine-story building with market-rate apartments and ground-floor retail. The student market was not the target and the reception of this proposal was relatively muted. This might be good news for L Enterprises LLC as they restart the process of building Harold’s Square, a proposed 11-story building between East State (the Commons) and East Green streets.

Originally announced in spring 2013, Harold’s Square is the project of David Lubin, whose father Harold once had a clothing store on the site. The Lubins owned a chain of stores for many years, but got out of the retail business in the mid 1990s. Lubin said at the time he became aware of on line sales through the internet and began to tell his suppliers that he would be happy to sell their products through his stores’ website. His suppliers told him, thanks, but no thanks; we’ll be selling our clothes over the internet ourselves. Lubin decided that the future of retail was going to be quite different than what he had known and opted out around 1997.

The Scale of Harold’s Square

The Harold’s Square project will incorporate the existing Sage Block building at 137-139 The Commons, historically the site of architect William H. Miller’s office. A McDonald’s that went out of business memorably occupied its first floor and then Benchwarmers, a sports bar. It is now a financial services office. The storefronts that now are home to the movie poster store, a office for the Chainworks District (another Lubin project), and the empty former Race Office Supply will be torn down and replaced with new four-story buildings.

“They will be articulated into separate parts,” said planner C.J. Randall of Randall + West and a former member of the city planning board. “They will look like individual storefronts instead of a monotonous façade.” The pedestrian, she said, is looking for visual interest to lead them on. Planners and developers now understand that if people are encouraged to move down a street out of curiosity, they will shop more. She contrasted this approach with that of Center Ithaca, which she described as “of its time.” Center Ithaca is 35 years old; it was built in 1981.

According to an article by Rob Montana in the March 13, 2013 Ithaca Times, as originally proposed Harold’s Square was going to 126,000 square feet (SF), including 16,000 SF of ground-floor retail space, 47,000 SF of professional office space on the next three floors, and 36 market-rate apartments in a six-story tower, which to be set back 75 feet behind the Commons façade.

The building was meant to be “U.S. Green Building Council’s LEED guidelines, with emphasis on energy efficiency, natural light, healthy work and living space, and the incorporation of natural green rooftop elements on the four-story portion of the project,” wrote Montana in 2013.

“The design is done with a few different features,” said Lubin in 2013, “we put a balcony in there, to give it a rhythm,” he added. “It won’t be one roof line, so it doesn’t look like a solid, 130-foot building face. But, we also wanted to make it have a more classic look to keep it in context with the Commons, which is more or less a historic site.”

The Commons is, in fact, on the National Register (like the Cornell Arts Quad, Cornell Heights, Dewitt Park and several other places in Ithaca). The part of the proposed building on the Commons is in the CBD (Central Business District)-60 zone; the maximum building height is 60 feet. The location of the proposed tower of apartments is in CBD-140; it can be 140 feet tall. The original plan was to make the 11th floor a penthouse, which would bring it up right up to the 140-foot mark.

The set back from the Commons façade was stated as 62 feet, 8 inches in the variances that L Enterprises applied for and received from the city. One variance allowed them to go without a rear yard (which is not present behind the existing buildings either). In a subsequent variance application the building had grown to 12 stories. L Enterprises will not have to build the requisite number of loading docks (they will located in space shared with the city) and might slightly exceed the 140-foot maximum height.

Harold’s Square was originally approved in August 2013 with a CIITAP tax abatement package approved by the county IDA in October 2013.

In 2015 we stopped hearing about Harold’s Square. The original division of uses was not going to work. “We redesigned the building to some degree,” Lubin said. “We reduced the amount of office space because I didn’t have tenants who were willing to sign up. I had 15,000 square-foot floor plates and I needed two of them rented before the bank would finance the project. If it were built, I could probably find tenants, I couldn’t do it without the financing.”

As redesigned the building will now have 11,500 SF of retail space on the ground floor and 25,000 SF of office space (including 11,600 SF in the renovated Sage Block). Two floors of office space are now going to be residential, and the number of apartments has now increased to 104. Of these 40 are now advertised as “studios,” as well as 30 one-bedroom and 30 two-bedroom units. (This represents a further increase from an interim 2015 plan for 86 apartments, which had been re-approved by the planning board in August 2015.)

The studios are a new addition. According to Lubin, they are more properly called “micros,” because there are many features—including Murphy beds (which fold into the wall), storage, and some of the furnishings—that will be built-in.

Brian Crandall, in his “Ithacating in Cornell Heights” blog, has reported that Lubin has applied for Restore NY grants, which are for reconstruction of historically significant properties. This has been broken into two segments. A $500,000 grant request has been made for the $2.5 million Sage Block rebuild, which is clearly a renovation of a historical building. A separate request for the same amount was made for the rest of the project, which is to cost $36 to $38 million. Crandall noted, however, that the Ithaca Urban Renewal Agency (IURA) questioned as to whether the rest of the Harold’s Square project would qualify as reconstruction.

“Often, with any project of this scale, there is a lot going on with it,” said Scott Whitham of Whitham Planning & Design, which has been coordinating all the review and permitting aspects of the Harold Square development project. “This is a prime spot in the city, a street wall right on the Commons, so it’s important to get this right. The financials have to be right as well.”

Variances need to be renewed after two years. In fall 2015 Whitham took the variances that had been granted to Harold’s Square in 2013 back to the board of zoning appeals. They re-approved them.

“The changes from the approved plan are not significant,” said Lubin. “The city is unlikely to balk.”

Whitham, who has not seen the latest revision of the design by CJS (Chantreuil, Jensen, and Stark) Architects of Buffalo and Rochester, said the final elevations are being readied now. “Any program changes that may be expressed on the exterior [have to be looked at by city planners]. The point is not to do that,” he said. “This will go to the [City of Ithaca] planning department for a conversation about what the trajectory of the project will be. It may be only subject to an internal staff review if the changes are not substantial.”

Whitham said that if the changes from office to residential use primarily involved moving internal corridors, then it would not be expressed on the exterior of the building and would not be deemed a “substantial” change. “It there were changes to the massing, for example, then the planning board would want to see it again,” he said. The planning department would bring it back to the volunteer city board. Whitham has escorted the project through the planning board and board of zoning appeals twice already.

When completed the tower of Harold’s Square will be, at 140 feet, the tallest building in downtown Ithaca. However, it will not be the tallest building in Ithaca. That privilege goes to the 15-story, 180-foot Titus Towers 1, which was built in 1972. It will be only 20 feet taller than the Hotel Ithaca tower and 19 feet taller than Seneca Place (home to the Hilton on East Seneca Street). The Marriott and the proposed Trebloc building are to be 120 feet tall.

“During the approval process,” said Whitham, “we got a lot of support for the design because of the step back.”

Randall, the planner, noted the city’s desperate need for housing; Harold’s Square now offers even more with the same footprint as originally proposed.

She recalled that during her time on the planning board, that the board’s chief initial concern was that historic structures would be demolished to erect the new building. Further examination of the building that holds the former Race Office Supply, however, revealed that the upstairs office space had been “tacked on.”

And Lubin had proposed saving the Sage Block from the beginning. “We’ve been looking at that since the 1980s,” he said. “There was never enough space to make it handicapped accessible. But building all around it makes that work.”•