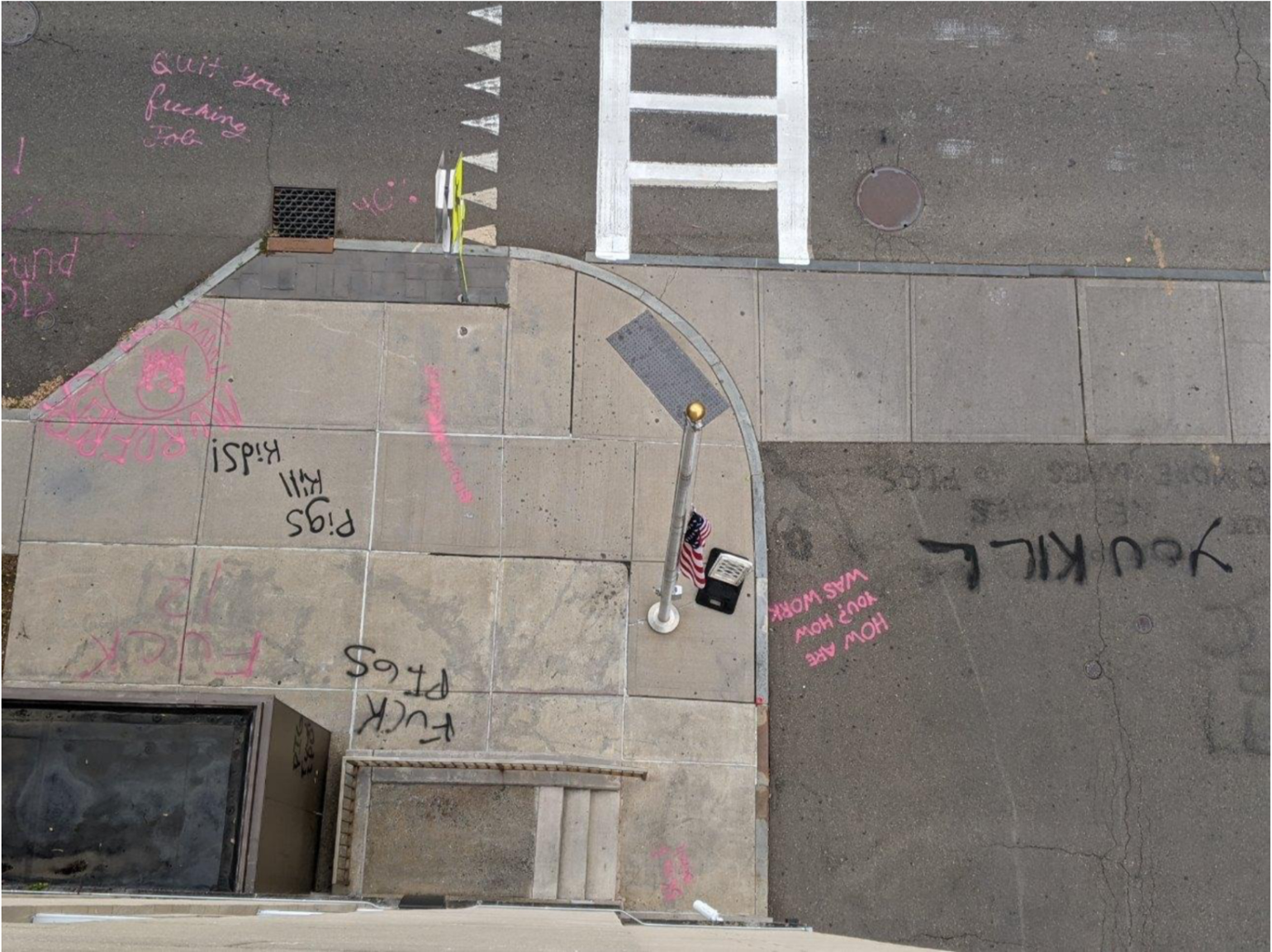 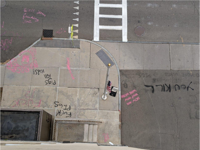 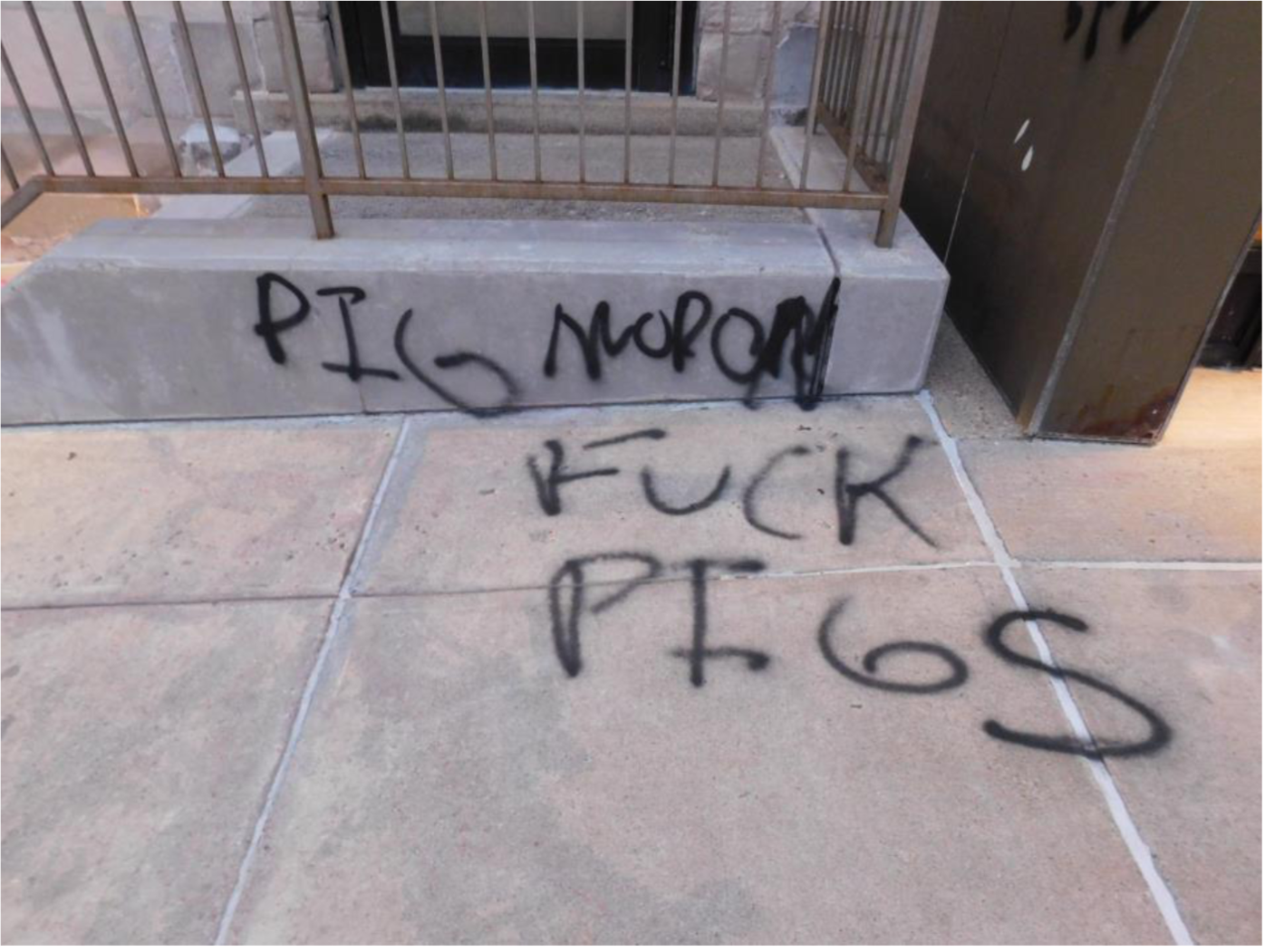 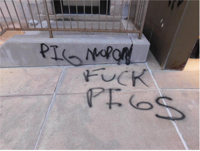 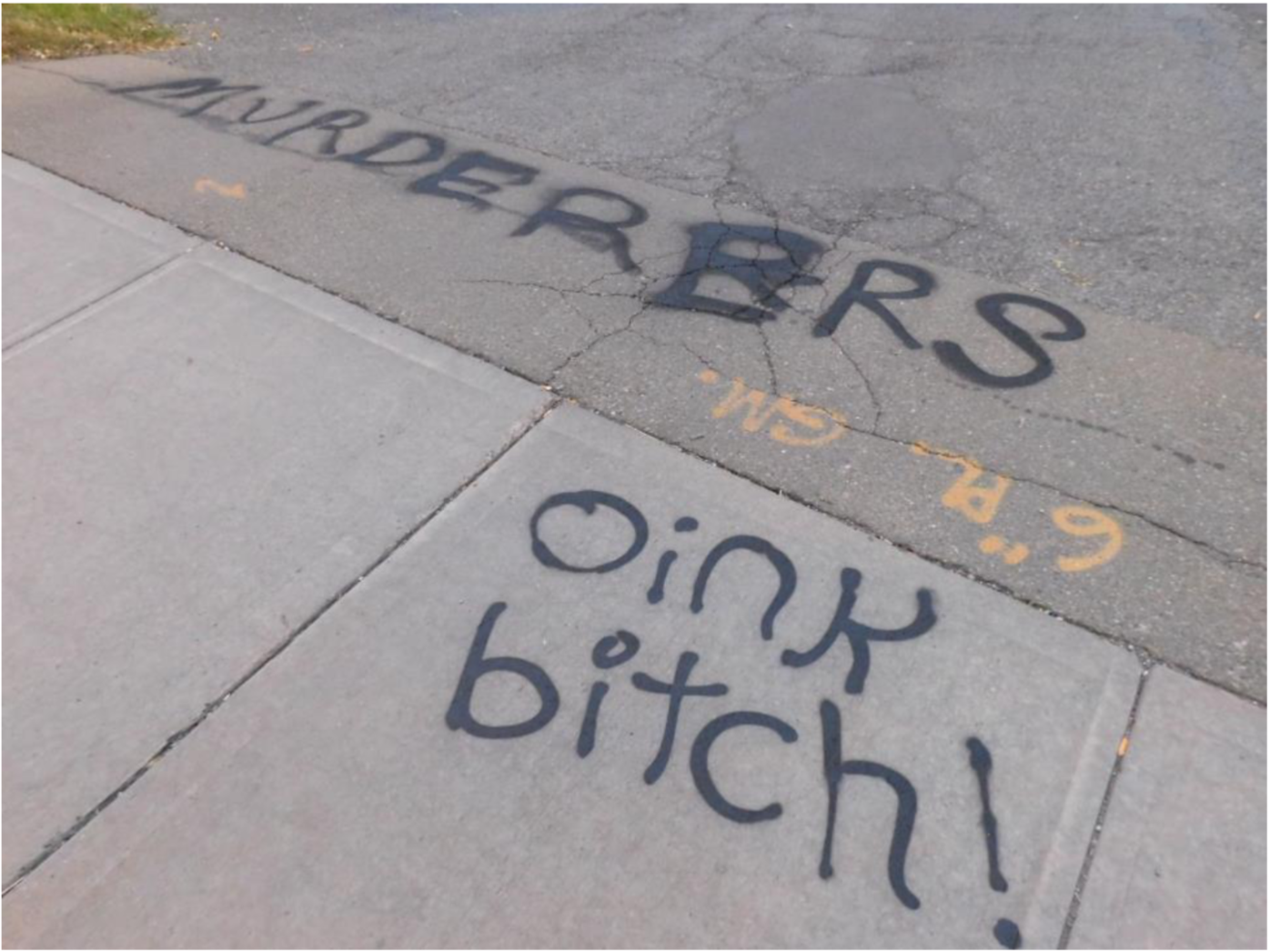 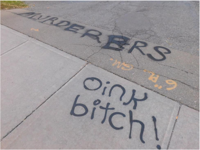 Ithaca police officers arrested two protesters on Sunday evening after activists were caught spray painting the IPD headquarters and surrounding areas following a 2 p.m. rally at the Bernie Milton Pavilion. These arrests were the first in over four months of weekly protests, though tensions have been growing over the past few weeks.

Officers first arrested a 15-year old protester and then arrested the second protestor moments later. Both have asked not to be identified. The first suspect was arrested and charged with making graffiti and resisting arrest; the second was charged with criminal mischief. Both protesters were detained inside Ithaca Police Department for nearly 45 minutes before being released. They are set to appear in court later this month.

Witnesses reported that police attempted to arrest a third protester who fled the scene from police on foot, and IPD did not pursue them.

Protestors were gathered outside the police headquarters for approximately an hour rehearsing marching formations before they began spray painting the sidewalk, walls and doors to the lobby with epithets such as “pigs kill kids,” “murderers,” “how do you sleep?” and “fuck 12,” a popularized anti-police slogan.

A statement from police said they observed multiple subjects, “not just the two who were arrested,” making the graffiti while the group obstructed traffic. Protesters say the second protester was only standing nearby when he was arrested. The Ithaca Voice reports that neither of the protesters was personally involved in the vandalism described by the police.

“This act of vandalism is reprehensible, and criminal acts of this nature will not be tolerated. For the past 18 weeks, the officers of the Ithaca Police Department have been thoroughly accommodating and highly professional during the scores of protests that have occurred, making this act even more deplorable,” said IPD Chief Dennis Nayor.

Second arrest was just made for “criminal mischief” pic.twitter.com/j4nNbfa2tx

Video footage of the second arrest shows police officers carrying the limp and screaming protester into the police department by his limbs. From the middle of the street, nearly 30 protesters can be seen clasped arm in arm as police struggle to separate individuals and protesters holler back.

About 15 police officers responded to the Sunday evening incident, not including State Troopers who also arrived at the scene and proceeded to monitor protesters even as they left the site and reconvened at the Bernie Milton Pavilion. Tensions between weekly protesters and counter-protesters and law enforcement appear to be at an all time high.

In the last three weeks alone, the City has seen the American flag outside the IPD headquarters burned by protesters and the Ithaca Black Lives Matter mural on Plain Street painted over by protesters associated with Back the Blue counter protests.

Following the release of the arrested, protesters made their way back to the Bernie Milton Pavilion on the Commons where they debriefed to a much larger crowd of nearly 70 individuals who showed up in support before dispersing.

“I don’t usually share my feelings,” said one protest organizer, “...but remember this fear, remember how this made you feel and know that this is how Black people live every day of their lives, never knowing if, if we even breathe in a police officer’s direction that might be it... Sandra Bland was murdered for smoking a cigarette.”