Ithaca Mayor Svante Myrick has officially asked the New York State Department of Health for permission to cancel three months of rent for Ithacans who are in "severe jeopardy of homelessness" as a result of the COVID-19 economic crisis, starting with the establishment of a dedicated city commission. Common Council had approved Myrick to ask the state for permission at their June meeting.

The state must now approve the executive order Myrick sent them in order for him to proceed. Myrick would also be declaring a local state of emergency, as a result of the coronavirus outbreak's economic ramifications on the city, local businesses and its residents. Ithaca would be the first city in the country to initiate a rent forgiveness program. There is no timetable for the state to respond.

See the full state of emergency declaration and the rent forgiveness executive order at the bottom of this page.

The exact language of the proposed executive order would establish the Rent Forgiveness Commission for the City of Ithaca, which would be made up of five Myrick-appointed people, including three renters from the City of Ithaca and two landlords from the City of Ithaca. That commission would then work to "institute systems and rules for the forgiveness of rent and the extension of leases for those tenants in the City of Ithaca otherwise in severe jeopardy of homelessness as a result of the COVID-19 pandemic." At the June meeting of Common Council, the proposed legislation would grant rent forgiveness for April, May and June for those people who have accumulated rent debt during those three months, though the final goal could shift from that.

The definition of "severe jeopardy of homelessness" will also be determined by the commission, and what language they eventually choose to include under the phrase will impact how expansive the legislation actually is, and how many renters in the City of Ithaca it would affect. Myrick said the commission would make the decision, but that preliminarily he would like to see it apply to "people who have lost their income, who aren't independently wealthy, and who are behind on rent for three months or more." The commission will also advise the city government on funding allocations that could reduce or eliminate the need for a rent forgiveness program.

While the fact that the bill has been officially sent is a landmark victory for the Ithaca Tenants Union, which has fervently pushed the bill and protested outside of Myrick's house and City Hall on Monday, they were unhappy with the inclusion of the "severe jeopardy of homelessness" phrase, saying it would exclude people. They had pushed for the bill to apply to all people affected by COVID-19, but Myrick said he felt that was too broad and far-reaching to include.

"This [executive order] leaves us both joyful and frustrated," said the Tenants Union in a statement to the Ithaca Times. "Its delivery to the State Health Department is an exciting development in Ithaca becoming the first US city to cancel rent, but it’s unacceptable to our Union that a 'severe jeopardy of homelessness' qualifier was added against the advice of the tenants this legislation affects."

The ITU said they felt the "severe jeopardy" language equated to means testing and thus left certain vulnerable populations out of the scope of the bill, and also allowed for too much administrative overhead.

"This EO is not an unequivocal mandate for stringent means testing in Ithaca’s rent cancellation, but its language does remind us that when working with establishment power structures, constant vigilance is key," the statement continued.

See the full emergency declaration and executive order on rent forgiveness below. 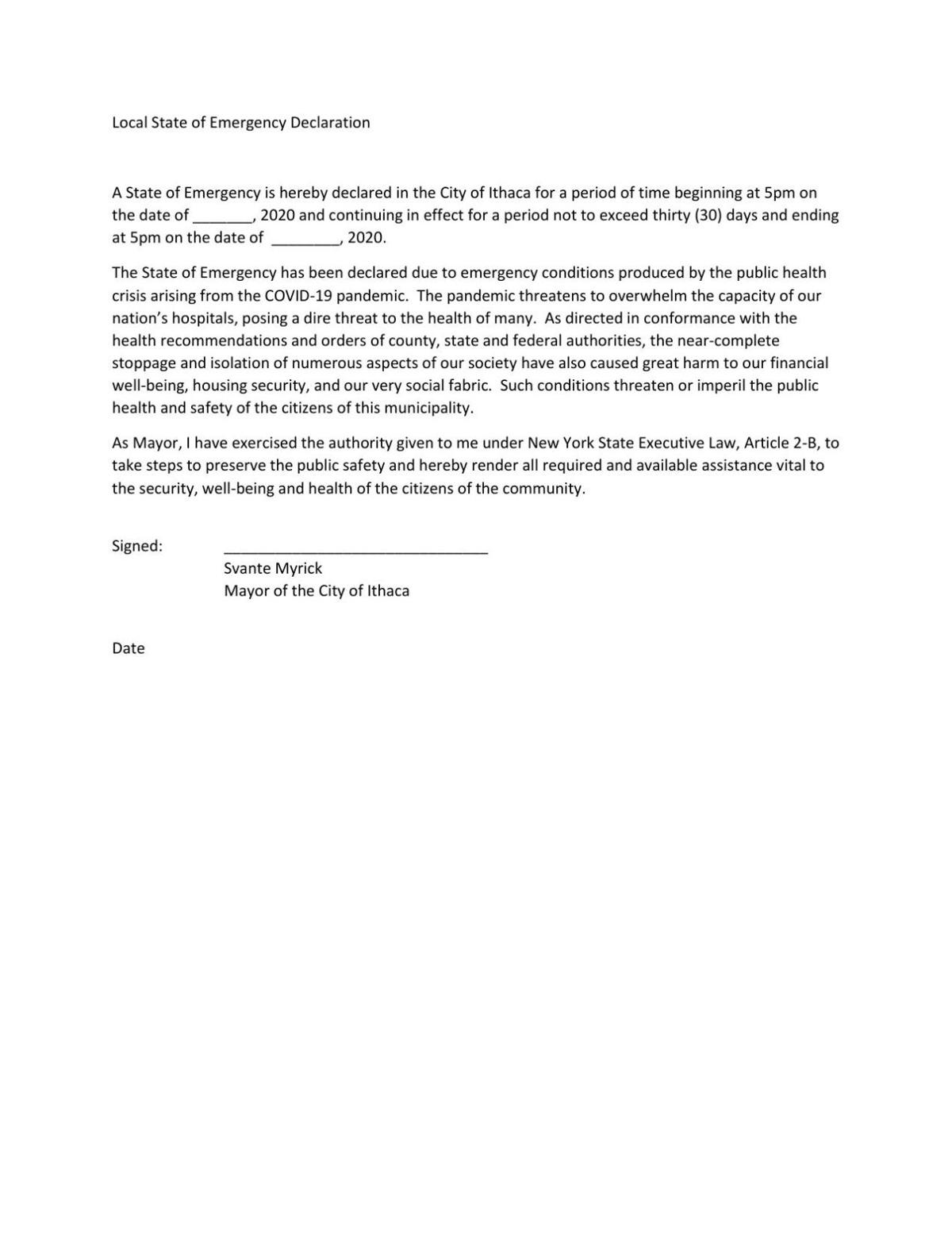 Rent forgiveness is great, but what about mortgage and bill forgiveness for the landlords? Some one is going to be paying. Forgiving 1 while increasing anothers cost just isnt right.

Its not even mortgage and bill forgiveness. Who pays the plumber? The hallway cleaner? The landscaper? The sales staff?

Perhaps Mayor Myrick should read the US Constitution, fifth and fourteenth amendments which bar takings by the government without just compensation. Taking the landlords' properties without paying for them may be a great holiday for the renters but it would be a form of "legalized theft" from them. Does the Mayor really expect the landlords to keep the lights on and the properties maintained if there is no rent being paid? Since when does government have the right to take some people's property and give it freely to other people? Does Ithaca expect new housing to be built here for rent if landlords are not allowed rent. Ithaca may be the first place to try this but that just shows how socialist Ithaca has become and it is highly probable that if the City does get permission from the State, a lawsuit that will cost the City and its taxpayers dearly will be filed. The City may even be required to pay the landlords all the rent they lost and of course the City taxpayers would have to pay for that.

Landlords require rent to maintain their buildings, pay their mortgages, taxes, etc. If rent is forgiven for tenants, the landlords must be reimbursed by either the City, County, State or Federal government. Landlords are businesses, some small, some larger, just like any other businesses, they are not banks.

If ithaca gets permission to cancel rent it still wont. Heres why. Whenever you try to be the "first" in doing something it establishes a precedence. There are no shortage of property owner millionares and billionares that have no interest in a City setting a legal precedent of screwing the Landlord because they fear it will be them next. So if the City attempts to do this, they will be facing State and National Landlord money from billionares to fight this Unconstitutional Taking by the State. This means the law gets put on hold while they fight it out in Court for 3-5 years at a cost of millions or Tens of Millions of dollars for a case the City will lose. It would literally be cheaper for the City to write a check to every Landlord paid in full to stop the eviction than it would be to fight it in Court and still lose 5 years from now.