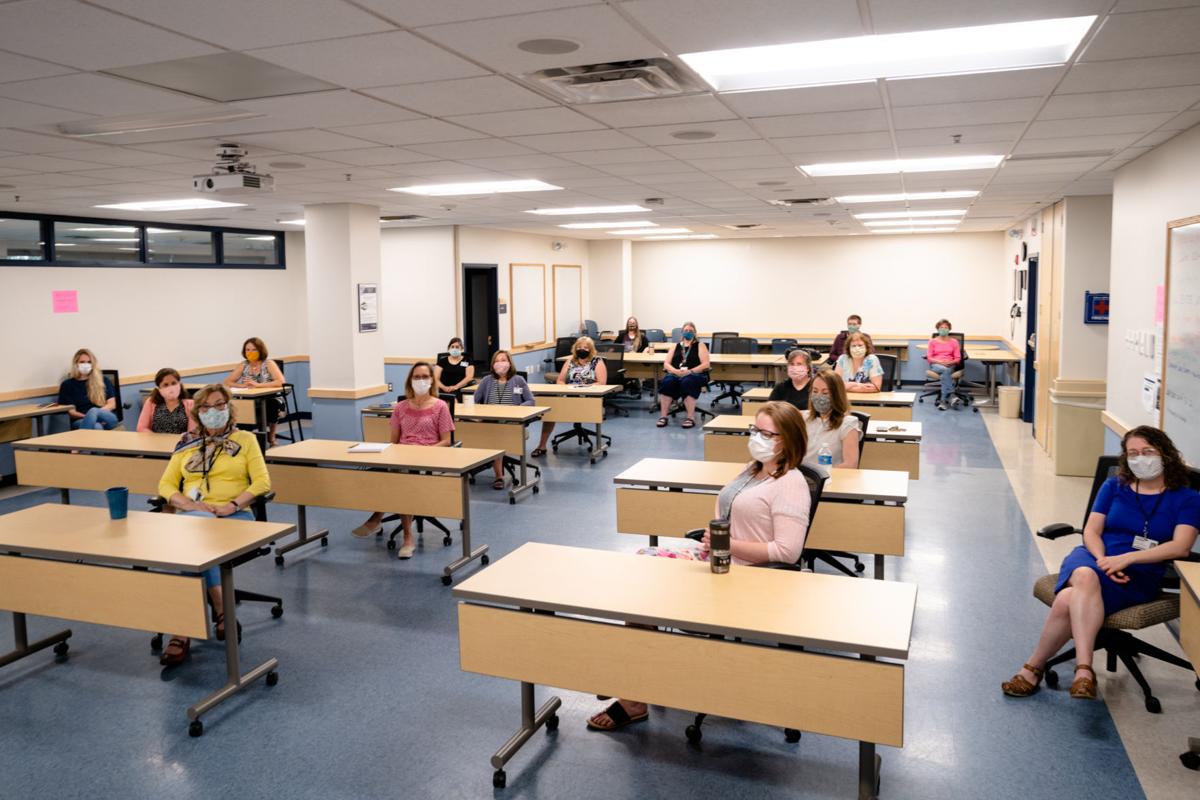 The daily morning briefing for the contact investigation team, held in the Rice Room of the Tompkins County Health Department. 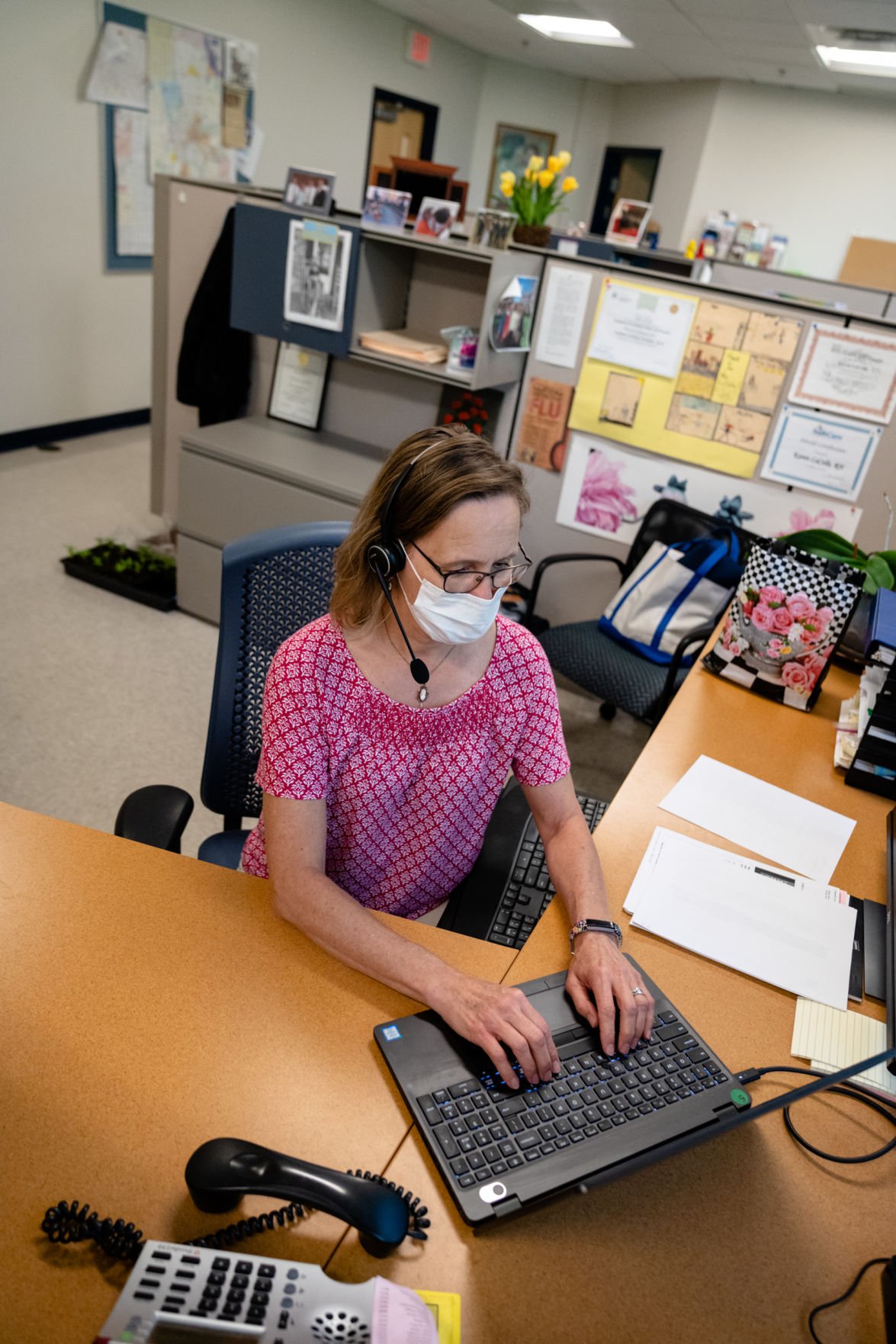 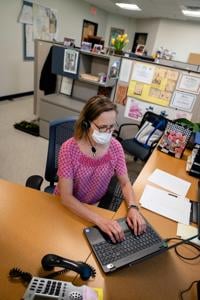 Coronavirus has introduced plenty of new phenomena to daily life, but while the general public might be unfamiliar with contact tracing, it’s actually a common practice for the health departments nationwide and was long before COVID-19 ever infiltrated America.

Contact investigations are used to track the path an infectious disease might have taken and who might have contracted it from someone with the illness. The responsibility normally falls on the health department, in this case, Tompkins County’s, to track when and where the virus would have been contracted and identify any web of subsequent infection that has followed, then notifying any others who might have been infected. It’s a way to chase down the disease and, potentially, stifle it with isolation and quarantine tactics before an outbreak gets too far.

Supervising Community Health Nurse Melissa Gatch manages the staff that is conducting the contact tracing, called the Communicable Diseases Team. That has ballooned from six nurses to 30 people over the last few weeks, in accordance with the number of tracers per 100,000 people mandated by the state to qualify for re-opening. Nine of those new members are also nurses, while others are workers from a variety of county departments who have now gone through training provided by Johns Hopkins University to orient them about what information they need to be conveying to patients and how to communicate necessary points to them.

Gatch explained that anyone who tests positive or negative is entered into a state database, and the positive cases are assigned to a member of the contact tracing team. From there, a case investigation is initiated, in which Gatch said the person who tested positive is interviewed about who the person’s normal contacts are, what their family make-up is, if they’re able to isolate in their home and, if so, if they have space and infrastructure to do so effectively, like their own bedroom and bathroom, etc. It’s a personal process and, frankly, a delicate one—better suited for their more veteran staff members.

“That just takes some finesse, and that’s where that training comes in,” Gatch said. “Anybody new coming on, we wouldn’t put them on a case investigation, because those are really key to getting a good, solid conversation about how they’re doing and educating them, but also eliciting those close contacts and defining those close contacts. Our more experienced nurses have been handling that all along.”

Rene Borgella is one of the newly-trained coronavirus contact investigators, though as a public health sanitarian, responsible for health and environment standards inspections, he was familiar with the tracing process primarily in lead poisoning and food borne illness cases. There are some parallels between the two, as the core process involves finding the point of origin where a condition was contracted, cross-checking it with other people who were there at the same time, etc.

To become an approved tracer, Borgella completed the six hour coronavirus training process, which he said contains tangible differences from his prior contact investigation training--and carries markedly higher stakes than investigating a typical case of food poisoning. He added that, likely due to those higher stakes and the threat posed to someone’s health by COVID-19, a prominent part of the training is how to relate to patients who are receiving the news, something that he noted might be the most important part of the job.

“It’s not like being a doctor, but it’s really about relationships, building trust with someone, being able to explain to them what’s going on and have them understand that what you’re asking them to do is, basically, isolation,” Borgella said. “That’s a very difficult thing, and that brings some challenges. You want to be able to talk to them and have them feel like their concerns and obstacles for them to be able to comply with these things, that you hear them and understand.”

Being able to emotionally connect with a patient is going to be key to get that person to responsibly follow the guidelines after a positive test, Borgella said. A negative reaction is understandable, particularly when the repercussions for some people, who might face job loss, looming bill payments, or any number of other challenges, are much more drastic than others. Patients with confirmed COVID-19 are even told to isolate from family members who live in the same house, for their relatives’ safety. It’s quite a lot for people to handle mentally, especially being told on the phone by a stranger.

“Someone’s calling you to tell you ‘Oh you were at the supermarket when so-and-so was there, and from what you’re telling me you can’t go to work for the next two weeks,’” Borgella said. “That’s a harsh piece of news.”

Borgella hasn’t had to conduct an actual COVID contact investigation yet and, frankly, he’d prefer not to have to. If he was called in, it would mean a rise in cases and a turn in the positive trends the county has seen over the last several weeks.

The new investigators will likely be handling more of the secondary, follow-up process, Gatch said. Daily calls, check-ups, continuing education about the importance of following the self-isolation rules and generally monitoring patients for symptoms or indicators of necessary further action.

“We had to really develop our own system for monitoring all this,” Gatch said. “We have always done this on a small scale, with tuberculosis, measles, mumps, other communicable diseases we do contact investigations. It’s part of what we do all the time, but this is really on a larger scale.”

There was an adjustment period early on, Gatch said, where the increased demand for contact investigations and some of the confusion around the illness meant that the health department had to put in extra time to “get on the same page” as a unit. It was a tall order, as Gatch said normally there would only be a need for a contact investigation a few times a year: maybe three or four for tuberculosis (which includes quarantine), perhaps a pertussis case (which does not), etc. With coronavirus, they’ve now been sent over 150 cases over the last 10 weeks, since the first Tompkins County resident tested positive on March 14.

“The quarantine and isolation is different in this disease,” Gatch said. “Other diseases didn’t have that level of quarantine.”

There’s no universal time commitment for each investigation, as each one depends on how many “close contacts” the person who tested positive has had. It adds another layer to the importance of staying indoors: the less contacts someone has had and people they’ve been in close interaction with, the less time that the health department has to dedicate to the contact interview and subsequent tracking and investigation.

“We could have one case in a day and it could take us the entire day,” Gatch said. “You could have another case that really has been home, has had no contact with anybody else and that’s a very short case interview. On any given day, the number doesn’t tell you how much time, it really depends on how complex and how far-reaching that case has been during the time that they’ve been infected.”

Nothing like building public policy out of a complete fraud. Anyone who has done even cursory research on Covid knows that not only is the threat from this seasonal virus overblown but the tests are sketchy at best. One might also want to consider the original reason given for lockdowns- remember it was so hospitals would not be overrun- and wonder why still the lockdowns when hospital bed occupancy has been at all-time record lows nationwide and health care workers are experiencing record numbers of layoffs- this during some supposed "global pandemic?" Another question to be asked is "Where have all the flu cases disappeared to?" I think I know- Covid is the new cash cow so flu doesn't exist any longer- let's see how this gets rolled out in the next "flu season." Shame on everyone who is pimping this fear- viruses don't kill people- weakened immune systems do- can we talk about that instead of this phony premise that some killer virus just landed from Venus and will wipe us all out if we don't wear masks and keep our distance from our fellow human beings.

The Covid PCR Tests are a Diagnostic Fraud. The ct-qPCR Test (unapproved for diagnostics) and its administrative procedures are not only flawed (problems with adequate swab) but are a non-specific, catch-all test which is known for giving false positives for flu-like viruses as well as many others.

These tests do not give adequate clues about the amount of viral infection (slight or severe) and whether or not the virus is alive since it examines elements of RNA debris, not the entire genetic sequence. Detection of a dead virus has no clinical meaning as they are present in any respiratory disease unrelated to the disease itself.

The PCR test "positive" does not necessarily imply disease even if the presence of the virus is confirmed by full sequencing, also the PCR’s RNA fragments do not definitively make a clinical case for COVID attribution.

PCR tests, put simply, are a diagnostic fraud, a fact indirectly admitted by the FDA.

On May 4th the FDA stated openly, "a concerning number of commercial serology tests are being promoted inappropriately, including for diagnostic use, or are performing poorly based on an independent evaluation" conducted by the National Institutes of Health.

The results from these flawed tests, tests that had been rushed to market, were not only repeated as gospel by media throughout the country but were and are being used as (mis)information to guide public policy.

Such recklessly vague, catch-all clinical descriptions of COVID covers a broad spectrum of existing diseases or conditions. This can be directly responsible for injurious or deadly therapies, including invasive ventilation known to kill up to 80% of COVID patients in some areas, as well as blatantly wrong protocols and drug regimes doctors are still compelled to follow.

C19 is decidedly not some alien, unique virus- it is a SC2 virus (that was fully sequenced) out of at least a hundred others present within our respiratory system. Nobody cares to pay attention to these others as the immune system in a healthy person deals with them, just as a healthy immune system does with SC2, influenza and other viral contagions.

What we are dealing with is not the result of some unique deadly virus rather it is the result of the collapsed health of populations due to extreme social stresses, rapidly deteriorating environmental conditions and the devastation of public health institutions worldwide which has produced hundreds of millions of people sick and dying from preventable diseases every year.