Cornell University and Tompkins County have responded to Assemblywoman Barbara Lifton's list of 20 questions, many of which she said were consistently asked of her by constituents, regarding the school's Fall semester reactivation plans, which she sent on Monday in addition to a request to the state Department of Health that the questions be addressed or at least considered prior to approving the plans.

Lifton sounds encouraged by the answers, which were submitted by Cornell University President Martha Pollack, Tompkins County Legislature Chair Leslyn McBean-Clairborne and Tompkins County Health Director Frank Kruppa. The entire list of questions and responses in full can be found at the bottom of this page.

"I have spoken directly with Cornell about their testing regimen, which has been one of my greatest concerns, and I am encouraged at what certainly seems, to this non-expert, to be a rigorous and accurate testing protocol with a turnaround time of 24 hours or less, which will allow for effective contact tracing," Lifton wrote. "The Student Behavioral Compact seems very strong to me and Cornell and local governments say they are committed to rigorous enforcement and consequences, including possible expulsion, for violators."

Lifton had started her queries by questioning how Cornell had come to the conclusion that so many Cornell students would be returning to Ithaca regardless of the school's intentions to hold classes in-person or all online. Cornell cited their previously announced student survey as the basis for that belief, as they have before.

"A survey of students received 10,000 responses which revealed that if all fall courses were taught remotely, 31 percent of undergraduates indicated that they would be 'very likely' and 22 percent would be 'somewhat likely' to return to Ithaca for the semester," the response said. "Graduate students also reported their intention to return to campus with 75% reporting that they would be 'somewhat' or 'very likely' to return to campus whether residential instruction is offered or if all classes are taught remotely."

Cornell said a follow-up survey conducted on July 16 confirmed their beliefs that student opinion had not significantly changed (although it should be noted that is after Cornell had already released its reactivation plans). They also noted that all classes will be available online for students who wish to participate like that, although obviously that would be tough for things like lab classes, etc. The school also revealed that of the over 10,000 respondents, 32 percent of undergraduates said they'd be "very likely" to enroll if all classes were taught remotely, while 23 percent said they were "somewhat likely."

A looming question on local residents' minds is what the impact of Cornell's student body returning will be on the infection rate of the community as a whole. Cornell said Dr. Peter Frazier, who formulated the first model that informed Cornell's reactivation plans (and projects that 1,200 members of the Cornell community will test positive for the virus at some point, with 10-15 resulting hospitalizations), is working on a second model to project how intense the non-Cornell spread would be if students return.

"Dr. Frazier hypothesizes that, based on the numbers in our current model, the number of cases in Cornell faculty, staff and students resulting in infections of individuals not associated with Cornell will be quite small," the school said, adding that his second model will be released upon completion.

Lifton also asked about the potential caseload's impact on the local medical facilities and whether or not Cayuga Medical Center is prepared for that. Dr. Martin Stallone, CEO and President of Cayuga Health Systems, has previously assured the community that he is working with Cornell and between CMC and hospitals in the surrounding area, he's confident in the ability to handle a boost in cases.

"Cornell, Cayuga Medical Center, and the Tompkins County Health Department have been in regular contact about the potential impact of Cornell’s reopening on the ability of our local health delivery systems to provide medical care to our community," the school said. "In particular, Cayuga Medical Center has shared its plan to manage a possible surge in COVID-19 cases. Our partners are confident that community medical needs can be met and have endorsed our plan."

Cornell also said it is contracting with hotels within an hour of Ithaca to have 1,200 rooms available at different times during the fall semester so students can quarantine and self-isolate if necessary, outside of space on campus already being reserved for such purposes. The school danced around specifics while answering the question of enforcing quarantine or self-isolation of students who test positive.

For the rest of the questions and answers, please see the document below. 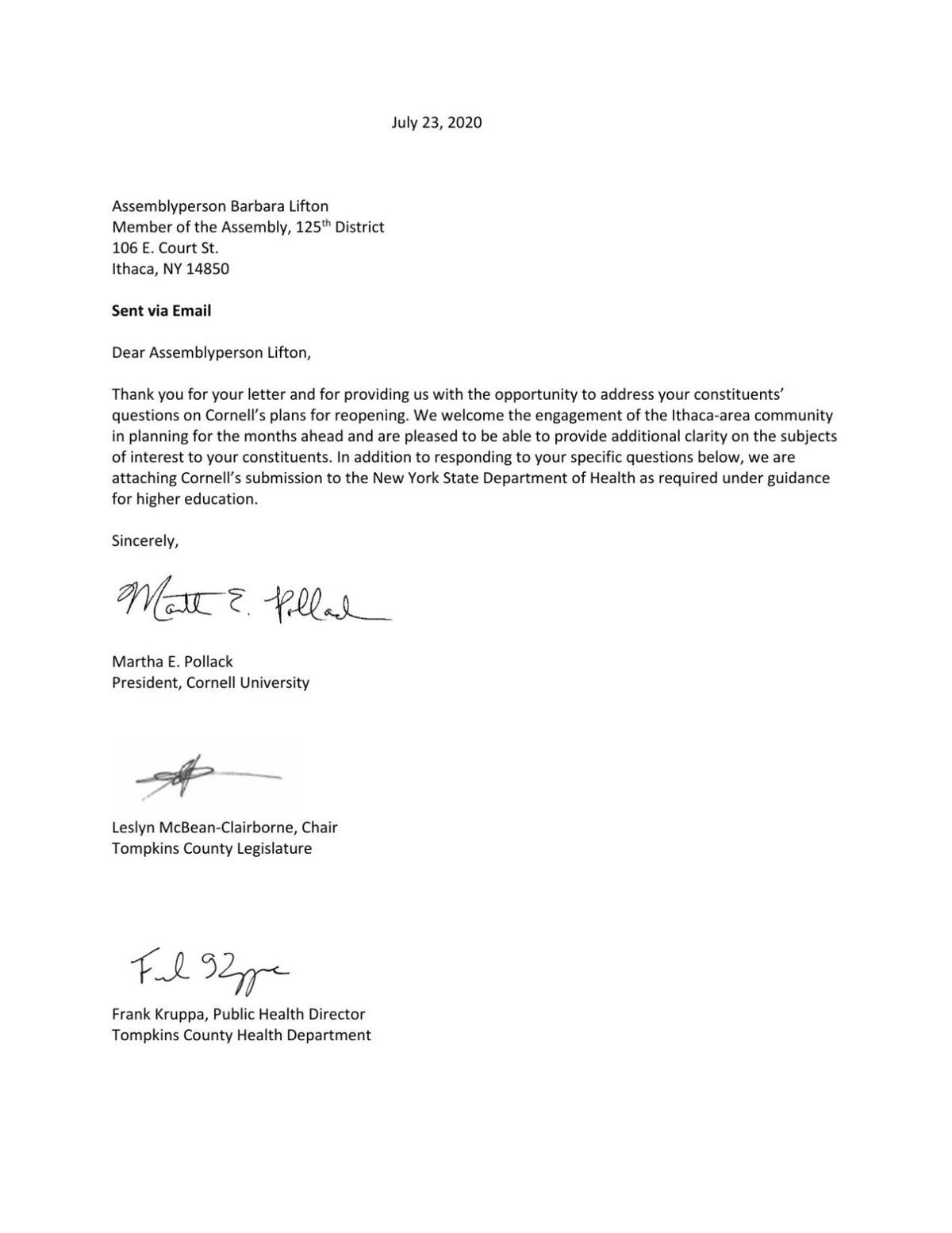