The view of Ithaca from City Centre 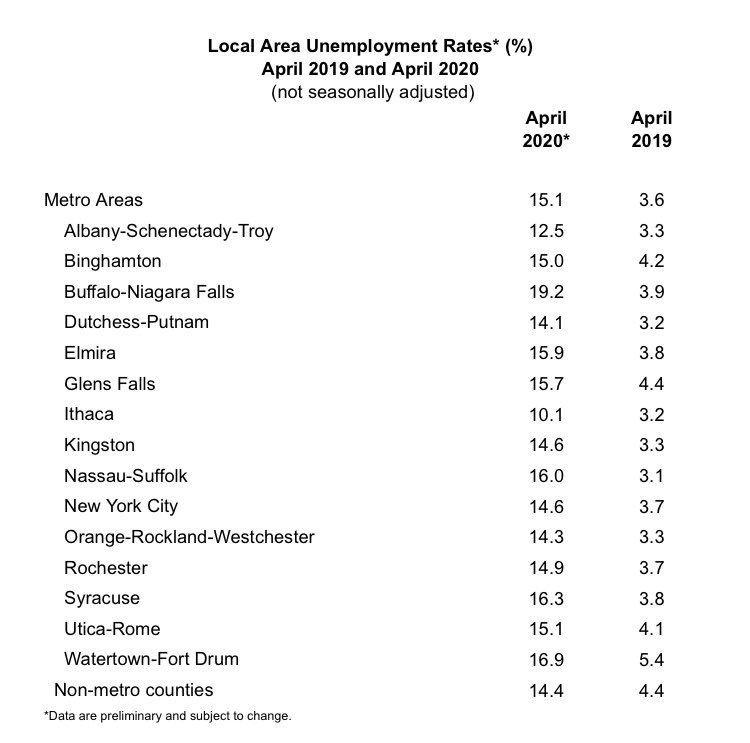 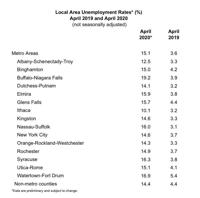 The Ithaca metropolitan area's unemployment rate has tripled in April 2020 year to year compared to April 2019, according to numbers released from the New York State Department of Labor.

The bright side, if there is one to be had, is that Ithaca's unemployment still ranks as one of the better figures statewide. The unemployment locally is the lowest in the state, as the average of metro areas in New York is 15.1 percent, up from 3.6 percent at the same point in 2019.

New York State's unemployment rate in April was 14.5 percent in April, a 10.4 percent increase from March.

Showing the vast and intense effects of the COVID-19 outbreak, Ithaca's 9.1 percent increase also represents the lowest in the state. The worst increase was Buffalo-Niagara Falls, which suffered a 15.3 percent increase, putting it at nearly 20 percent of all workers unemployed.

The April figures obviously do not take into account the gradual re-opening of the state, which began in the Southern Tier region, including Ithaca and Tompkins County, on May 15. It remains to be seen if the region will be approved to move into Phase II of the reopening schedule, potentially as soon as the end of this week. If and how that change impacts unemployment may serve as a harbinger for the economic recovery of the area. New York began it's shutdown, known as New York On Pause, on March 20 by executive order from New York Governor Andrew Cuomo.

A press release on May 21 from the Department of Labor further illustrated the weight of the outbreak's burden on the job market. Ithaca lost 9,500 non-farming jobs (private sector and government) in April 2020 compared to April 2019, representing a 14.4 percent decrease. That included 9,200 just in the private sector. Overall, the state lost 1.895 million non-farming jobs, good for a 19.4 percent drop year-over-year.

This comment is false and needs to be corrected: "Showing the vast and intense effects of the COVID-19 outbreak..."

The current and coming wreckage is being caused by POLICIES directly decided upon by government and health officials based on their outrageous and destructive decisions in relation to a seasonal virus not by some invisible virus itself. Human beings who hold office are the ones responsible for destroying people's lives and they need to be held accountable. Simply stating it was caused by "Covid" gives cover to those who made these decisions and abstracts away the fundamental reasons for the coming economic downturns that will and are causing all manner of social disintegration.