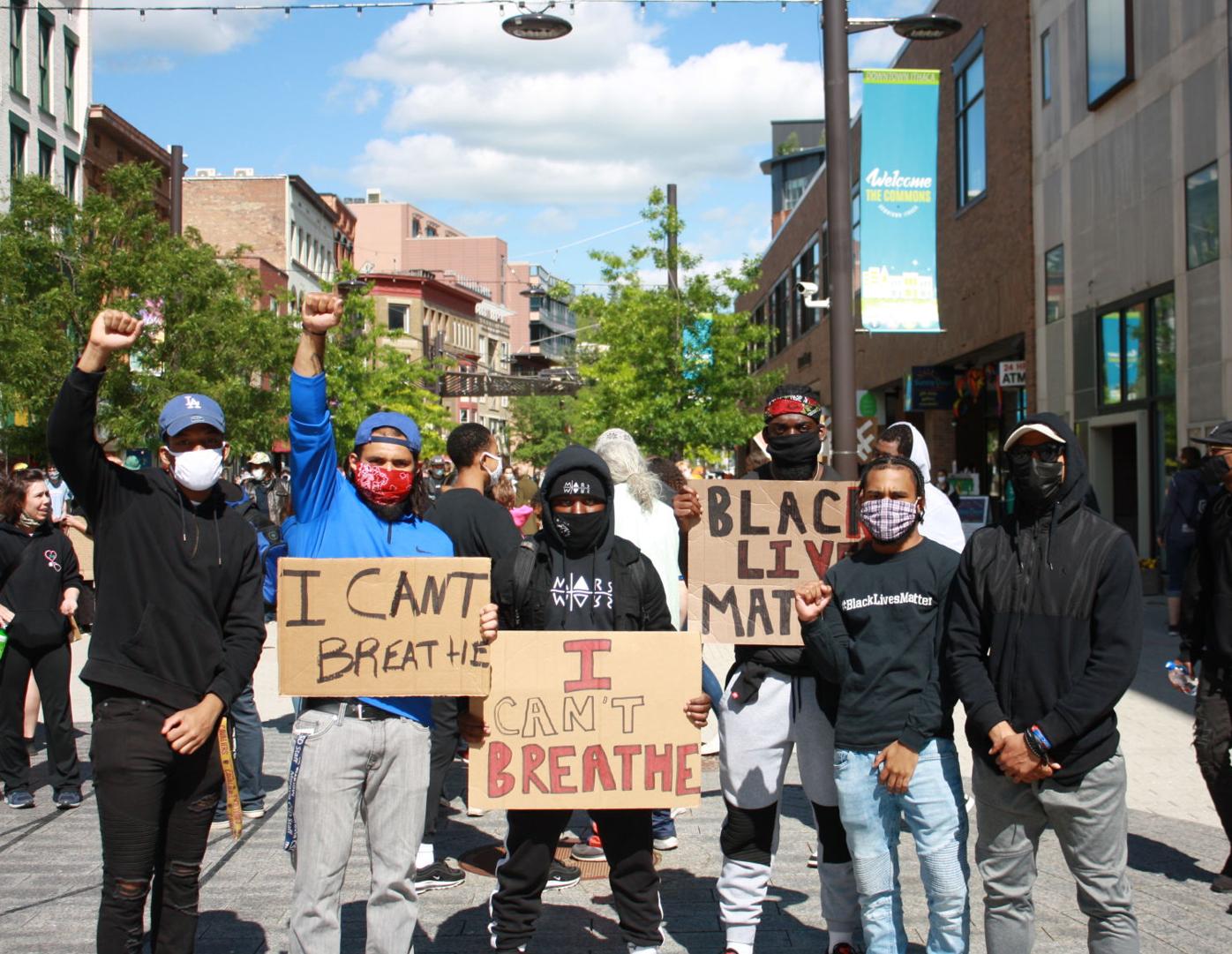 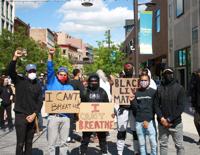 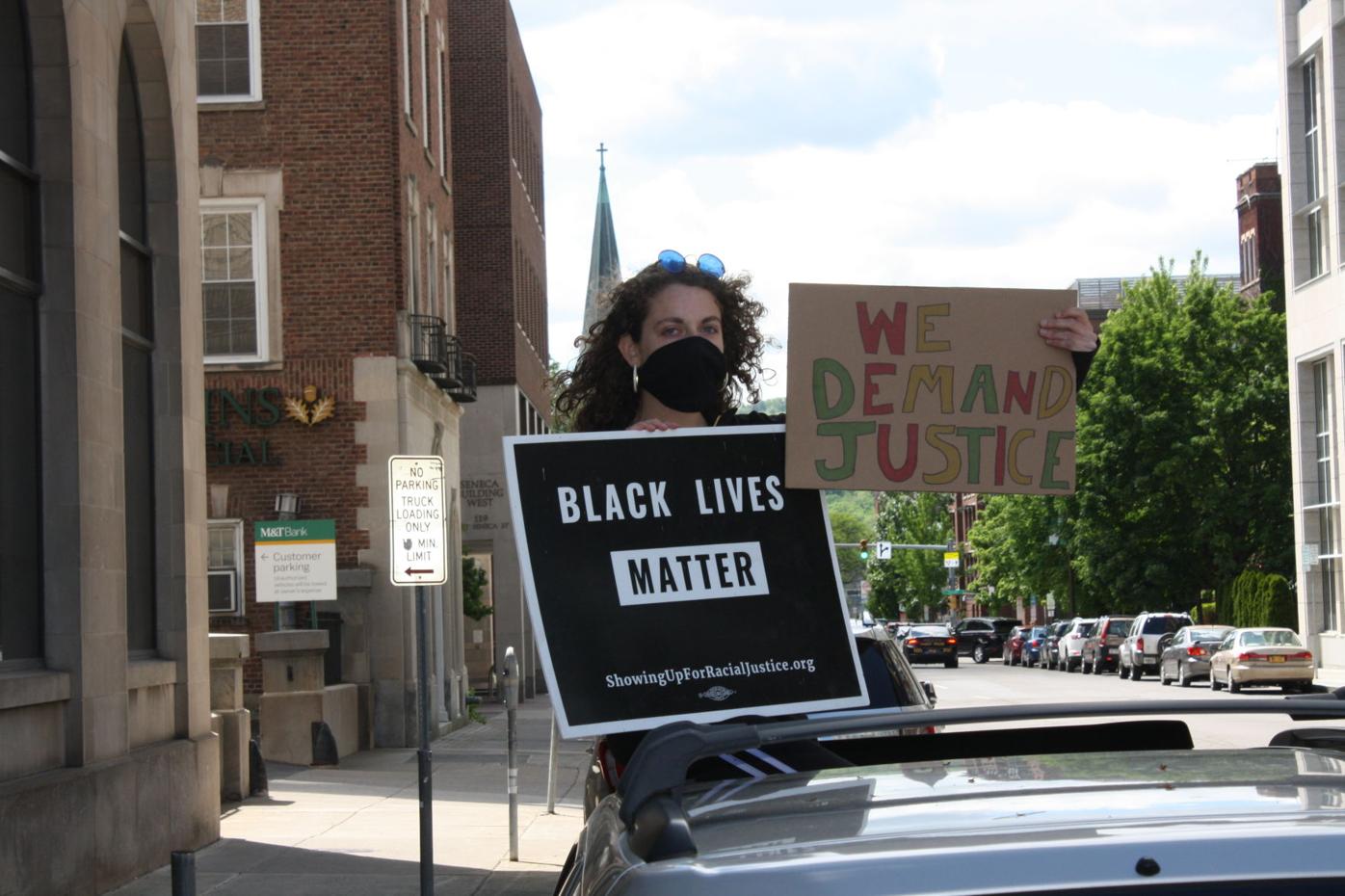 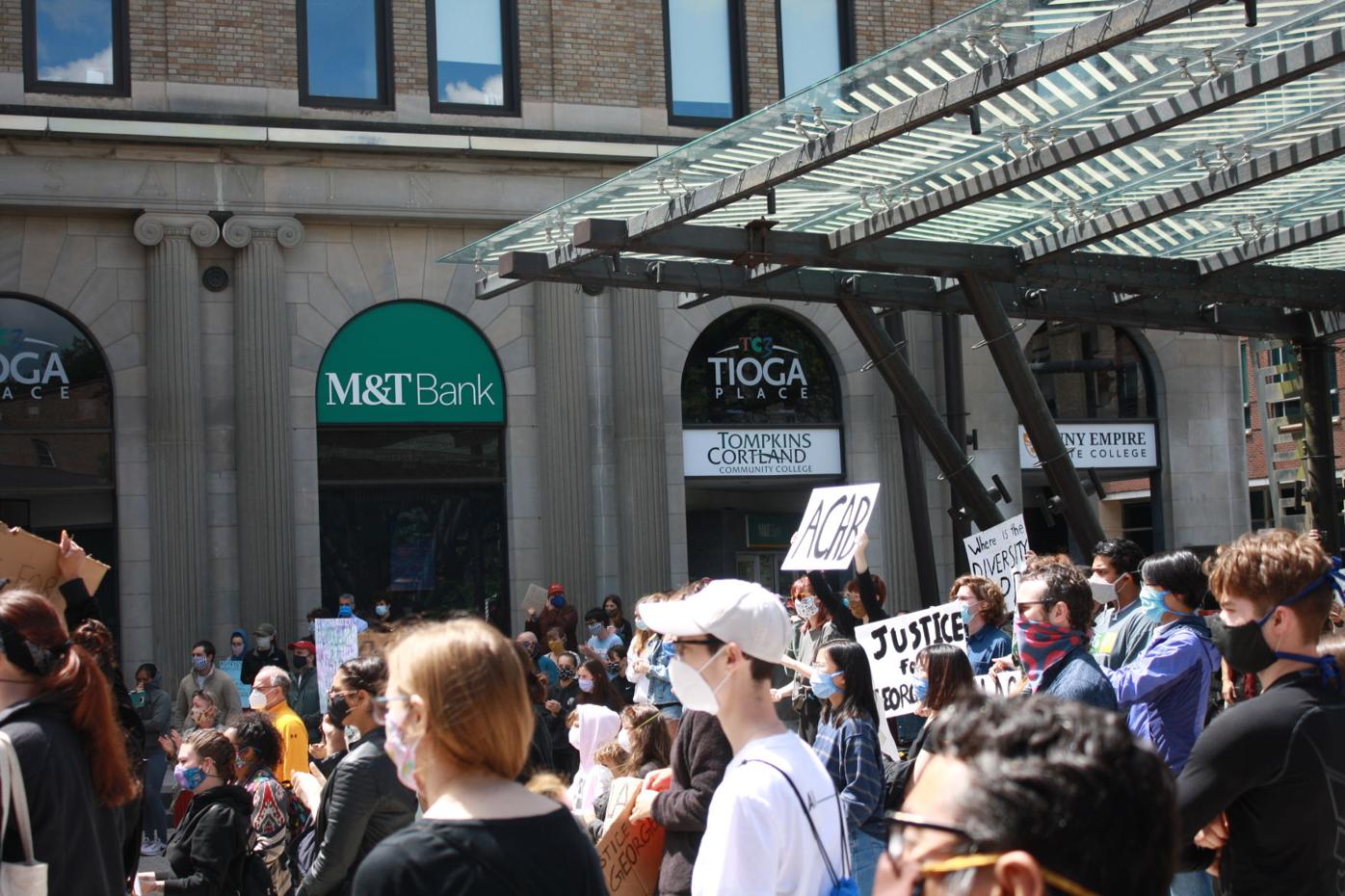 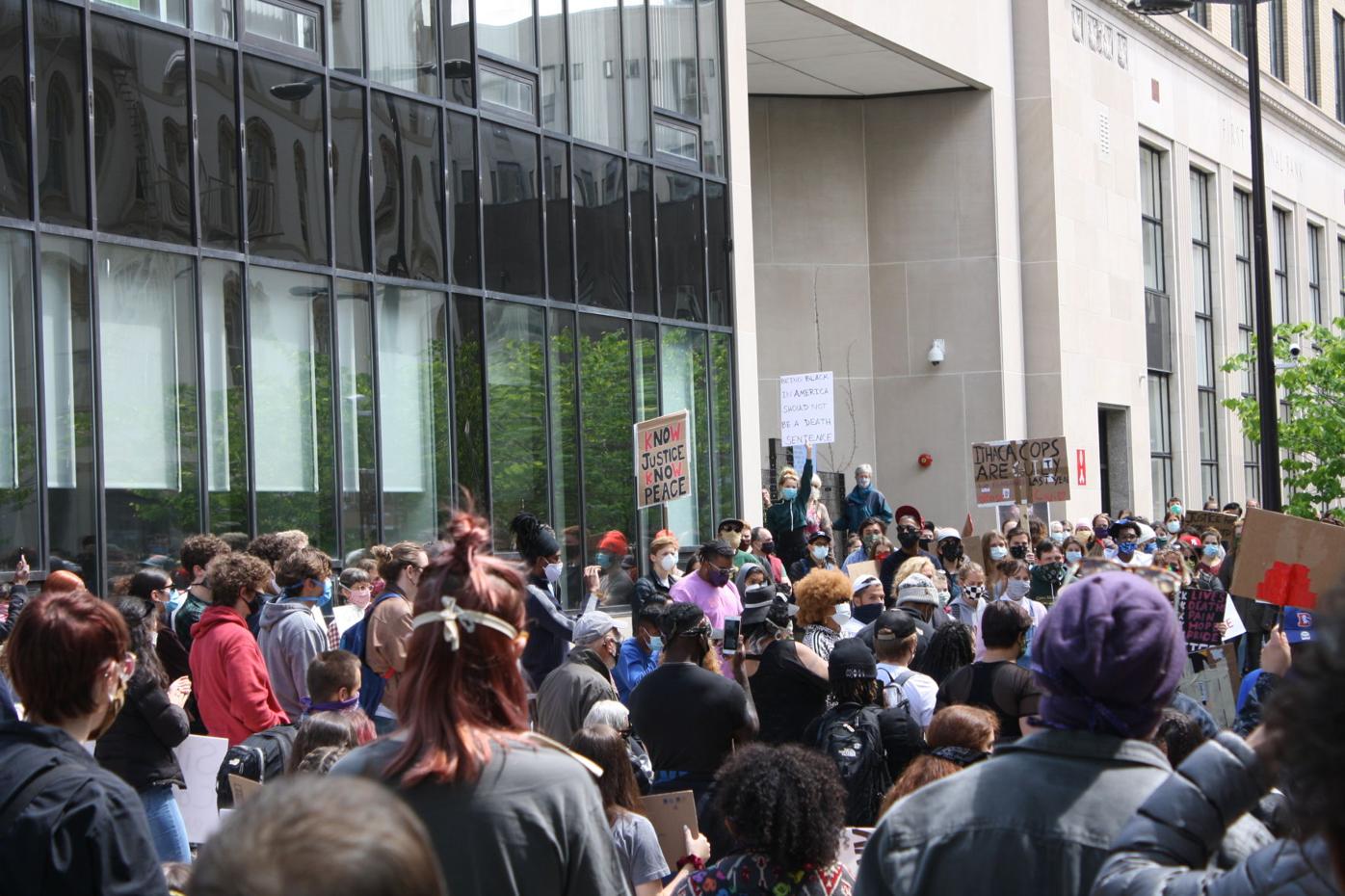 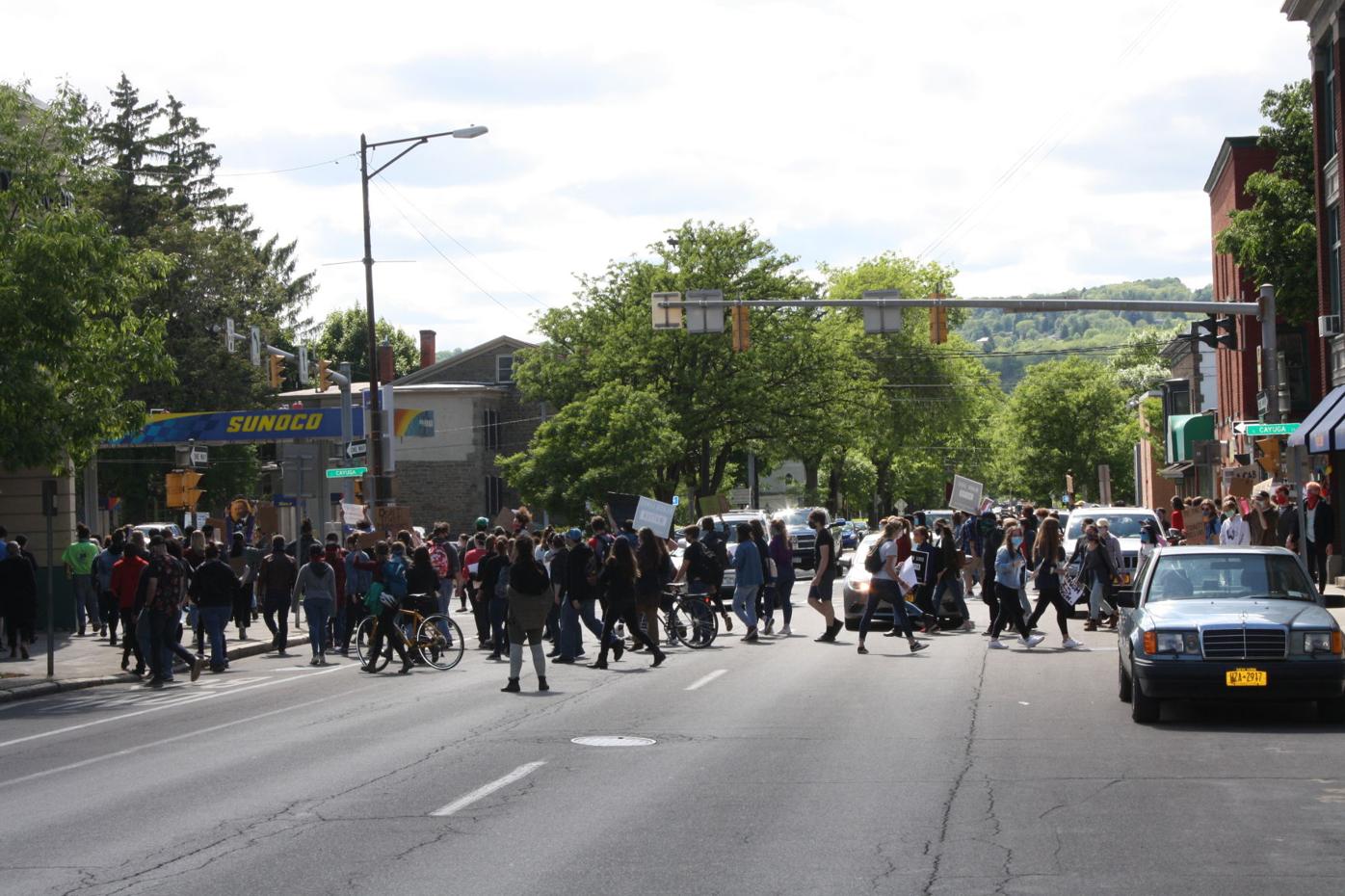 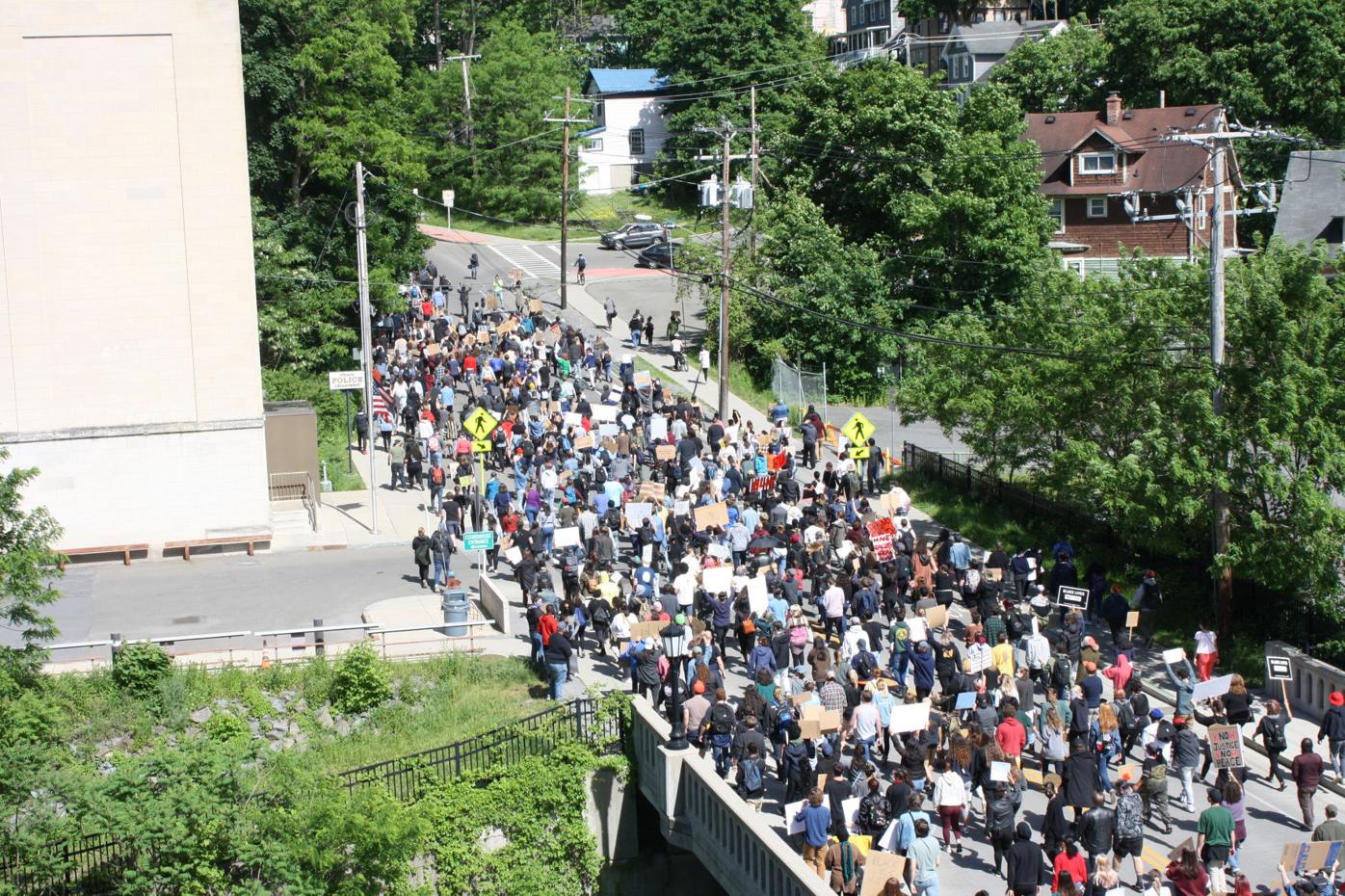 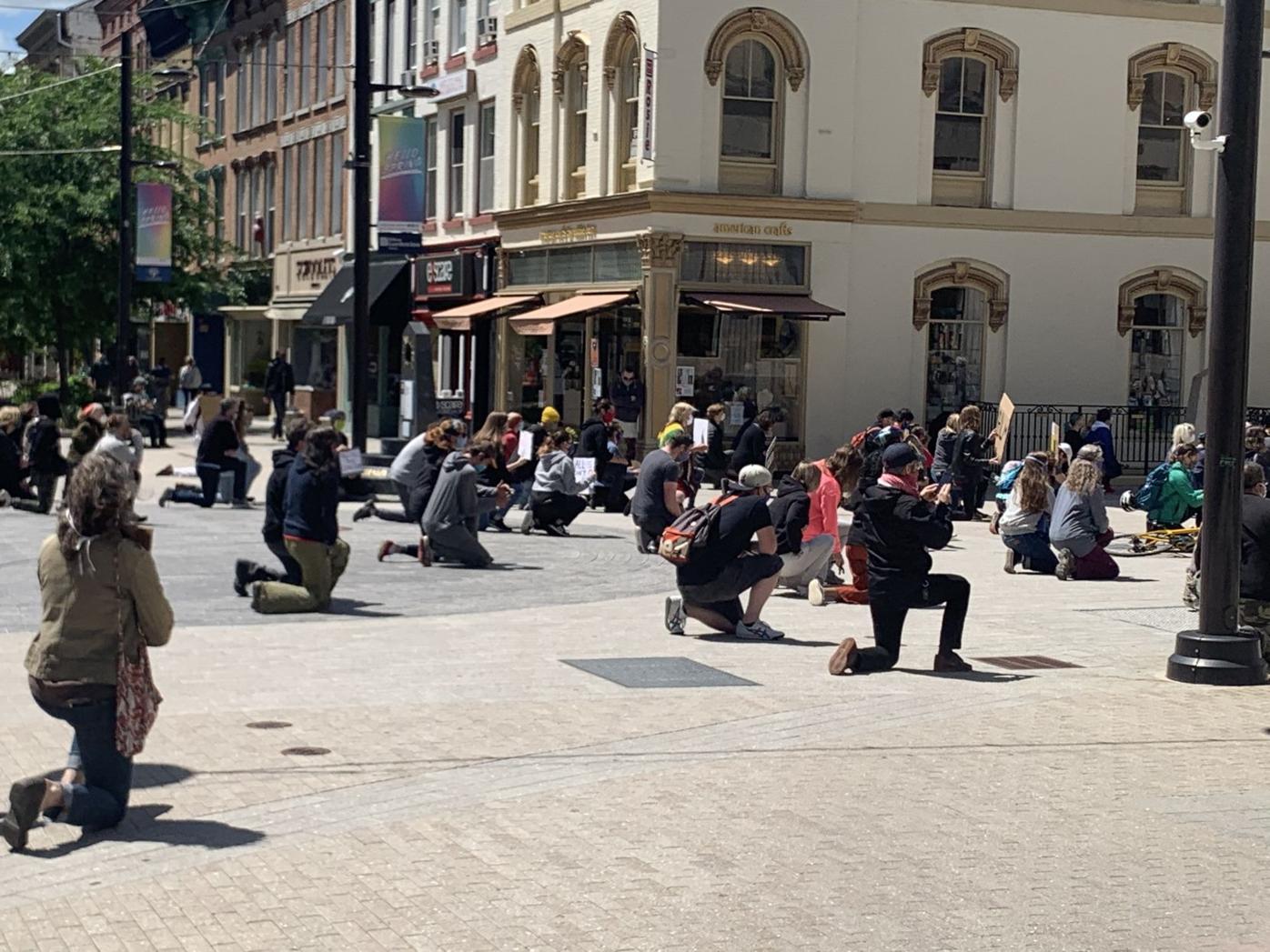 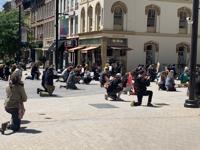 Protests and riots have broken out in dozens of American cities after the murder of George Floyd by Minneapolis police officer Derek Chauvin, which closely followed the release of the video of Ahmaud Arbery's killing (not by police, but lending to general racial animus) and the murder of Breonna Taylor in her house by Louisville police. The Ithaca protest saw none of the violence or rioting that accompanied some other demonstrations across the country, and featured a string of speakers before an organized march past City Hall and the Ithaca Police Department headquarters.

The crowd grew steadily from the event's 2 p.m. start, swelling to at least several hundred and possibly as many as 1,000 people by the time speeches ended and the crowd took to marching. The march briefly stopped traffic as the crowd crossed Green Street but only for a moment or two. The group chanted "No justice, no peace," "Black Lives Matter" and chants of George Floyd and Breonna Taylor's names.

Speakers primarily focused on demanding more accountability and respect from police officers and, more generally, an overhaul of police culture in general and the impunity that it allows police officers when they hurt or kill people, especially minorities and even more specifically black people.

Many speeches also called on the white community, locally and in general, to step up and help black people in the effort to stop police brutality. That's a common refrain, and one that more than a few of the speakers noted: that whatever level of frustration or pain the white community experiences when these things happen pales in comparison to what the black community feels then.

"Be my accomplice, don't be my ally," one speaker, Travis Brooks, said. "Understand what's really going on."

Frustration also shone through in many of the speeches. One speaker, a 16 year old girl, spoke through tears about the daily fear she experiences as a black person. The fieriest address was delivered by Aundre Seals, who later led the march around downtown. He began by pointing out the black experience in America has basically moved from slavery to chattel to segregation to mass incarceration.

Phoebe Brown also led the group in kneeling several times during moments of silence for prior victims of police violence.

Those addressing the crowd also challenged politicians, policy makers and local media, arguing all had been complicit in allowing racism to foment in communities both here and elsewhere. Several speaking additionally mentioned the most prominent incident of local police brutality, last year's Commons incident that eventually ended with dropped charges for Rose DeGroat and a not guilty verdict for Cadji Ferguson after both were slammed to the ground by police after an altercation with another group of people.

Notably, the action was held without the endorsement or involvement of Standing Up for Racial Justice or Black Lives Matter-Ithaca, the latter of which put out a statement clarifying that they were not involved. Both of the groups have been leaders of similar protests when they popped up over the last several years.

You guys fail to see the real problem here. It was organized by white people, they asked the POLICE for permission and had staff walking around with them, how is it a protest if the cops are helping us block off the streets who’s seeing this all the people see are cops blocking off the roads, most people were white few black people it was a joke not a protest!!!

I wasn't there because i am an old lady with lung problems. But i would have been if I could have. Not to make myself feel better. No. But to let you know that there are white people willing to do what it takes to get rid of racial injustice, and to educate ourselves through your leadership to what must be done and what has been done. Let us join you. Please.

It's kind of disappointing to me to see the criticism lobbed at this demonstration, vigil - whatever you want to call it - because there were a majority of white people there, because it was probably (but no confirmation or sourced information) lead by white people, because it was police permitted (the gall to get it legally set up ). I, as a white person who wants to be an ally, would love to follow the lead of POC in this community. All I do know is that every single speaker at this demonstration was a person of color. They spoke from first hand experience. They lead the demonstration. They expressed the pain and anger and outrage that is unfortunately all too justified. People need to take back public space and in this case, this is what we got. If you are a person of color and you disagree with what is going on in terms of protest and dissent, take the lead - or find others to take the lead. No one is stopping BLM in Ithaca as far as I can tell and I do hope that they can be more visible. But who's to say that BLM wasn't involved with last Sunday's and Monday's protests? You don't know. I for one am glad to have shown solidarity at the very least. Silence=death was the slogan for HIV/AIDS activists back in the day. The same goes for now. Let people of color take the lead. And no one, no matter what color of skin, should be silent.