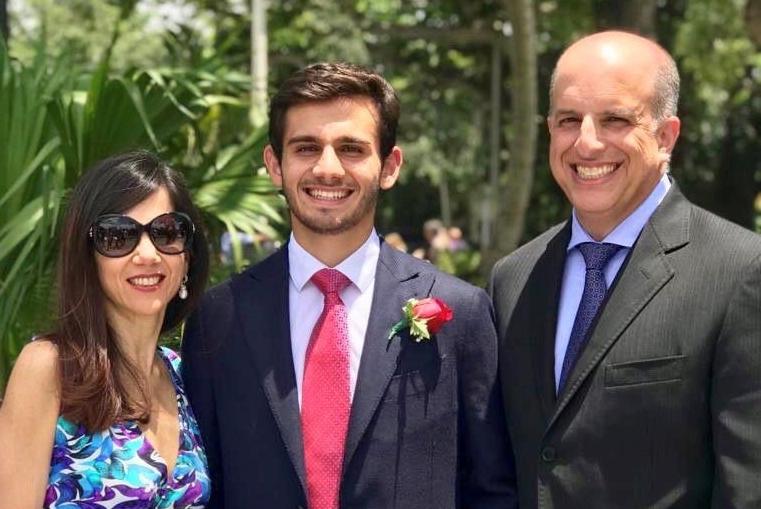 A photo of the Tsialas family. 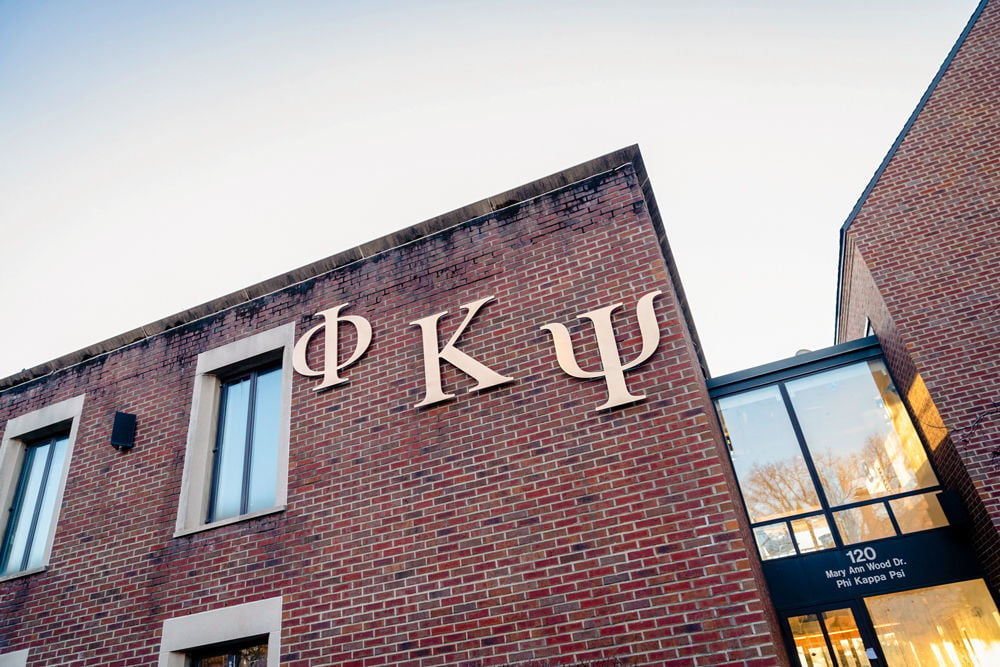 The family of Antonio Tsialas, a former freshman at Cornell University who died on the night of Oct. 24, has officially filed a lawsuit against the school and Phi Kappa Psi, the fraternity whose party he reportedly attended the night of his death, as well as the fraternity's New York Alpha chapter.

Eight people are additionally named as defendants in the suit, seven of whom are students in the Phi Kappa Psi chapter leadership, and one of whom is the chapter's advisor. The suit charges each of them with negligence for allowing Tsialas to leave after drinking at a party the fraternity held and not making accommodations to get him back to his dormitory safely, as well as violating New York State's hazing statute. It further alleges negligence and premises liability (because the Phi Kappa Psi house is owned by Cornell and was used in "hazing activities") against Cornell, as well as direct negligence against Phi Kappa Psi and the New York Alpha of Phi Kappa Psi Association.

The full lawsuit can be read at the bottom of this page by clicking on the document. It's not clear how much money is being sought in damages.

The suit goes on to blame Cornell for inadequate reaction to prior fraternity-related or hazing deaths, and names that as a contributing factor in Tsialas' death. It also takes aim at Phi Kappa Psi for not ensuring the safety of party attendees, particularly those who were drinking underage and then permitted to leave without supervision. A request for comment from the fraternity and several of the people listed as defendants has not been answered.

"The negligence of these defendants was a substantial factor in causing all of the injuries, damages, harms, losses and wrongful death suffered by the Plaintiffs [the Tsialas family] and their son," the suit states in each of the negligence charges against the fraternity members and advisor.

The cause of death is not listed in the suit, although the family's attorney David Bianchi confirmed that it has been determined to be blunt force trauma, meaning Tsialas did not drown in the gorge or die from alcohol over-consumption. Bianchi said the medical examiner found that Tsialas did have acute alcohol intoxication, or alcohol poisoning, prior to his death.

"He died from multiple blunt force trauma to his body," Bianchi said in an interview. "How he sustained that, we don't know."

Tsialas, 18 years old at the time, was found deceased in the water near Ithaca Falls on Oct. 26. He had been missing since the night of Oct. 24, when he left a party at a Phi Kappa Psi fraternity house on Mary Ann Wood Drive. The party was apparently a "dirty rush" event, according to the lawsuit but also Cornell University President Martha Pollack, who has promised Greek life reforms in the wake of the incident.

The suit lays out a narrative of Tsialas' final night, starting with dinner with his mother on Oct. 24, who was in town for Parents Weekend. He left to attend the party at Phi Kappa Psi, the annual "Christmas in October" event to gauge prospective new members, at which they were told by fraternity leaders upon arrival to keep quiet about the event if they were ever asked about it.

The themed party consisted of six rooms with various levels of extreme drinking rules for freshman attendees that certainly seem to meet the modern definition of hazing: beer pong, beer chugging, submerging students' heads underwater in a trashcan, mixing milk and rum together and making the students compete to chug the mixture, a makeshift Santa Claus ordering the attendees to drink different types of alcohol depending on whether they had been "naughty or nice." Students were divided into groups of six for these events, and were given a bottle of New Amsterdam vodka to finish after the final room.

"By the time the freshmen completed the drinking games in the seven different rooms they were intoxicated and many were 'black out drunk,'" the suit states. "Many were vomiting and lost all memory of what they did next or how they eventually got back to their rooms."

It is mentioned that sorority members were present at the event and helping to facilitate the drinking, though not much else is mentioned about them, including which sorority it was. They are not listed as defendants.

The aforementioned directive from fraternity leaders at the start of the night to not talk about the event has only partially stuck; details of the party are known, but there's little narrative about what happened to Tsialas after he left the party but before he wound up being found in the gorge on Oct. 26. Compounding that is that Phi Kappa Psi chapter president Andrew Scherr, a defendant in the suit, allegedly sent a text message to one of Tsialas' friends after hearing about his disappearance, telling him to not tell anyone that Tsialas had been at the house the previous night. The friend subsequently reported the text to Cornell police, the suit states.

"Not a single defendant in this case has come forward to tell Antonio's parents about the circumstances of their son's departure from the fraternity house that night and none have provided any information about where he went afterwards," the lawsuit states. "Their refusal to share information about what they know has only made the pain and suffering [the Tsialas family] are experiencing by the loss of their son that much worse."

The lawsuit details the condition of Tsialas' body when it was found: that he was fully clothed in the same clothes he had worn to dinner with his mother, except his polo shirt was found in a bush up the gorge. It had vomit on it and "the imprint of a shoe or sneaker." Tsialas was found with his wallet and keys but not his cellphone, which according to the suit has not been recovered. Tsialas' time of death has not been determined, Bianchi said.

Details have been scant since Tsialas' death, though at the time police said they did not suspect foul play. Anxious for more information, the Tsialas family established a sizable reward fund in November dedicated to finding out more of the circumstances around his death.

Cornell's John Carberry, the senior director of media relations and news, offered the following statement on behalf of the university:

"At this time, Cornell University has not been made aware of any legal action by the Tsialas family, and we cannot comment on potential future litigation. The Cornell University Police continue to actively investigate Antonio Tsialas’s death. We continue to ask anyone who may have information related to the incident to contact us at 607-255-1111. People can also email Cornell Police investigators at cup-inv@cornell.edu or reach out through the Silent Witness Program." 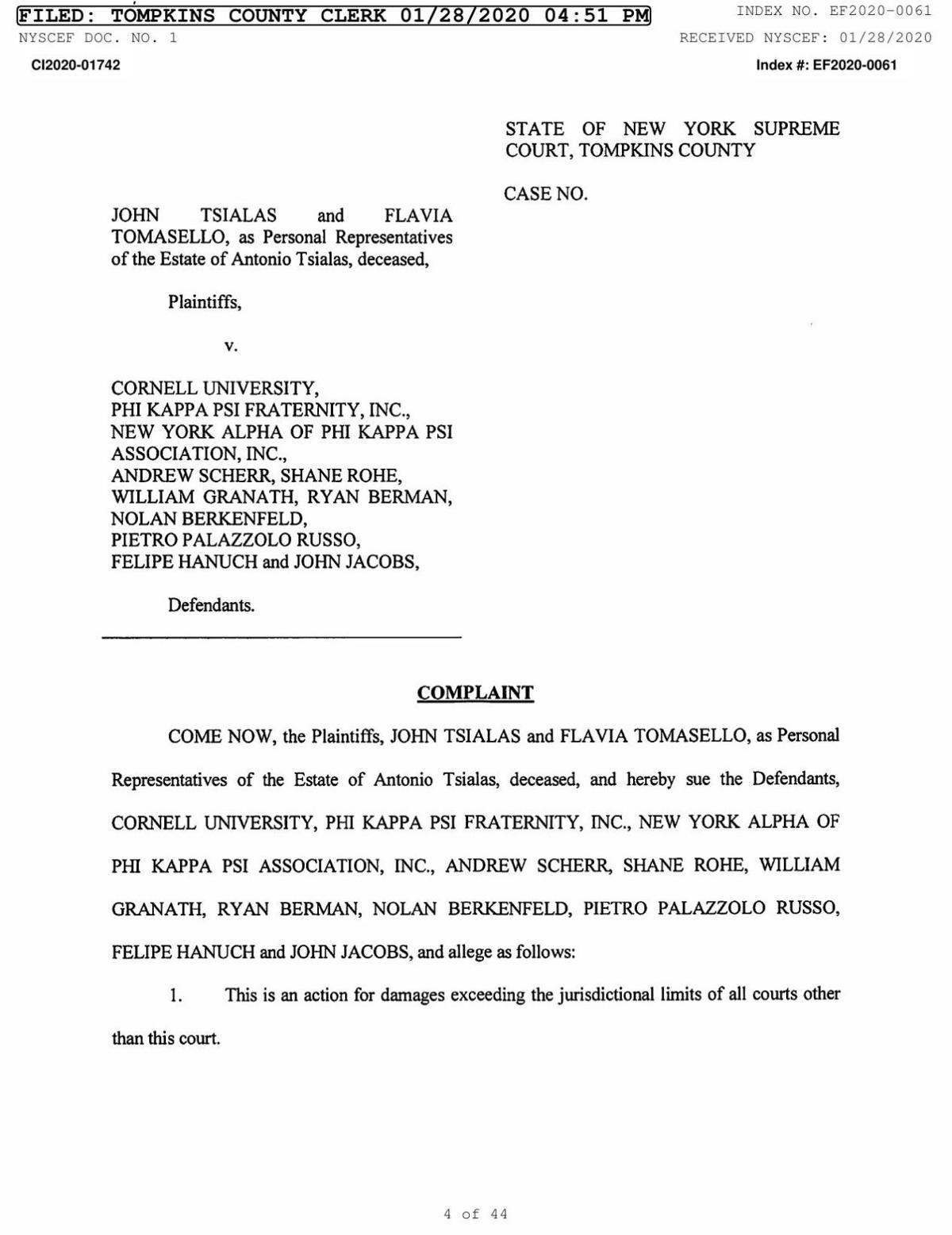