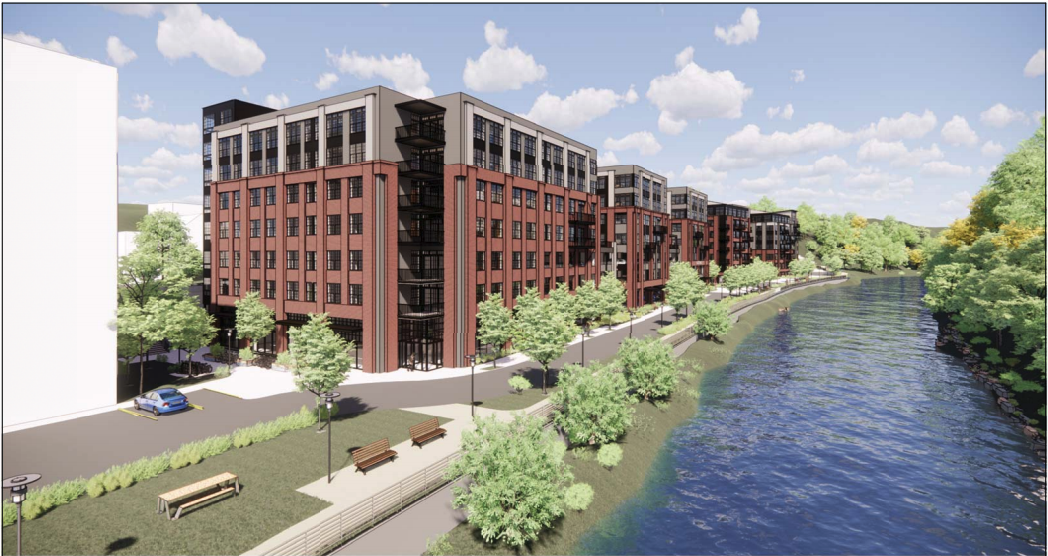 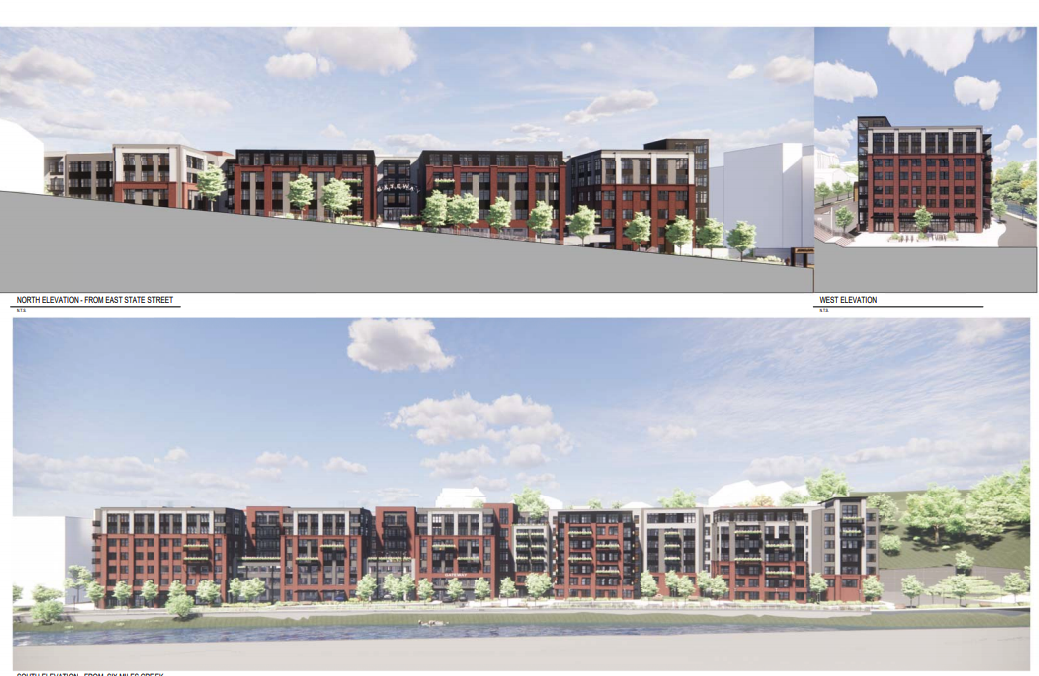 A rendering that shows the difference in topography from the State Street view and the creek walk view.

ITHACA, NY -- The proposed project at 401 E State St. hit a snag when it appeared before the Board of Zoning Appeals on June 1 to seek a height variance. McKinley Development Company is proposing a 340,000 square-foot apartment building that would be home to 267 parking spaces and 347 residential units.

Developers are seeking a height variance of nine feet, hoping to build a 71-foot structure rather than the 62 allowed by zoning laws.Brian Bouchard, an engineer on the project, said the variance was justified because the project will be adding to the Six Mile Creek trail which occupies some of the lot space, and because it will provide public parking after business hours.

He added that the building needs the extra height because of the site’s challenging topography. The sloped site means the grade changes dramatically from one end of the site to the other, and Bouchard argued the extra height was needed to accommodate it. The parking decks on the lower levels will essentially be underground, while the steep grade means the third floor is flush with the sidewalk.

Board member Suzanne Lanyi Charles asked if they could reach the 62-foot height limit by eliminating a level of parking, but Bouchard said that would make the project infeasible.

Board member David Barken wasn’t sold, and insisted that technically, because there are no parking requirements downtown, they would be able to reduce the parking. However, Bouchard reiterated that it would make the project not viable.

Charles asked Barken if he had any suggestions for a feasible alternative, but Barken said he’d need more information.

“That might be missing information,” he said. “But I think there’s a way to design a structure here that meets the zoning and allows them to utilize their property to the largest extent.”

Board member Steven Henderson was in agreement with Barken. He said the 71-foot building from the creek walk would just be too big for how close it is to the trail.

All three board members in attendance would have had to vote to approve the variance in order for it to move forward, and with Barken and Henderson staunchly against it, the board and development group were at an impasse.

Bouchard said the unique characteristics of the site made complying to the zoning requirements difficult.

“We wouldn’t be here if we could comply with zoning,” he said. “I’m at a loss to see what we could do more prior to the next meeting aside from the long list of work we’ve done over the past nine months.”

Charles played peacekeeper, noting that it was the board’s job to offer relief when there are unusual circumstances.

“In my view, this site has such unusual circumstances that if we’re thinking about the impact of this extra nine feet of height on East State Street there’s ample reason to think the nine feet isn’t such an imposition given the unique topography of the site,” she said. “But I see that from the creek side you’re going to get the full force of that building.”

She asked Barken and Henderson if they could provide specific guidance for the applicants to consider going forward.

Henderson reiterated that it was the 71 feet facing the creek side that was bothering him, and that he’d appreciate seeing that half of the top floor reduced down to the 62 feet.

No promises were made, but Bouchard said they could look into the possibility of stepping that section back and see if it would be feasible.

Ultimately, the board decided to postpone the vote until the July 6 meeting.

The City of Ithaca should be worried about how 347 new residential units -- all in located in the same area -- will affect traffic. Has the Tompkins County Highway Dept civil engineer even run any simulations yet? Who is going to pay the cost to reroute or beef up the road infrastructure to properly accommodate the increased traffic? I bet it won't be the developer. I haven't investigated but is the developer going to get tax breaks too?

The city of Ithaca - who is that? Is it City Council Members who continue to let Ithaca devolve into a College Town corporate strip mall disney-land?? Or is it the people who live and work in Ithaca? Cuz if it's the latter, don't worry about it, I'm already planning on moving away from the absurd rental cash grab capitalist wet dream that Ithaca grotesquely resembles now in under just 6 years of residency.