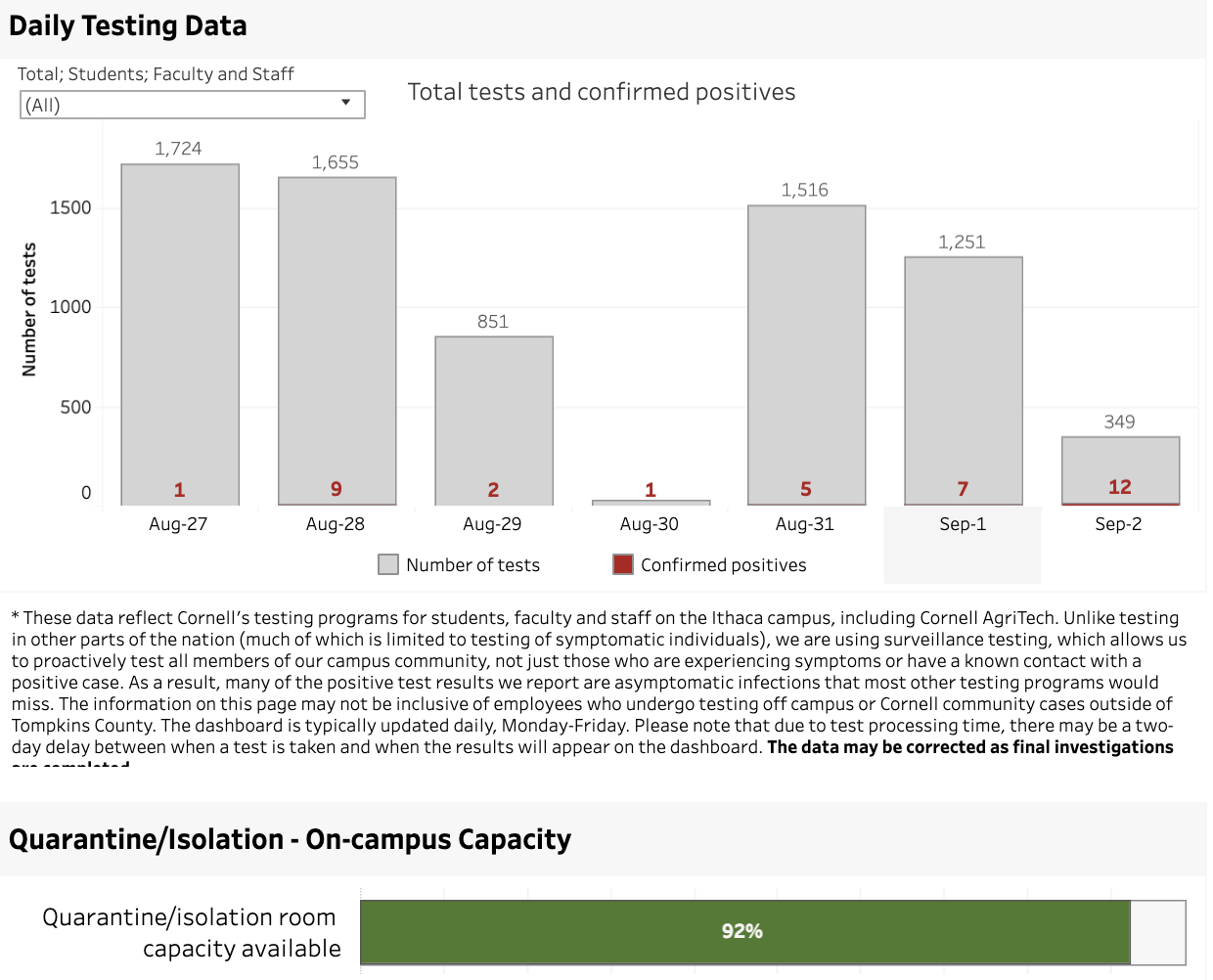 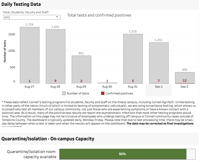 Screenshot of Cornell's dashboard from Aug. 27 – Sept. 2. Click through to see each week's data charts. 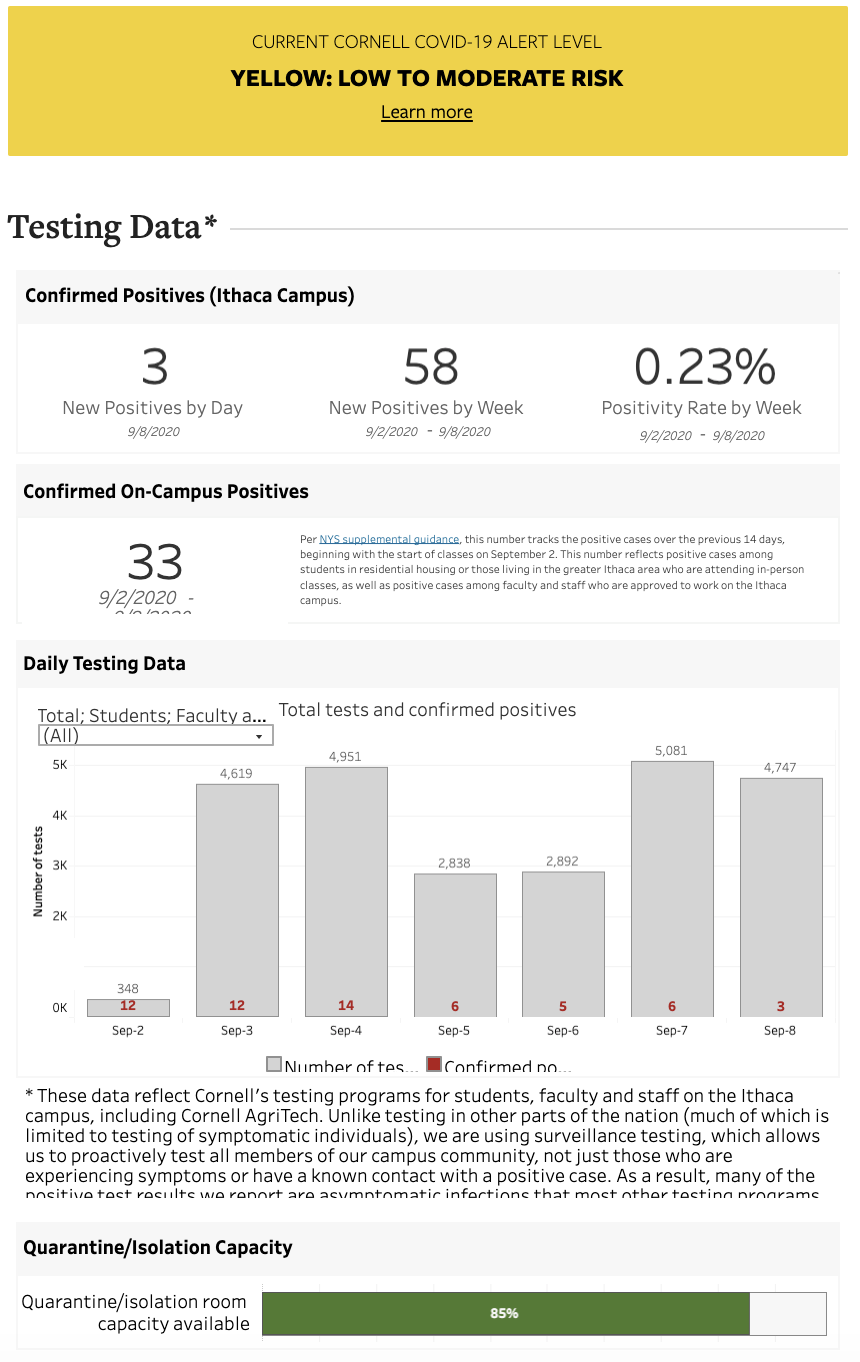 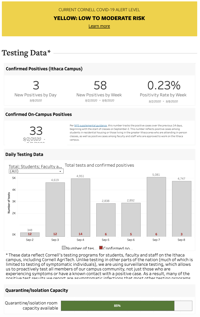 Screenshot of Cornell's dashboard from Sept. 2 – Sept. 8. Click through to see each week's data charts. 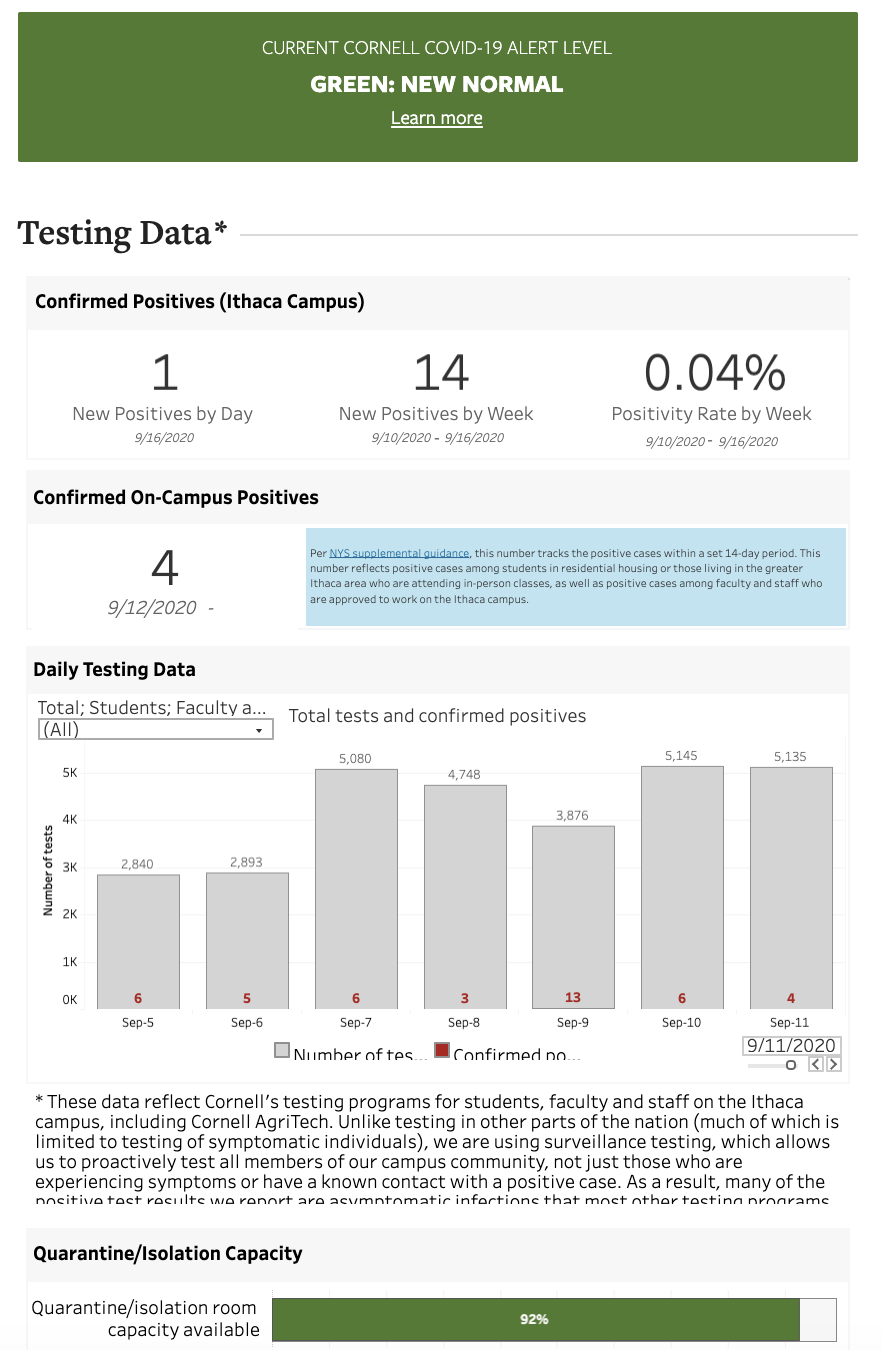 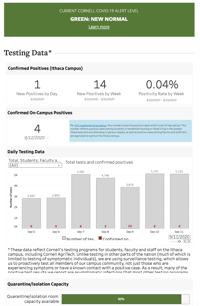 Screenshot of Cornell's dashboard from Sept. 5 – Sept. 11. Click through to see each week's data charts.

Screenshot of Cornell's dashboard from Aug. 27 – Sept. 2. Click through to see each week's data charts.

Screenshot of Cornell's dashboard from Sept. 2 – Sept. 8. Click through to see each week's data charts.

Screenshot of Cornell's dashboard from Sept. 5 – Sept. 11. Click through to see each week's data charts.

As of Tuesday Cornell seems to have wrangled its total number of COVID cases down to five this week; a marked improvement from two weeks ago when it technically crossed the state’s 100 case threshold.

On Aug. 28, Governor Andrew Cuomo announced that schools would be required to close for two weeks if they reached 100 cases within a 14-day period. And in a supporting document, the governor clarified that arrival cases are not counted toward the threshold unless the virus was transmitted during a violation of quarantine restrictions.

While the clause was clearly meant to pressure universities to be strict with their students who were returning to campus— that negligence and impunity would have consequences for both the students and the colleges— what the governor failed to do was specify when colleges were expected to begin counting, who was expected to keep count and what happened after the two week period had elapsed.

Some universities had already completed move-in procedures, others were still figuring out how students would return, and Cornell was right in the middle. The university had begun move-in on Aug. 17.

Because of their position and their testing procedures, Cornell began it’s 14-day track on Sept. 2. John Carberry, senior director of media relations and news at the university, explained that the date was selected because the university was in the middle of conducting arrival tests until Aug. 30, and intended to leave Aug. 31 and Sept. 1 for catch-up testing, which preceded the official start to on-campus activities.

“We calculated the starting date based on our best understanding of how NYS desired institutions to handle commencement of on-campus operations for tracking purposes,” he said.

Then on Sept. 2, Cornell recorded 12 new COVID-19 cases. They were related to an original cluster of nine unique cases that had been recorded on Aug. 28 and whose spread had been increasing among the student athlete population. Since reopening, Cornell had recorded 47 positive COVID-19 cases, of which 39 were unique and only 12 could be counted.

“Unique” cases in this instance refers to COVID cases that are traceable back to an on-campus source and are not attributable to an interaction a campus member may have had prior to receiving arriving to campus.

In the following week-and-a-half, cases in Tompkins County rose by 98. By Sept. 11, Cornell had recorded 81 positives and only a little over 50 were “confirmed on-campus positives”. In the third week, after a clarification on Sept. 14 by the governor, Cornell was allowed to scrap its previous week's unique numbers for single digits.

In an interview, Joel Malina, Cornell University vice president of university relations, said that a recent comment by the governor had clarified the university's misconception that the 14 day total is meant to occur in intervals starting on Aug. 28 and then restarting on Sept. 12. Malina said the university had updated its dashboard to reflect the changes since receiving that information from the governor.

Multiple requests were made to the university via phone and email to learn when it had conducted its last arrival test and what the true total would have been for on-campus positives if they’d begun counting on the date provided by the governor, but the university has yet to respond.

A spokesperson for the Tompkins County Health Department said that it does not currently measure the 100-case threshold for any of the colleges in the county and views it as a matter between the state and the individual institutions. The health department left the start date to the discretion of the university. He further clarified the health department’s position by adding that it tracks all positive cases within the county that they are able to identify, not just particular institutions and they would know if Cornell reached 100 positives. Between Aug. 28 and Sept. 11, Tompkins county saw 116 new COVID-19 cases.

“Based on what is in the guidance, August 28- Sept. 11 was the first two-week block, but it is continuing in 14-day increments. The Health Department is primarily involved if an institution needs to move to remote instruction as a result of getting 100 cases during this two-week period. The Health Department would assist in evaluating whether or not an institution can re-open for in-person learning.”

EDITOR'S NOTE: A previous version of this article suggested that the governor had publicly commented that the 14-day total was meant to be counted in intervals, opposed to a rolling 14-day total. The clarification was made to university officials, who shared that information with the Ithaca Times.