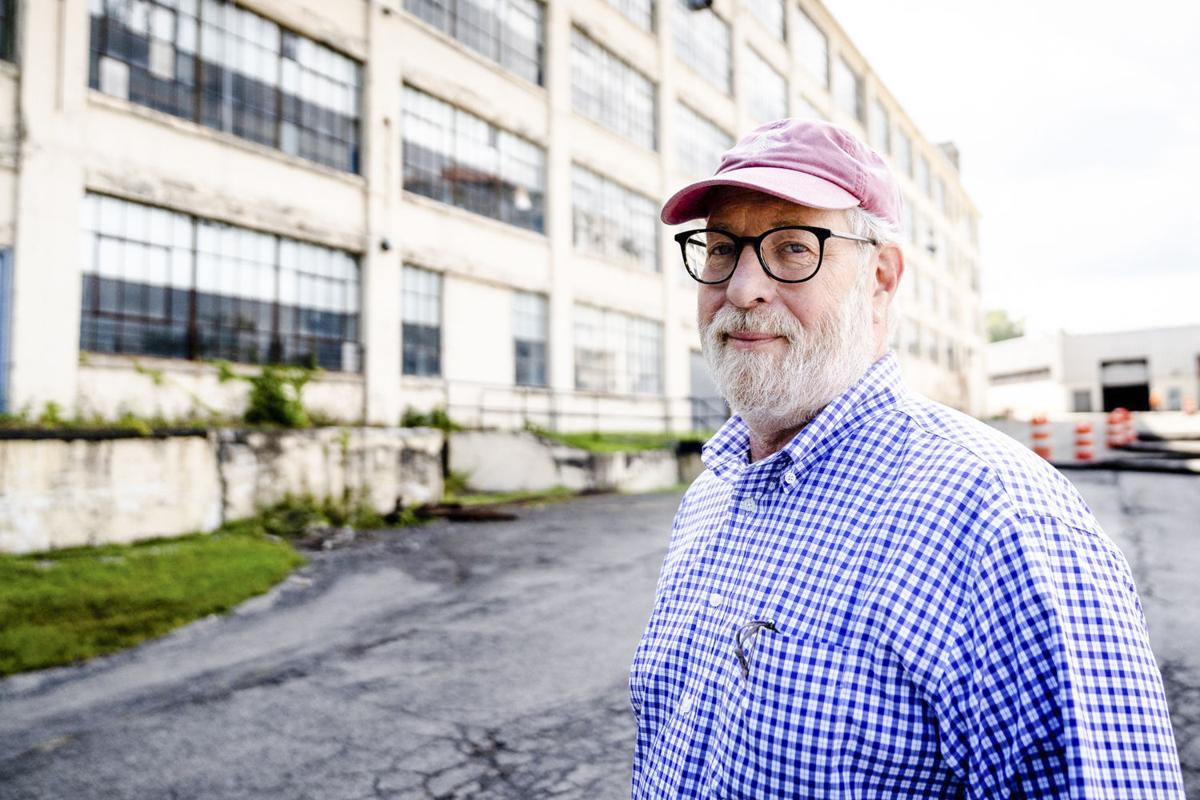 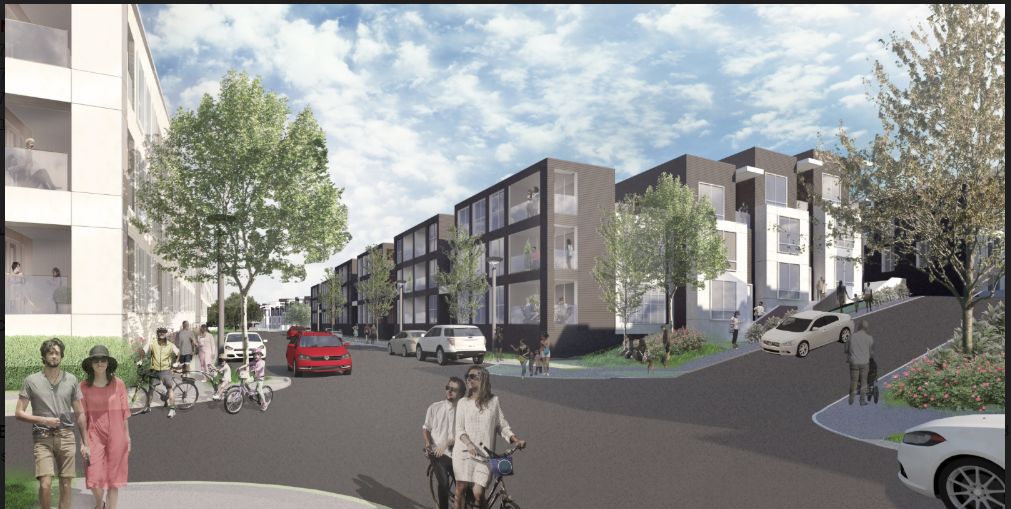 Developer David Lubin, leader of Elmira-based L Enterprises, sits on a dusty old chair on a cracked concrete walkway that’s filled with weeds, gazing out beneath his trademark baseball cap. Occasionally, construction vehicles that don’t seem to be doing much of anything loudly pass by, forcing him to pause his sentence while they kick up dust and gravel.

The landscape doesn’t look like much now, and hasn’t for a long time. But a few years down the road, if everything goes according to Lubin’s plan, the 95-acre site on South Aurora Street could slowly transform into his magnum opus right before the city’s eyes.

The conversation starts with Lubin cautioning that he is not a politician: “I say what I mean, which precludes me from being a politician,” he said, smirking.

Lubin, who is 66 years old, has remained largely withdrawn from the press over the last several years, opting to let his local consultants and spokespeople handle most of the media responsibilities while his ideas underwent the typically tough-minded Ithaca planning process. That may be by design: he admits that his lack of filter has probably slowed his own projects’ progress down (something those interviewed for this story agreed on) so he has ceded messaging to people like Vicki Taylor Brous, his most prominent local representative, or Jamie Gensel, the engineer leading the way on Chain Works.

Whether Ithacans know his name or not, Lubin will soon deliver two of the most significant developments in modern Ithaca history: his Harold’s Square project, which is mid-construction, will become the tallest buildling on the Commons, while Chain Works District, the neighborhood-sized redevelopment of the former Morse Chain factory site on South Hill, just received final approval on its site plan. Outside of projects undertaken by Cornell University, Chain Works is possibly the largest construction project in the City of Ithaca’s history, measuring 1.7 million square feet total with 915 units of housing and several buildings split between commercial, residential and industrial uses.

But what he has said, over the years and now, illuminates why he chose to take on two of the most difficult projects in recent Ithaca history, and in interviews he’s surprisingly gregarious for someone who has made such an effort to avoid the spotlight. Counter to his occasional gruffness, that’s one side of his personality that has probably helped him over the years. The two projects Lubin chose were likely two of the most challenging he could have possibly chosen by which to leave his mark on the City of Ithaca, but the other side of that coin is they give him the chance to leave behind a “legacy project,” as he calls it, even at the cost of time and patience. One, Harold’s Square, took years to get approved and has been hampered for even more time by lack of office-space tenant interest early and construction delays later. The project has primarily served only to anger Commons patrons and business owners over the last year or so since its work has forced the closing of the Commons Playground by order of the city. The Chain Works District, on the other hand, required an extensive negotiation with the Emerson Corporation, the site’s former operators, regarding how much environmental clean-up was needed to bring the land up to residential livability standards. To indicate how severely the clean-up was needed, the City of Ithaca took five years with its environmental review, according to Planning Department Director JoAnn Cornish.

“I thought I had a good vision, and no one else wanted to take it on,” Lubin said. “I like adaptive re-use, taking what’s here and redeveloping it for today and improving it and making it ready for tomorrow. [...] I’ve talked to a lot of developers, and they say ‘Oh, I can take this piece and build a nice little apartment complex here.’ But they don’t understand that this can be a neighborhood, we can integrate it.”

After making a career in retail, inheriting the business from his father, Lubin entered the real estate industry when he felt online marketplaces threatening the future of brick and mortar stores in the late 1990s. Lubin’s Ithaca roots, though they exist, are also not as apparent as other local developers; Travis-Hyde, for instance, has built projects all over town for decades as the company shifted from Mack Travis to his son and son-in-law Frost Travis and Chris Hyde, respectively. Meanwhile, Lubin made his development mark in Elmira with hotels, after closing down the Harold’s Army Navy chain of stores, one of which used to occupy the ground-level of one of the storefronts Lubin is currently building over on the Commons. Harold’s Square gets its name from Lubin’s father.

Lubin’s two projects that now seem imminent did not always have that appearance. Changing the face of Ithaca, which the projects do for better or worse, was always going to come with its set of challenges. For Harold’s Square, it was the Commons reconstruction, which Lubin helped with and which was supposed to coincide with work on Harold’s Square in hopes that both could open at the same time. The Commons took longer than expected, opening in 2015, and even then Harold’s Square still wasn’t ready to move forward-- demolition finally took place in 2017.

“I like a challenge,” Lubin said. “The idea of a community just seems so unique. I thought I’d give it a try. I’ve done well, I’ve been fortunate [...] I’ve made money, and I put my money back into more projects.”

There is something to the thought that Lubin was the only person willing to take on the challenges, at least according to city officials. Cornish expressed satisfaction that he had followed through on the projects, especially Chain Works, even if their relationship had ups and downs at times (the city was distressed, she said, when Lubin decided to press forward with Harold’s Square after the Commons was finished, bringing construction back to the plaza soon after it left.)

“We so appreciate his taking on such a huge project in what would otherwise be just a ghosted building, deteriorating,” Cornish said. “He actually had the energy, tenacity and interest to actually take it on and we’re getting to the point where we’re actually going to see something happen there. [...] I think people forget the investment he is making.”

Cornish added that she had doubts not just about Chain Works, due to its size, but Harold’s Square too because of its location and the difficulty it faced to attract tenants. She went on to note that the latter project is the most significant development investment in the Commons since she’s been there, and that she thinks Lubin has been able to balance the long-term benefits the project will bring with the frustrating short-term headaches, like the Commons playground’s closure.

But with those efforts comes a certain dose of ignominy, particularly in a community like Ithaca, which is keen on maintaining some iota of its aesthetic in the face of growing development interest and construction. Often, those feelings manifest in anger or sorrow, expressed at public meetings or otherwise, from local residents who feel that the city they’ve enjoyed for eons is slipping from their grasp with every new groundbreaking ceremony. Lubin has faced no shortage of those sentiments. As mentioned before, Harold’s Square will be the first building of its height on the proper Commons, towering above the city’s pedestrian plaza (it will likely be alone only for a few years, before the Green Street Garage redevelopment, which is currently proposed to match Harold’s Square’s 12 floors of height).

Reactions were slightly different for Chain Works, although whether that will hold or not depends on who’s answering. Anecdotally, Ithacans tend to have two inflection points of interest, and passion, with development proposals; one is when the idea is first presented, and the second is when the construction actually begins. Chain Works was awarded final site plan approval earlier this month, passing its largest hurdle left on the way toward construction beginning as the extensive pollutant remediation finishes up in the coming weeks. The site has basically been a blight on the city since it ceased operations. Its long tan and beige buildings are visible from most vantage points throughout Ithaca but have sat idle since 2009, while the ground beneath them remained significantly contaminated from its industrial past. Cornish said she thinks the community benefit will be so obvious that Ithacans will embrace the project early, knowing the alternative was just an empty, polluted plot of land. Lubin’s vision for Chain Works is borderline utopic, and his pride in the project is impossible to stifle during conversation. He calls it a “secret garden.”

There is at least some resentment left over from whatever procedural obstacles Lubin has encountered during his time developing in Ithaca. At one point, he says he feels like he has been painted as “public enemy number 1” and that “If there’s one thing Ithacans have, it’s opinions.” He laments that he hasn’t gotten the support that he expected, something he suspects is a symptom of a general antipathy to changes in the city. But even while grousing, it is evident that Lubin has some measure of affection for the city that he’s about to make an indelible mark on.

“In Ithaca, a developer is a bad name,” Lubin said. “Let’s face it, there’s a lot of slumlords, a lot of people who don’t treat people well. I can understand it. [...] But I understand Ithaca. I understand the people and where they’re coming from. And I said, ‘I think I can work with them and develop some really unique things.’”