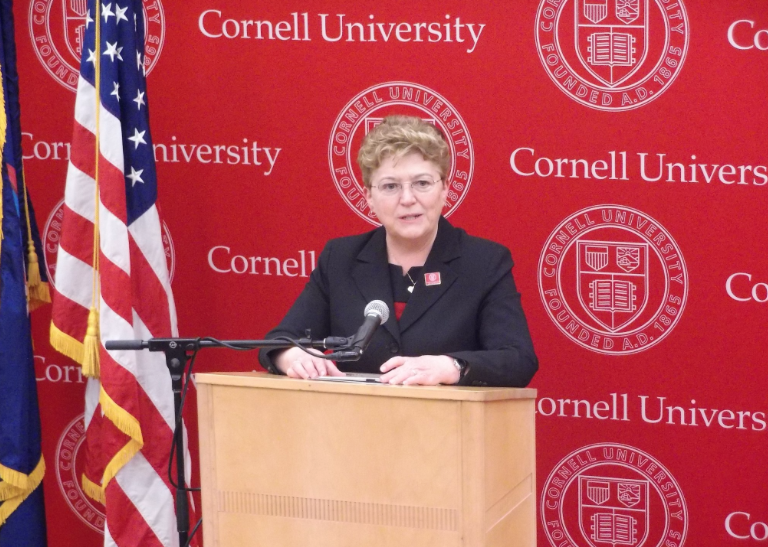 Cornell School of Agriculture and Life Sciences Dean Kathryn Boor announces the founding of a $1.2 million lab to fight the presence of Hemlock Wooly Adelgids in New York State at a Friday press conference. 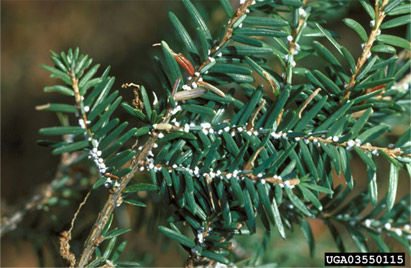 An example of a Hemlock Wooly Adelgid infestation.

Since 1985, entomologists in the Northeastern United States have been struggling to hedge the population growth of an invasive species known as the Hemlock Wooly Adelgid, a tiny, invasive, aphid-like insect that attacks North American hemlocks.

In the three decades since the insect was first spotted in New York State (originally from Asia, the adelgid first made landfall in 1924, when it was spotted in the Pacific Northwest), scientists have been without an effective means of controlling the pesky, 1.5 millimeter nuisances; their population booming to infest large swaths of forest in the Finger Lakes, Catskills and Long Island where the hemlock tree – a “keystone” species in New York State’s forested ecosystem – are prominent.

After the announcement of a $1.2 million initiative to fight the spread of the insect on Friday afternoon, there is an indication the state is finally investing in a viable solution that may finally bring relief to a decades-long headache among environmentalists.

Assisted by a $500,000 grant from the New York State Department of Environmental Conservation’s Environmental Protection Fund, Cornell University and entomologist Mark Whitmore – one of the nation’s foremost experts on the insect – have begun an effort to research and experiment with natural, biological controls to curb the spread of the adelgids right at the source. This money, a small slice of more than $13 million in the governor’s budget committed to fight invasives, will go toward the research and breeding of a number of natural predators to the adelgid that have proven successful in the Pacific Northwest, a strategy to reduce the prevalence of these pests in as natural a way as possible.

“We’ve tried a lot of things, but we found one of the most effective ways of controlling not only this invasive, but many other invasives is biological control,” said Executive Deputy Commissioner Kenneth Lynch. “It takes a lot of research and a lot of time, trying different insects and a lot of trial and error. But I think we have a productive solution now.”

This is the beetle that will save New York State's hemlock trees: pic.twitter.com/Oj0TWDTe4p

How Does It Work?

At present, the New York State DEC utilizes several different methods to control the pests: Chemical controls, the application of insecticides that are effective primarily for small quantities of trees, and biological controls, i.e. the introduction of natural predators like the Laricobius nigrinusn (a beetle native to the Pacific Northwest) to thwart the infestation’s spread in a way that does little harm to the environment.

After some success in introducing the beetle to ecosystems in the Finger Lakes, the state is now providing Whitmore with the resources to introduce the beetle – and several other natural predators to the adelgid from its native Asia – to the region’s forests on a scale large-enough to have significant impacts on adelgid populations statewide.

“When you get a native insect, it has all its predators already there, so its population is regulated naturally,” said Whitmore in an interview following Friday’s announcement. “So what we’re doing is taking the lesson of what we’ve learned in the Pacific Northwest and applying that out here.”

There are a number of complications to the plan: with a more than 30-year head start, there is a limit to where Whitmore will be able to immediately introduce thousands of insects he would need to eradicate the pest completely, meaning the location and method with which he applies the predator species need to be researched and planned carefully. Whitmore said he and his team will be focusing firstly on areas where the infestation is newer – such as in the Finger Lakes – while saving their resources against locations like in the lower Hudson Valley and the Catskills, where the adelgids have been present longest and tree decline is greatest.

“We’re limited in the number of bugs we have, so I don’t want to put them in places where they won’t be effective,” Whitmore said. “I’m not going to put them in an area where they won’t be able to save the trees. I’d rather have them in an area where the populations will build and they’ll have a chance to save the trees. I want this to become so well-developed that, by the time the adelgids get to the Adirondacks, we’ll have viable options to deal with the populations there.”

There may also be some challenges with the difference in the two biomes that are not yet known yet, the sustainability of a large population of predator insects an unanswered question between the wetter climate of the Pacific Northwest and the upper Appalachian Mountains.

“We’ll find out,” Whitmore said. “And the only way to find out is through experimentation.”

There’s also the unknown implications of what will happen to the greater ecosystem that may result from the introduction of numerous new species into the food chain; the practice of essentially injecting another invasive species into the ecosystem to fight the presence of another one.

To this point, Whitmore urges the public to “trust the process.”

“These were carefully researched, and we’re very highly regulated as a profession,” said Whitmore. “We also are very self-regulating. We recognize all the mistakes that have been made in the past and are absolutely certain that these insects will only eat the targeted insects. We’ve done lots of testing, lots of permitting and we’re under a lot of regulations in the field. And I’m glad about that. I’ll be happy to work with the USDA on keeping it that way.”