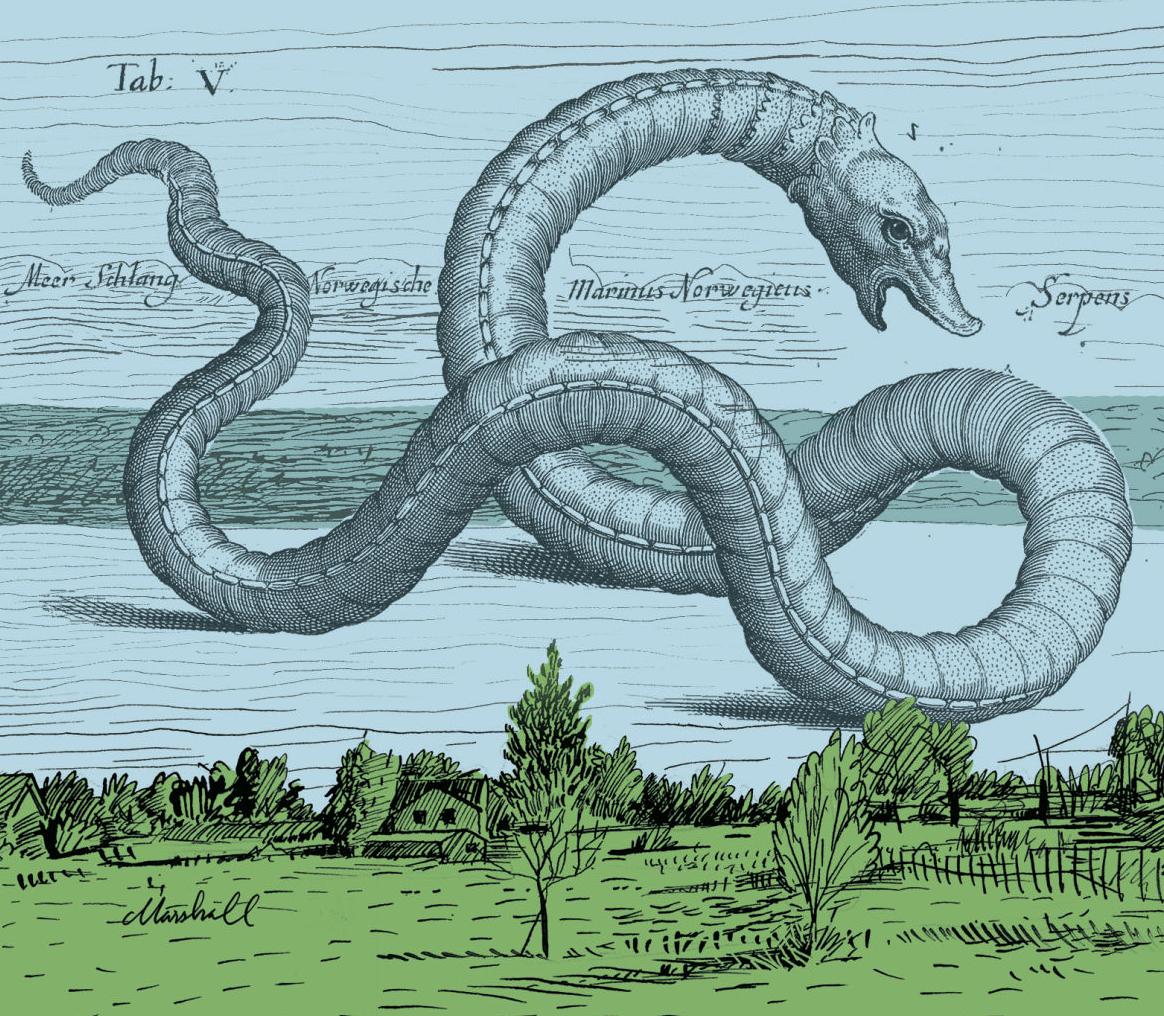 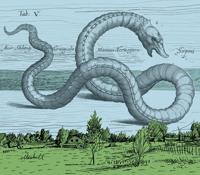 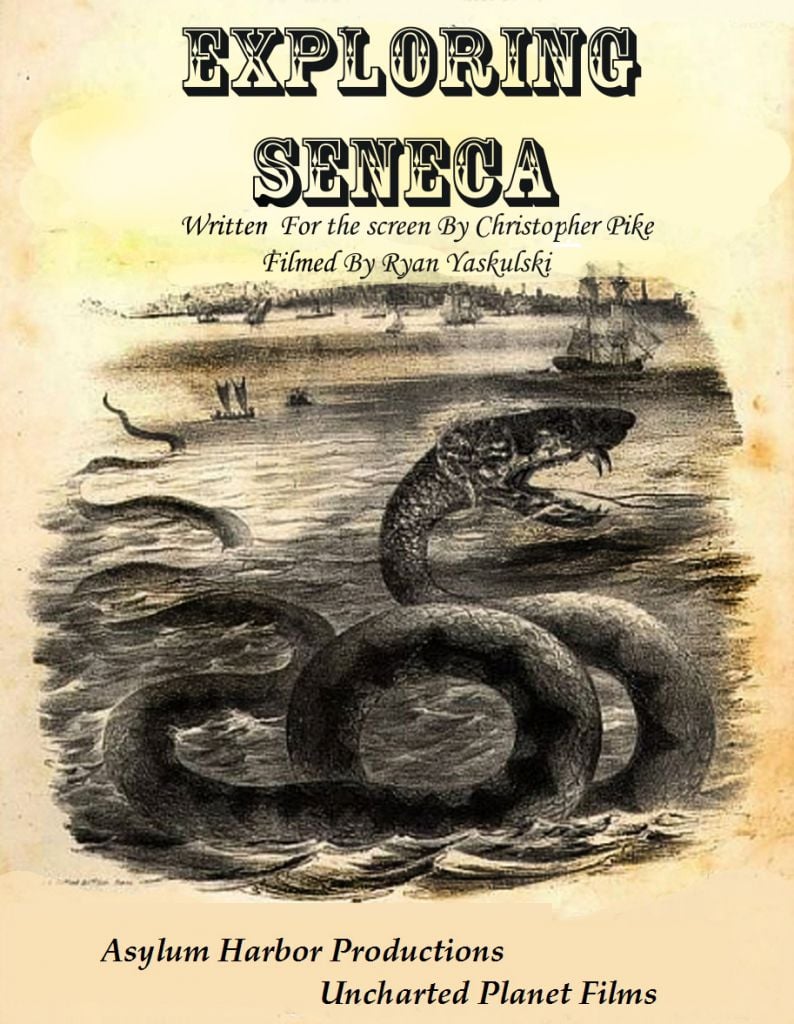 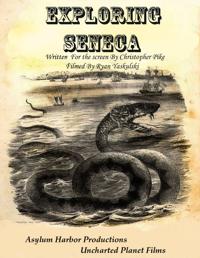 There is something about the Finger Lakes that suggests the possibility of supernatural and mysterious things. Legends and stories abound of hauntings, spirit rapping, utopian communities, ancient ruins, inexplicable phenomena, extraterrestrial visits and the occasional glimpse of a sasquatch.  Among the most intriguing stories are the numerous reported sightings in the deepest of the lakes of large aquatic creatures: lake monsters.

Each of the Finger Lakes has its own personality, of course, but the big lakes – Seneca and Cayuga – seem to fit within a different, more mysterious category. Their waters are colder, their moods are darker, their waves are bigger. You can travel on boats to and from the sea on these two lakes, and their sheer size seems to hint at the possibility of ancient aquatic megafauna.  Native American Indians believed Seneca Lake to be a bottomless lake, with a monster that lived in its depths. Almost forty miles long each and one to three miles in width, the pitch-black depths of both of them, hundreds of feet deeper than sunlight can penetrate, descend to depths below sea level.

That reports of monsters in Cayuga Lake were numerous, perhaps even routine, in the 1800s can be inferred from a story in the January 5, 1897 edition of the Ithaca Journal.  Incredibly, the piece reported that a recent sighting marked the 69th consecutive year in which there was a confirmed encounter with the monster nicknamed “Old Greeny.” The story went on to recount that members of the newspaper staff had been living in daily anticipation of Old Greeny’s appearance, and had refused reporting assignments that would have taken them near the lake because they were afraid of the monster.The 1897 incident was reported to have been by an Ithaca resident who was driving along the lake’s eastern shore and saw “what he knew must be the large, long sea serpent.”  The story also quoted a ‘tramp’, however, who told a reporter that he believed it to be a muskrat.

More sporadic and isolated reports of the creature continued until 1929, when people began reporting not one, but two creatures seen together along the Lake's eastern shore. The creatures were described by witnesses as being approximately 12 to 15 feet in length.  It was speculated that they might be: "...members of the Seneca Lake sea serpent family that found their way into the local waters through a subterranean channel which is believed to exist between the two lakes." Legends of tunnels connecting Cayuga and Seneca Lakes have long circulated, which anyone with a rudimentary grasp of the notion of water seeking its own level knows would be impossible.

Occasional other reports of Old Greeny have certainly been made since then, including a 1974 attack in which a teenage boy apparently had his arm broken by the bite of a large, eel-like creature, and the 1979 encounter by a local professional diver of a submerged animal 30 to 35 feet in length.  Sill, all the reported sightings save one have been by one or two persons.

The incident with the greatest number of witnesses, and therefore the most credible lake monster encounter, happened on the evening of July 14, 1899 on Seneca Lake.  The sidewheeled steamboat Otetiani, named to evoke the region’s Iroquois past, was traveling north toward Geneva from Watkins Glen with several dozen passengers at about 7:00 p.m.  Then, as in 2018, sunset was at approximately 8:40, so there was plenty of daylight left, and it had been a sunny and seasonably warm (high 79) day. Somewhere between Dresden on the west side of the lake and Willard on the east side, pilot Frederick Rose reported that approximately 400 yards ahead of the boat was what appeared to be an overturned boat. Captain Carleton Herendeen examined the thing with his telescope, later describing its appearance as being “25 feet long with a very sharp bow and long-narrow stern”.

Passengers began to gather.  It was a group with some ostensibly credible witnesses, including two Commissioners of Public Works, a Police Commissioner, the manager of the Geneva Telephone Company, and a geology professor.

As Captain Herendeen completed his inspection, the pilot signaled the engineer to slow the boat down. The steamboat approached to within 100 yards and lowered a boat to take a closer look. Suddenly, the object turned and began to move away.  The captain immediately ordered “full speed ahead.” As the thing was moving slowly, the steamboat gained on it easily. The object turned again, this time toward the steamboat, and “raising its head, looked in the direction of the boat and opened its mouth, displaying two rows of sharp, white teeth.”  Captain Herendeen declared that he would ram the creature and take it alive, if possible. Otherwise he would kill it, and either take it aboard or tow it to Geneva.

This was the United States in 1899, when conservation of flora and fauna was still kind of a fringe idea.  Out west, the bison population, perhaps ten million in 1850, had been reduced to fewer than a thousand. Passenger pigeons, numbering in the billions in 1860, were on the brink of extinction.  And so, the boat was turned so that the boat would approach the creature from the side at ramming speed. The deck of the steamboat was crowded with passengers who were ordered by the captain to put on life preservers.  According to the Geneva Gazette: “Every eye on deck was fixed on the monster and hardly a person was breathing normally.  While the boat was yet some distance from it, the monster again looked at the boat, sank out of sight and the boat passed over the spot where it had been.”

As the steamboat approached to within 50 yards of the creature, the captain gave the order to  turn the boat so that its paddlewheel would strike the creature midway between its head and tail. The boat went ahead full steam and struck the monster with enough impact that many of the passengers were thrown off their feet.  The mortally wounded animal lay in the water next to the steamboat. “It raised its head, gave what sounded like a gasp, and lay quiet. Its spinal column had been broken and it was dead.”

Lifeboats were immediately lowered and lines were strung around the body.  Passengers and crew tried to secure the carcass. In the end, though it proved too heavy or unwieldy and dropped into the water, sinking six hundred feet to the bottom of Seneca Lake.

The ship reached Geneva after dark and passengers began to tell their stories of the incident.  While all agreed that a monster had been seen, differing versions of the length of the monster — from 25 to as much as 90 feet — strained the credibility of the accounts.

The Rochester Herald said that Professor  George R. Elwood, the geologist on board, and who had been in one of the lifeboats trying to secure the body, gave what was considered the “most careful and perhaps most trustworthy account.” He thought it was a clidastes, an extinct marine lizard from the mosasaur family that lived in what is now the United States until it disappeared from the fossil record at the end of the Cretaceous Period, about 66 million years ago.

Lest skepticism get the better of us, consider that in December 1938, a South African fisherman caught a coelacanth, which is a fish thought to have been extinct since it disappeared from the fossil record at the end of the Cretaceous Period, about 66 million years ago.

What might it have been?  It hardly seems likely that so many people could have imagined something so vivid if there had been nothing there.  Lake sturgeon, indigenous to both big lakes, can live to be as old as 100 years, grow to nine feet long and 300 pounds.  Their skin is a shark-like dull gray. Eels are darker but smaller, not getting much longer than five feet. Muskelunge can also get to over five feet long and weigh seventy pounds.  Plus they have rows of sharp teeth. None are apt to convince a boatload of people that they are in the presence of a twenty-five foot monster.

It was suggested by cynics that the whole thing was a hoax perpetrated by the passengers and crew, which is also exceedingly unlikely.  Dozens of people would have had to have kept the secret for the rest of their lives, while human nature suggests that no group larger than three people can be trusted to reliably keep a secret for a long weekend.

The Geneva Historical Society can document at least 20 separate reported sightings of the Seneca Lake monster, most recently in 2013.  Cayuga’s Old Greeny has a Facebook page. Clearly, the idea that the big lakes harbor mysteries beyond our knowledge is one that has a stubborn hold on our collective imagination.  It’s part of the charm of living in the Finger Lakes.