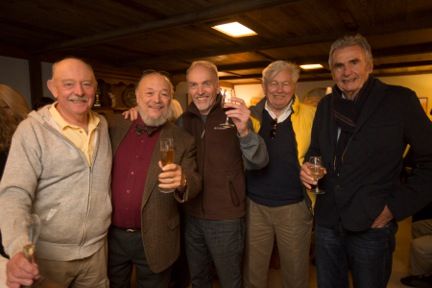 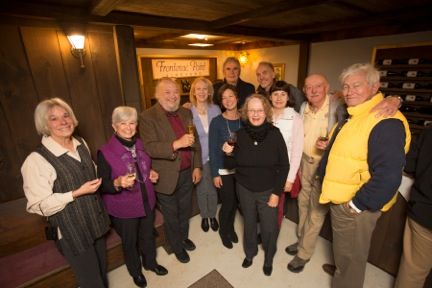 TRUMANSBURG-- On October 18, 2015 Frontenac Point Vineyard - Estate Winery hosted a gathering of some of the Finger Lakes’ wine and food pioneers to reflect on the 1970s farm winery movement and look at the future of New York wineries.

Frontenac Point winery owners, Jim and Carol Doolittle, who played roles shepherding the farm winery movement while working in state government in Albany, were joined by winemaker Hermann Wiemer who founded Hermann J. Wiemer Vineyard; Bill and Hope Moffett, co-founders of the international industry trade magazine Vineyard & Winery Management; author Michael Turback, whose trendsetting restaurant in the 1980s, Turback’s of Ithaca, featured the first all-New York State wine list and a menu that sparked the locavore movement; and chef Etienne Merle, who opened L’Auberge du Cochon Rouge in Ithaca, in 1970 with a focus on local, seasonal produce and Finger Lakes wines. Ted Marks, owner of Atwater Estate Vineyards, which is located on the property originally owned by Moffett and others in the wine and hospitality business joined the conversation.

After exchanging thoughts on what worked and what didn’t work in the 1970s, they discussed current topics including the Third Wine, Beer, Spirits & Cider Summit held by Governor Cuomo on October 7, and the New York State Liquor Authority’s actions in response to the information presented there. Some thought that the current New York Lt Governor, Kathy Hochul, could take on the leadership role as Lt. Governor Mary Anne Krupsak did in the 1970s when she mobilized grape growers and legislators to pass the Farm Winery legislation that saved the New York rural economy from desolation. The consensus was that there are major issues facing wineries that the Lt. Governor could successfully tackle today.

`Local author Sarah S. Thompson joined the conversation to discuss and sign her new book, Finger Lakes Wine Country (March 2015, Arcadia Publishing), a history covering 150 years of viticulture and winemaking in the Finger Lakes. Thompson’s book, and her extensive research and meeting with winery owners, gave impetus for the gathering at Frontenac Point. The book is available at local booksellers, national bookstores and retail chains, and Amazon.com.

“The opportunity to host this gathering was too good to pass up. Sarah’s book is enjoyable and informative. As we approach the 40th anniversary, next year, of the NY Farm Winery Act this was a perfect time to look forward to the next generation of winery owners with friends who are still here. We, and others who could not attend, jump-started the New York wine industry that has grown under the guidance of the New York Wine and Grape Foundation to what it is today, ” said winery owner Carol Doolittle.