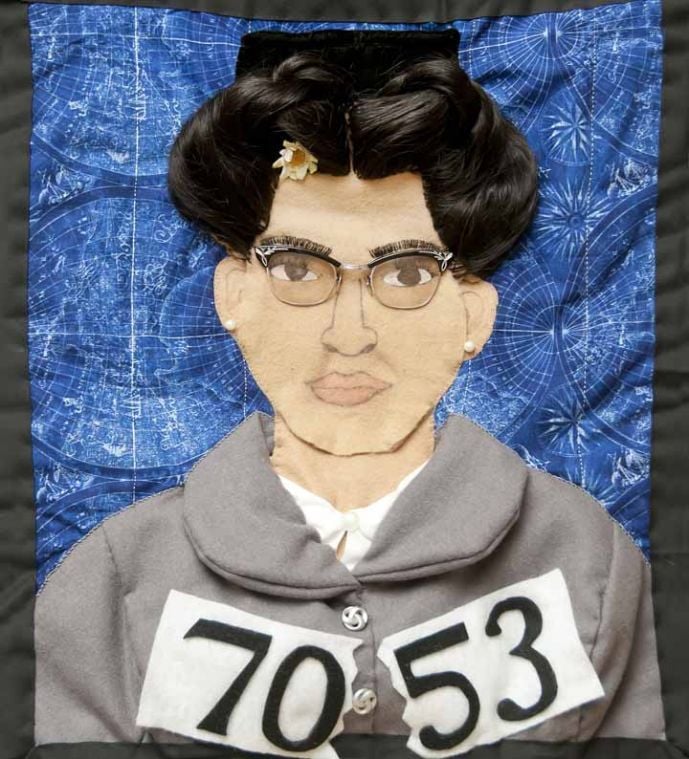 The art quilt, “Rosa Parks, Whose ‘No’ in 1955 Launched the Montgomery Bus Boycott and Was Heard Around the World,” created by Cornell University professor Riché Richardson for the Rosa Parks Museum in Montgomery, Ala. 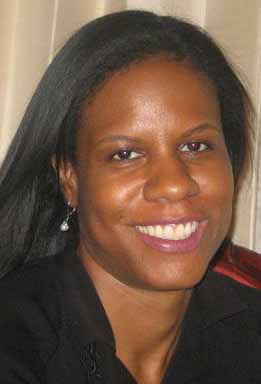 The art quilt, “Rosa Parks, Whose ‘No’ in 1955 Launched the Montgomery Bus Boycott and Was Heard Around the World,” created by Cornell University professor Riché Richardson for the Rosa Parks Museum in Montgomery, Ala.

On Monday, Feb. 4, Civil Rights activist Rosa Parks would have been 100 years old.

Tomorrow, Cornell University will offer up its part in nationwide celebrations of Parks and what she meant to the Civil Rights movement. Professor Riché Richardson will deliver a lecture , titled “Rosa Parks @ 100,” which will take place at 4:30 p.m. Thursday, Feb. 7, at the Africana Studies and Research Center at Cornell University, located at 310 Triphammer Road.

Richardson, an associate professor in the Africana Studies and Research Center at Cornell University where she also serves as Director of Undergraduate Studies, is a scholar of African American literature with additional specialties in American literature, Southern studies and gender studies.

On Monday, Richardson gave a portion of Thursday’s upcoming lecture at the Rosa Parks Museum in her hometown of Montgomery, Ala. In addition, her art quilt, “Rosa Parks, Whose ‘No’ in 1955 Launched the Montgomery Bus Boycott and Was Heard Around the World,” was among the art presented at the historic celebration honoring Parks.

With so many actions defining the Civil Rights movement, Richardson said Parks’s decision to stay seated on a bus was monumental at that time.

“The action of Rosa Parks, through her choice to remain seated, birthed an international movement for civil and human rights that makes it fitting to think of her not only as ‘the Mother of the Civil Rights Movement,’ but also as a person, a woman, who changed the world,” she said in a prepared statement. “To this day, her example brings hope and inspiration to people everywhere, including many children. When Rosa Parks sat down, American democracy moved forward. The project of freedom moved forward.”

The impact of Parks’s activism wasn’t just felt on a national movement level — it also made an impact, personally, for Richardson. The professor noted that Parks’s early work dealt with the NAACP Youth Council and was committed to helping children gain access to segregated libraries.

“When I was 17, I wrote a poem honoring her, titled ‘Together We Will Win,’ during a period when I had begun to work with youth as a volunteer myself,” Richardson said. “I attended St. Jude Educational Institute in Montgomery, whose campus is best historically known as the final camping place for Selma-to-Montgomery marchers in 1965.

“Rosa Parks’s best friend, Johnnie Rebecca Carr, who served as President of the Montgomery Improvement Association, is also my great aunt,” she added, “and so brought civil rights history to life for me and demonstrated its continuing significance through her work.”

Richardson said that Parks is “one of the best ambassadors for freedom in U.S. history, and one of the most significant agents of change.” She noted that during during Parks’s lifetime, she was honored with the Presidential Medal of Freedom and the Congressional Gold Medal of Honor, and she will be the first black person to be represented in Statuary Hall in the U.S. Capitol Building, an honor Richardson said means “a lot. A whole lot.”

“Just as she made history on the bus in 1955, she was also the very first woman and second African American to rest in repose on the Capitol Rotunda in 2005, an honor mainly reserved for U.S. presidents,” Richardson said. “My research in one chapter of the book that I am finishing addresses some of the historical challenges in establishing historical sites and monuments related to African Americans, issues that make it all the more important to celebrate and cherish breakthroughs like this.

“I am also inspired that so many people with diverse perspectives in our culture, and even politicians from liberal to conservative, including U.S. presidents such as Bill Clinton, George W. Bush, and Barack Obama, all value and embrace the legacy of Rosa Parks. That says a lot,” she added. “She is a powerful symbol. Just as she was a person of profound religious faith, she deeply believed in democracy. People in so many places think about what that bus, perhaps the most famous bus in history, means in their own lives, and deeply admire and respect her, and celebrate her.”

The purpose of her talk, Richardson said, is to expand the dialogue on Parks and what she meant in a global sense, as opposed to just being a figure in the Civil Rights movement.

“To focus on her intervention in terms of race and the ways she challenged racism, to think about that moment on the bus, it had implications for sexism,” she said. “If you bring in some larger contexts about gender and sexuality, to put pressure on that moment in 1955 and interpret that more broadly about how she shaped transnational feminism, about how much she, in addition to challenging racism, she challenged sexism in taking her famous stand by sitting down.

“The way Rosa Parks has increasingly been linked to notions of national femininity, as an emblem of national body is fascinating,” Richardson added. “If we look at the encounter on the bus with the state authorities, the bus driver and police officer, other passengers, things have come full circle with very powerful officials from Bill Clinton to George W. Bush have done a lot to promote her and have been accepting of her legacy and embraced that. All of that further demonstrates her national significance.”

Gender roles have largely been missing from the Civil Rights conversation, Richardson said, with female protagonists not gaining the same recognition as their male counterparts.

“Somehow, the gender narrative has been been obscured and that relates to the typical masculine narrative of Civil Rights,” she said. “It seems more important for the models to be of black masculinity, Dr. King being perhaps the best example.”

As for Thursday’s lecture, Richardson is hoping to provide education about who Rosa Parks was and what she has meant to the nation — and what she continues to mean.

“Often, when people think about Civil Rights, they think about it in the past, but what has been happening is these leaders were very forward thinking,” Richardson added. “I want people to see the continuing relevance of these continuing legacies.”

For more information about the event at Cornell University, visit events.cornell.edu/event/rosa_parks_100.