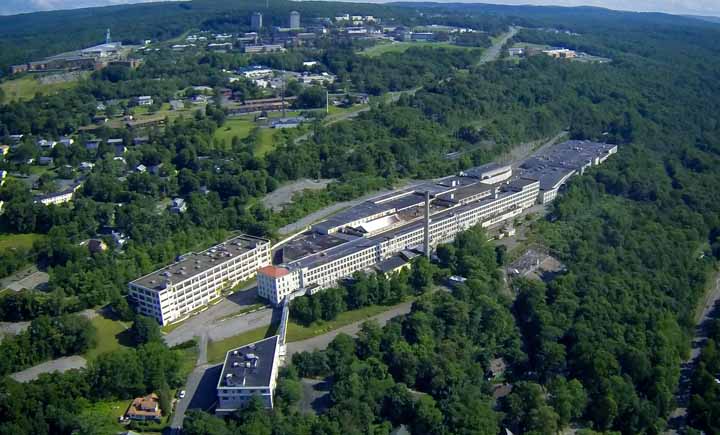 An aerial view of the former Emerson plant on South Hill in Ithaca. 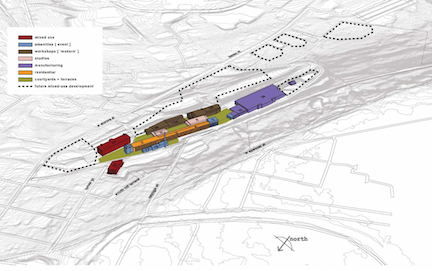 An aerial view of the former Emerson plant on South Hill in Ithaca.

During its Wednesday, Aug. 13 public meeting, City of Ithaca Planning and Economic Development Committee unanimously approved a resolution that approves the proposed Chain Works District project “in concept.” The approval was required under the recently passed Planned Unit Development (PUD) legislation, as all PUD applicants are required to obtain the approval of their project’s concept from Common Council before the site plan review process. With the planning committee’s approval now in the rearview mirror, council will be presented with the same resolution during its September public meeting.

According to Chain Works District developer, UnChained Properties, LLC, the project will seek “to redevelop and rehabilitate more than 800,000-square foot Morse Chain/Emerson Power Transmission facility, which is located on a 95-acre parcel traversing [the boundary of] the city and town of Ithaca.” The project team is simultaneously working with the town, in a quest for the Planned Development Zone (PDZ). At some point, city planning is expected to be declared the lead agency, and representative from both municipalities have discussed the possibility of joint meetings to smooth out an unprecedented project, and process.

“We’re trying to figure out how to proceed in a way where both the town and city get to talk through these issues,” Director of Planning and Economic Development JoAnn Cornish said. She admitted that the city is “making this [the process for considering approval for Chain Works District] up as we go along.”

Brock said she was thankful and grateful for the amount of information that has been communicated in public presentations about the project on behalf of the developer, but had qualms about the current zoning definitions of the project. Brock admitted she wasn’t sure what the protocol was, with it being uncharted waters, but wanted to make sure nothing was getting set in stone in the approval of a concept. Cornish tried to allay her concerns.

“I think any opportunities,” Cornish said, “to discuss concerns about the project will occur during future conversations with the city and the town. As we continue to develop plans for the site, we’ll have to keep track of the comments and concerns and make sure we address them.”

Chain Works architect Noah Demarest admitted that the project’s plans were “fuzzy at this point” and that “what we’re showing is more of a concept than a hard proposal.”

Other committee members were more eager to approve the concept. Alderperson Ellen McCollister (D-3rd) said she wanted to “stay focused on the board picture” and not do any nitpicking until the projects latter stages. Committee Chair Seph Murtagh (D-2nd) summarized the night’s actions in their simplest form.

“Basically,” he said, “what we’re saying [tonight] is that we approve the continuation of consideration of this project.”

Wednesday night’s approval for the Chain Works concept comes one month after Common Council unanimously approved an ordinance for a Planned Unit Development (PUD)—also known as a “floating overlay zone”—during its public meeting on Wednesday, July 2. Municipal Code Chapter 325, Article IV, section 325-11, entitled “Cluster Subdivision Development,” will now read as “Cluster Subdivision, Floating Zones, and Planned Unit Development Zones.” Any developer looking to use a PUD in the city will have to go through an application process. UnChained Properties, to no one’s surprise, is the first to take the plunge.

In an email to the planning committee, City of Ithaca Economic Development Planner Jennifer Kusznir defined a PUD as: “a floating overlay zone, which may be placed within the city boundaries, anywhere deemed appropriate by the Common Council. The purpose of the PUD is to encourage and allow more creative and imaginative design of land development than is possible under standard zoning district regulations. A PUD allows for flexibility in planning and design, while through the process of review, discussion and law change, ensures efficient investment in public improvements, a more suitable environment, and protection of community interest.”

One question surrounding the possibility of a PUD in Ithaca has been “Why now?” Several city officials have said that the Emerson property is an ideal candidate for a PUD. The property, which is currently owned by Emerson Power Transmission, includes three buildings totaling approximately 800,000 square feet of usable space and 93.89 acres of land. But it has been vacant since Emerson ceased operations in the facility in 2009. It is anticipated that is will soon be developed for housing, commercial, and some manufacturing on the site. Cornish noted the plans for property currently included both industrial and residential uses. The PUD was needed because the parcel is currently zoned only for the former. •