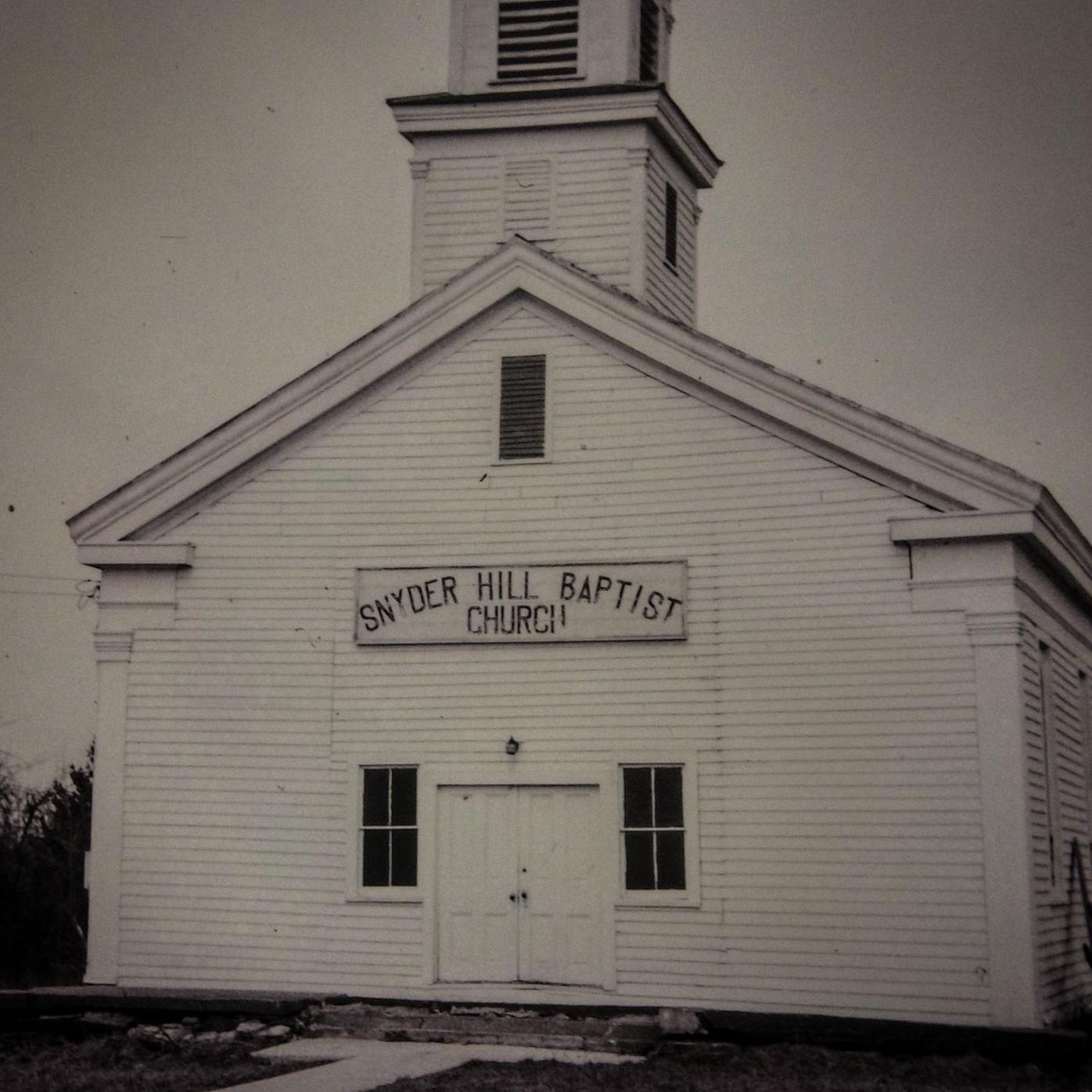 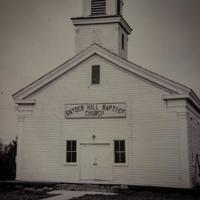 The Snyder Hill Baptist Church, in this undated photo. 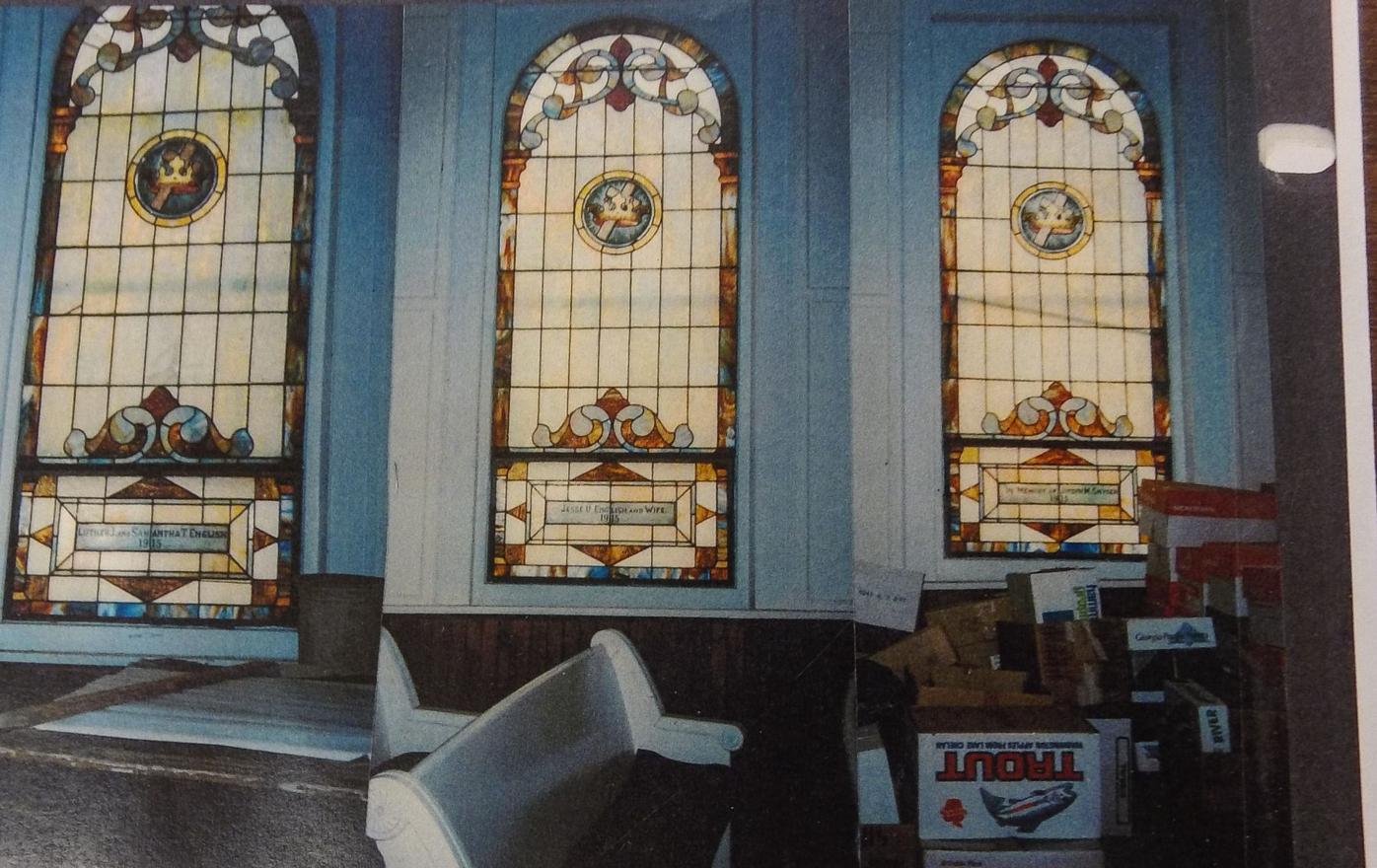 The windows of the Snyder Hill Baptist Church. 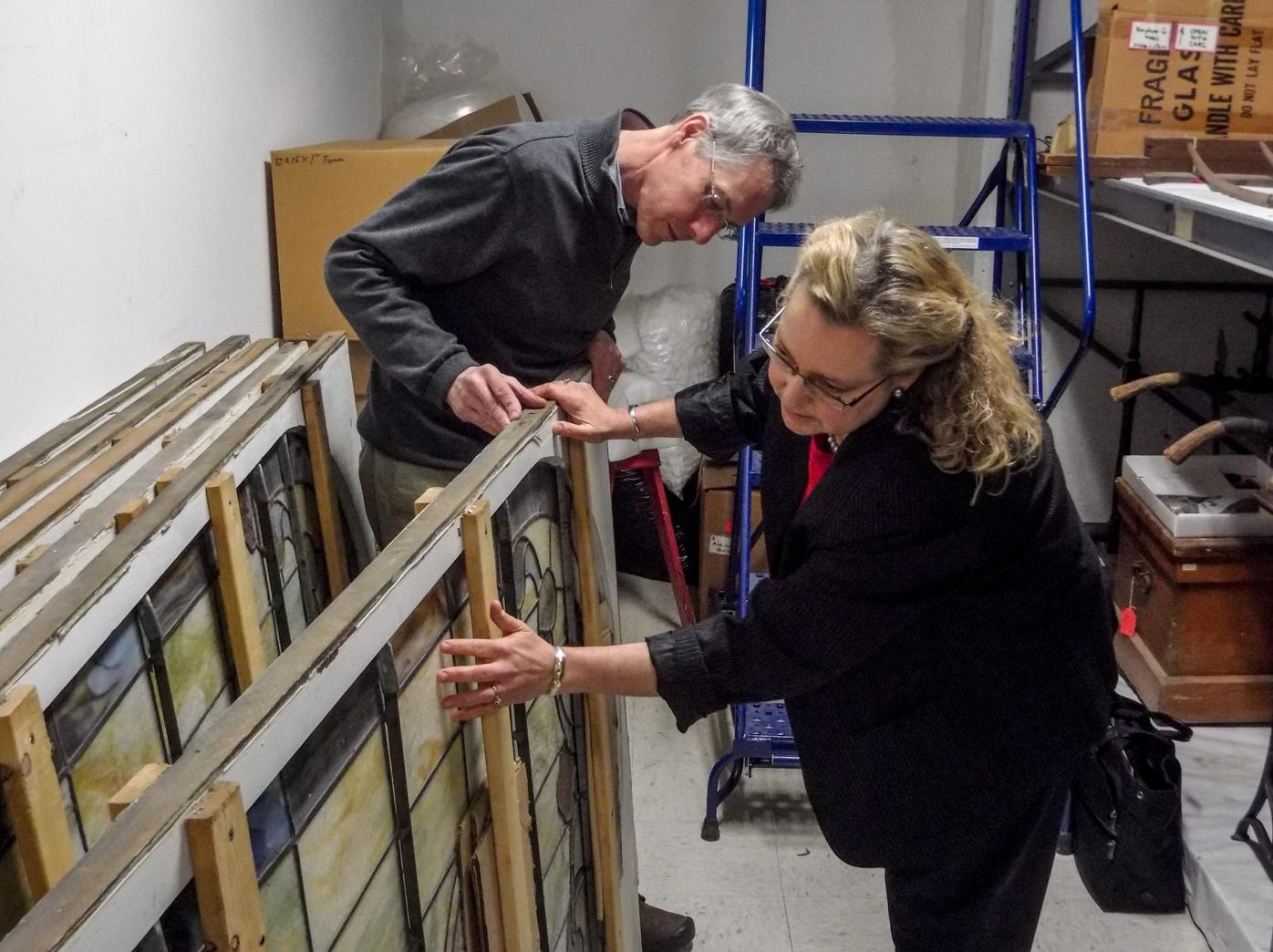 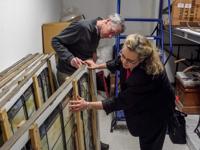 Behind lock and key (and an advanced security system) on the ground floor of the Gateway Commons building in Downtown Ithaca, dozens of mementos of a time long since past line steel shelves long since hidden from the general public.

Beneath a tarp in one corner of the room is an old church organ, in another a slatted wheelchair and, leaning up against the west wall, are several stained glass windows, crusted in dust and carefully positioned. While some of the objects in the room may seem insignificant elements (some of the antique tables and chairs, for instance, would need a practiced and informed eye to appreciate) these windows have a story going far beyond their age.

It was in the Spring of 1824 when the burgeoning community of Snyder Hill – named for Joseph Snyder, who donated much of the land on the hill for civic use – had grown to the point where they, as a sign of the strength of the community, formed their own congregation under the banner of the Free Will Baptist Church. Meeting in a modest schoolhouse at the crossings of an old Iroquois path, the church, chartered with eight signatories and Elder Edward E. Dodge as pastor, was organized April 3. The growth of a church often mirrors the maturation of a community and, as Snyder Hill grew, so did the church, eventually prompting the congregation to find a permanent home in a more modern structure across from the schoolhouse, which was completed in 1856.

It was a modest church, typical of those constructed at the time, but for the community, the new church signified a milestone, a statement of community pride: though few accounts remain outlining the church’s earliest days, those that exist paint a landscape of fond memories of a building bearing more meaning than a place to worship and break bread.

“This is where our family life was centered, and where we grew up,” wrote Jan Sears Railsback, a sixth generation resident of Snyder Hill and great, great granddaughter of Jacob and Mary Snyder. “That was the feeling of the church – we were reaching out and looking after each other.”

The church gained a large following and, by the early 20th century, as many as 150 souls might have been seen at a service of note, coming from corners of the county including Ithaca, Caroline Center, Danby and Bethel Grove. The little church had grown from a sign of community to a symbol of prestige, and as such deserved improvement and investment In 1905, a new organ was purchased and, ten years later, this small church would see a makeover that in the congregation’s eyes, provided affirmation that they had truly come unto their own.

According to minutes from the old church, on September 13, 1915 a large crowd was present for the unveiling of several stained glass windows, specially commissioned by church trustees from a glassmaker in New York City at the cost of $300 and inscribed with the names of those who gave the most to fund the venture: Snyder, Cornelius, Genung and English. Though the structure remains, these windows now locked away in a basement – beyond sparse writings on the church and its flock – remain the only testament to the origins and development of this wedge of Tompkins County.

When the windows recently went up for sale, it was only natural the community would once again take ownership of its own legacy.

An attorney by trade but amateur historian by passion, it was two years ago Beth Silverberg moved to her home on Snyder Hill Road in the Town of Dryden, on a plot within a half mile of the old Snyder Hill Baptist Church. Recently noting the windows were up for sale, Silverberg – along with a coalition of neighbors living on plots long-since abdicated by the church’s congregation – worked together to raise the money necessary to purchase the windows from the Finger Lakes Estate and Auction Company. Knowing the history of the windows, the company sold them for below market value, a sort of gesture of acknowledgement for the cultural value they carried in the community.

“The windows are really a touchstone for understanding the Ellis Hollow and Snyder Hill neighborhoods,” said Silverberg. “To me, they represent that when people come together to build an institution like a church, for example, they’re really building their community at the same time… that same impulse, to create your community and build your world the way you want it to look like, I think, is the same impulse we live within today. We’re motivated by the same urge, of people with a shared set of values coming together to create something meaningful.”

And the lesson the windows offer speak volumes of the social history of Tompkins County: while some may see them as symbolic of the community’s commitment to their beliefs and values, Silverberg sees a more valuable lesson: a lesson of community and commonality, or unifying behind a common cause in the pursuit of spurring the change they wanted to see in the world around them. Today’s world, seemingly vast and endless, was at one day no further than the next house over – making the strength of community paramount to a healthy, productive society.

“People are always building new institutions and new traditions in each community,” said Silverberg. “Looking back on the things people did 100 years ago, we can fast forward to today and examine how we’re going about building up our community. The relevance of history today is looking at how it informs our present and how it can encourage us to build institutions that will be meaningful to us in the future.”

The windows themselves are in reasonable condition, albeit in need of an artisan’s touch, but are far removed from their former glory, a condition that cast a calming, rich light over worshippers on lazy Sunday afternoons. Silverberg said that while the community has done its part, she is now looking to appeal for funds and talent to allow for a permanent place to install the windows, as well as the funds that are needed to restore them to their former luster.  The names on the windows, the same names who built many of the homes that remain on the landscape there, symbolize those in the church who gave to help beautify a place that back then, was one of the true unifiers of the community of Snyder Hill. In restoring the windows, Silverberg said she hopes to revive some of this sentiment.

“This project is really paying it forward,” she said. “These windows are our legacy, and we can add to that legacy by maintaining them, by giving them new life.”