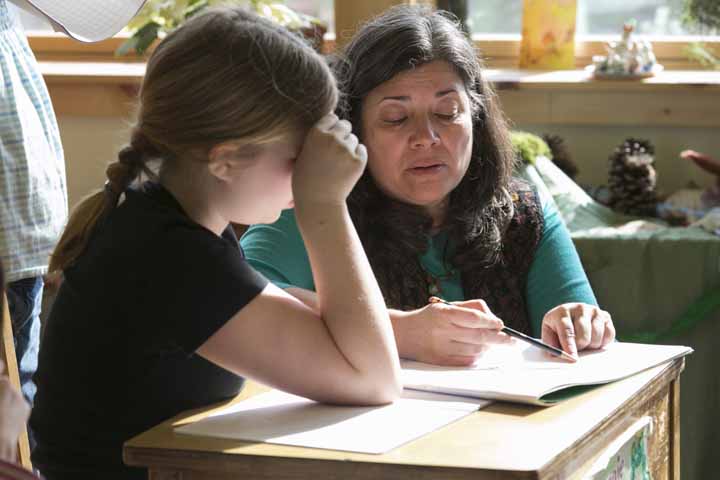 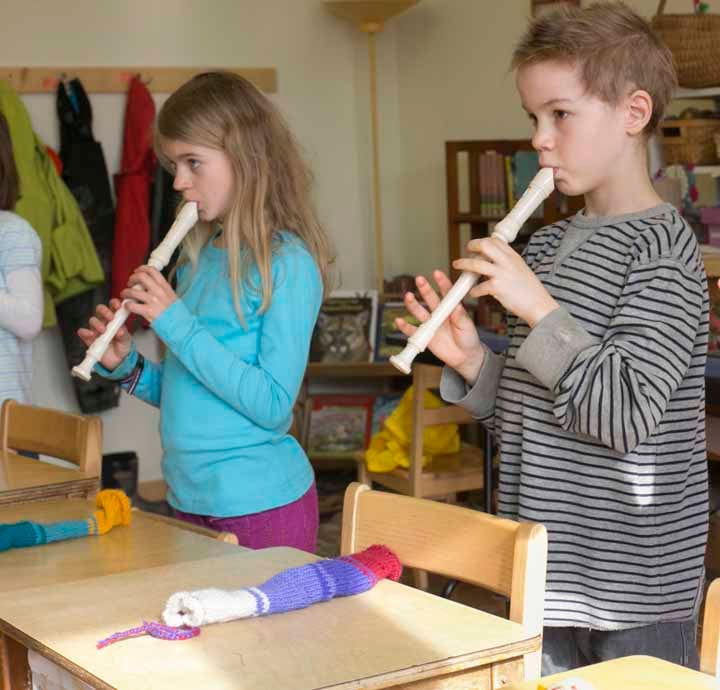 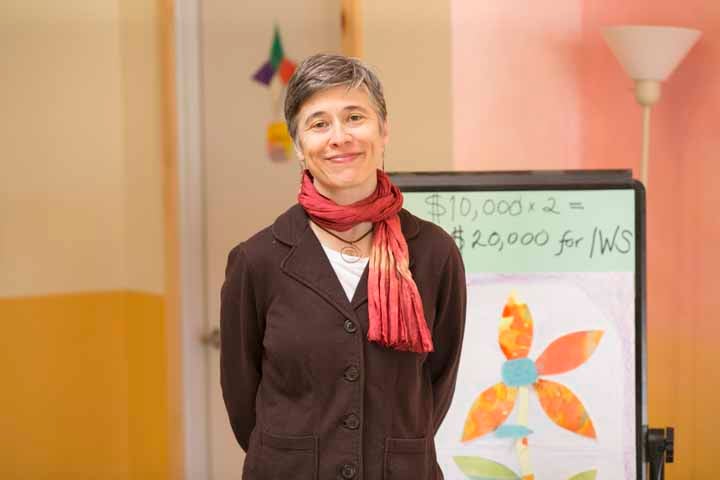 Erin Fitzgerald is director of school administration for the Ithaca Waldorf School.

Erin Fitzgerald is director of school administration for the Ithaca Waldorf School.

At first glance, Mary Ann Vaca’s classroom at the Ithaca Waldorf School appears ordinary; the teacher’s desk is at the front and students’ desks are lined up in rows facing the blackboard.

But the walls here are painted soft beige, furniture and other objects are made of wood, and natural light spills in through large windows overlooking a field. The emphasis on simple, natural materials extends to class projects as well, with geographical models made from moss, dirt and leaves on display. Students’ workbooks, meanwhile, look like artists portfolios — with colorful illustrations of maps and geometric objects — because, Vaca explained, students better retain what they learn when lessons focus on drawing as much as writing.

According to researchers, the Waldorf method helps develop important cognitive skills, fosters critical thinking, and provides the necessary skills for succeeding in an ever-changing, complex world. Keeping the classroom simple, using natural materials and incorporating art into geometry and geography lessons is only part of Waldorf’s success, Vaca explained.

“The key is developing within the child an emotional connection to the curriculum,” said Vaca, who is IWS’ third and fourth grade teacher and has taught in Waldorf schools for over a decade.

The Waldorf method — founded long before neurobiological research and education were linked — is one of few in which imagination, art, music and physical activity are incorporated into the curriculum well beyond early childhood and into grade school.

“We have high academic standards, just as any school. But the Waldorf method is designed to engender a personal, emotional connection with the curriculum by emphasizing creative expression and thereby giving students an active role in their own education,” said Erin Fitzgerald, Director of Administration, IWS. “And, our grade school students, after graduating from IWS, tend to excel academically and socially when they go on to other schools.”

Part of the “active role” students take is creating their own books.

"Students make their own main lesson books in which they write down and draw what they learn," said Claire Huyghe, IWS’ incoming first grade teacher in September. "It is a treat to watch the students devote themselves so fully to creating their books day after day. They take great pride in their work, and learn a lot from each other. When the book is finished, they have a true piece of art, and gained a lot of confidence in the process."

The problem with overloading children with too much fact-based information at a young age — according to Dr. Regalena Melrose, a clinical and school psychologist and author on child development — is that “children have little access to the underdeveloped neocortex (involved in sensory perception, motor commands, spatial reasoning, conscious thought, and language; and not fully developed until the 20s-30s). This means purely academic endeavors are potentially frustrating for students and they often resist the learning process instead of becoming joyfully engaged.”

“I remember the Waldorf lessons being so much more experiential and interdisciplinary,” said Ludi Augustine, who transferred from public school to attend IWS, and now teaches government at Ithaca High School. “The geometry we learned was connected to the mythology we studied and wrote about, which was connected to the art we created.”

Nationwide, education researchers are discovering that an interdisciplinary approach helps students better engage and retain what they learn, than when the curriculum is divided into separate disciplines. Waldorf educators have taught this way since the first school was founded in 1919.

Part of Waldorf’s interdisciplinary approach involves learning through physical movement, which has been shown to be more effective for knowledge retention than learning while sitting at a desk. Moving together also emphasizes healthy group dynamics, coordinating and connecting with fellow students.

Young students learn letters first through movement — by walking in the shape of the letter — before they practice the letter’s lines and curves through brush strokes.

“In the grades we do a lot of warm up and movement, we incorporate all of the senses, we sing, recite poetry. When I introduce cross stitch, the class practices the motion with the whole body first, then with their hands,” said Lisa Marshall, IWS handwork instructor.

Along with movement, music is incorporated into lessons in early childhood through singing. First grade Waldorf students learn to play the pentatonic flute, as well as develop music listening skills. By fourth grade they learn the diatonic recorder and string instruments, begin singing in choir and playing ensembles together.

“We introduce all four processes of math at the same time in first grade, through rhythmic poems and verses about numbers, counting by ones, by twos counting by threes. We clap the rhythm; jump the rhythm, to involve the whole body, which helps children fully conceptualize the lesson,” said Vaca.

“We are always moving while doing math and save the book work until after the students have learned the lesson with their whole bodies, then it goes in the books,” said Vaca.

Liz Hess, whose daughter and son graduated from IWS, and went on to public school, said the transition from one system to another went better than she expected, especially in math.

“In math, my children were way above average, beyond where the other sixth graders were. I get from both of their teachers that they have great deductive reasoning skills, they are a pleasure to have in class, they think outside the box. My son’s teacher (at Boynton) said if she had it to do over again she would have sent her own kids to Waldorf,” said Hess.

“What Waldorf educators do successfully is involve and nourish the sensing, feeling parts of the brain, those easily accessed by young children, so that essential foundational neural connections needed for later academic learning are solidly laid,” said Melrose.

Handwork, a core part of Waldorf education, is very deliberately introduced through the senses, according to Marshall.

“In first grade, I don’t talk about the wool, but present it in a basket with a silk cover, as if it is gold. Children sense that it’s very special,” she said. “We always start from a feeling experience and after the child has the information in their heart, then we bring it to their head in an intellectual way.” Marshall studied earth science at Dartmouth College and is a former science teacher.

Though handwork develops the same neuropathways that lead to understanding math and other complex cognitive functions, Marshall was quick to point out that this is not the underlying purpose of why it is taught in Waldorf.

“Handwork has many benefits. One is a development of children’s aesthetic sensibility of color and form. Another is central to all of Waldorf education: the ability to create inner pictures about something that doesn’t yet exist and bring it to life, which is the same skill that an engineer or architect needs,” said Marshall.

The idea of children knitting together as opposed to tapping on a computer may seem old-fashioned by today’s classroom standards. Dr. Frank R. Wilson — a neurologist and author of The Hand: How Its Use Shapes the Brain, Language, and Human Culture — cautions that replacing the essential physical experience of hands-on learning with computers is detrimental to child development and hampers the learning process.

“The hand is a learning machine that can’t be replaced by the computer. Knowledge is acquired through the whole body — by being outside, using the imagination — and you can’t separate what’s in the mind from what is in the body,” according to Wilson.

Computers are not introduced in most Waldorf classrooms until eighth grade, when students take apart and rebuild a computer to figure out how it works.

“We are not against technology, but we feel that young children who are deprived of hands-on experiences in favor of a flat screen have a less meaningful learning experience,” said Marshall.

Silicon Valley executives with school children agree. Many send their children to Waldorf Schools in part because they believe, “computers and schools don’t mix,” according to the New York Times article, “A Silicon Valley School That Doesn’t Compute.”

“A more mainstream curriculum might divide what they want students to know by 12th grade into 12 parts and teach that way. At Waldorf we look at, ‘who is the human being at 7? And at 14? And what are the emotional and intellectual needs and how do you meet those appropriately?’ In the end both of those 12th graders may have acquired the same information, but the Waldorf child will graduate with critical thinking skills, social and emotional intelligence, and a lifelong passion for learning that is unique to the Waldorf environment,” said Marshall.