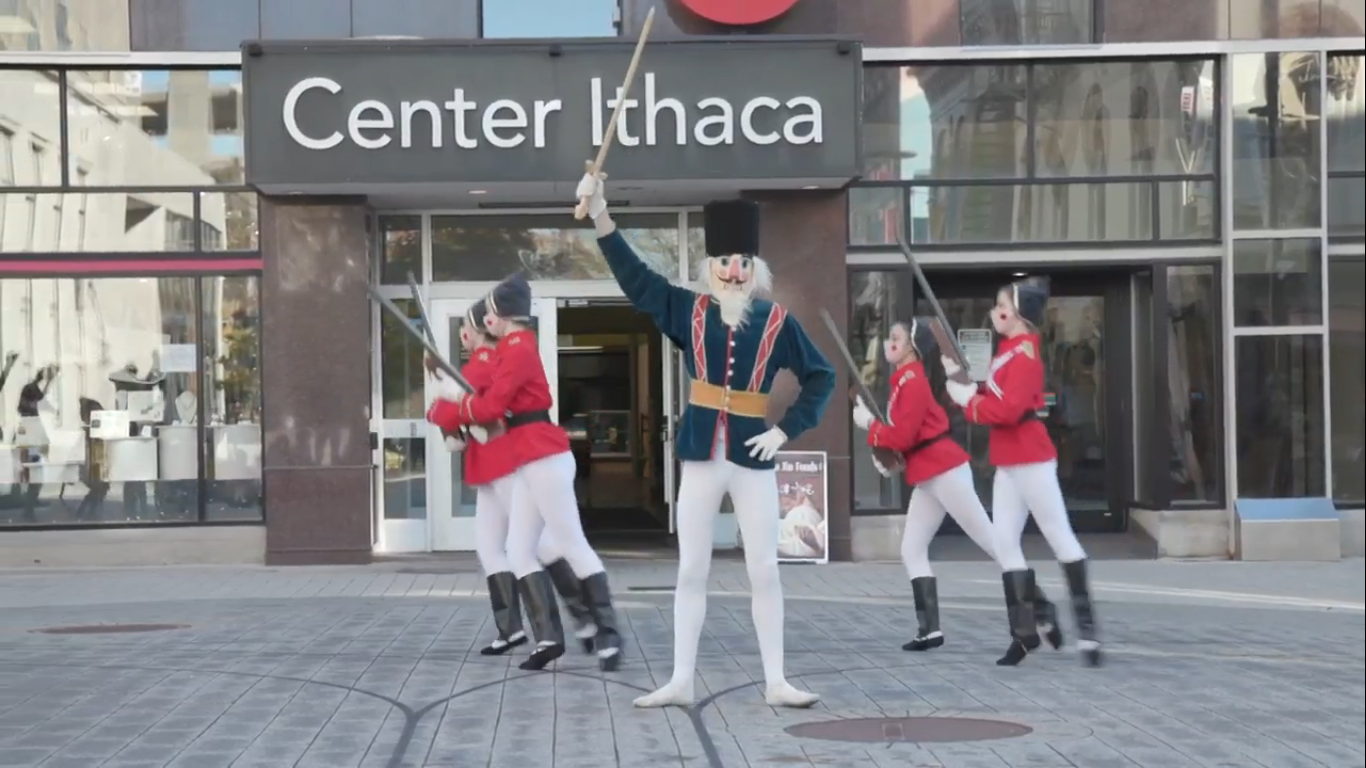 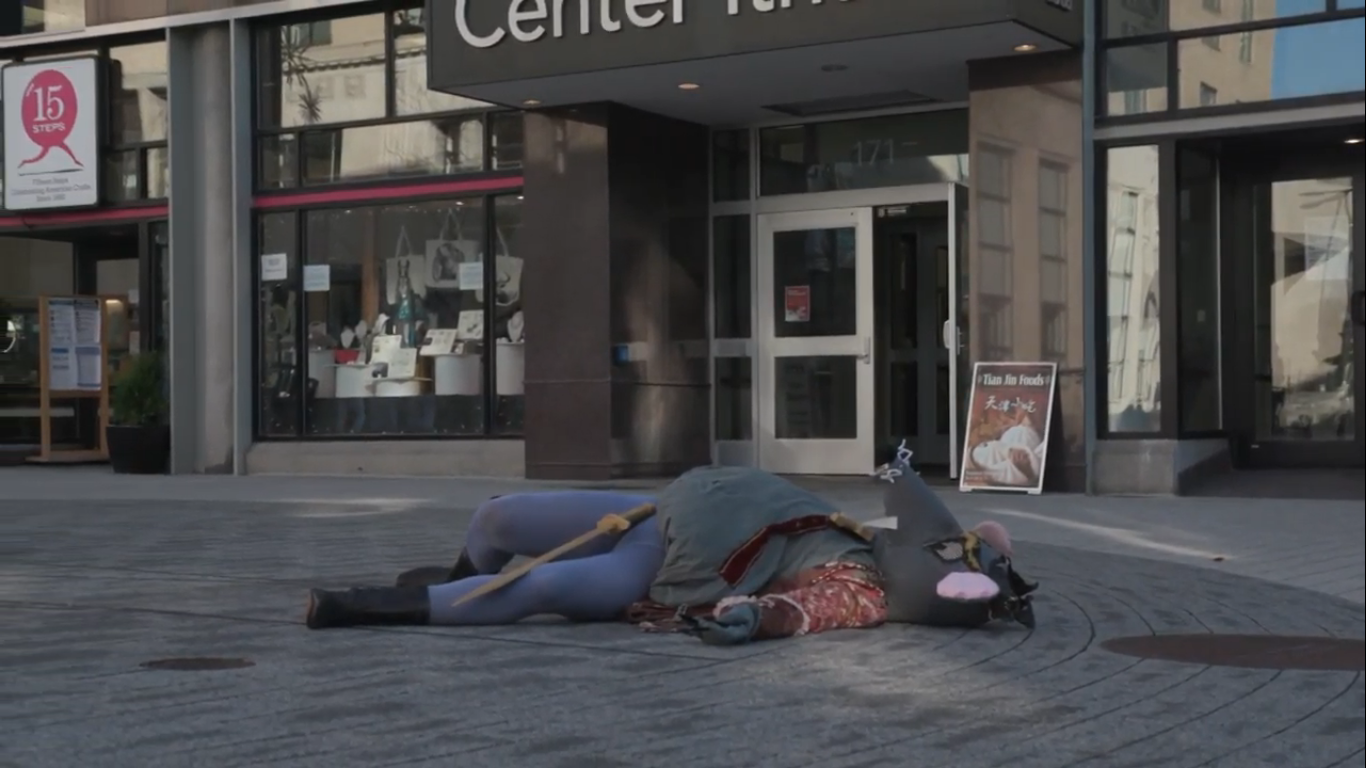 Mouse King down on the Commons. 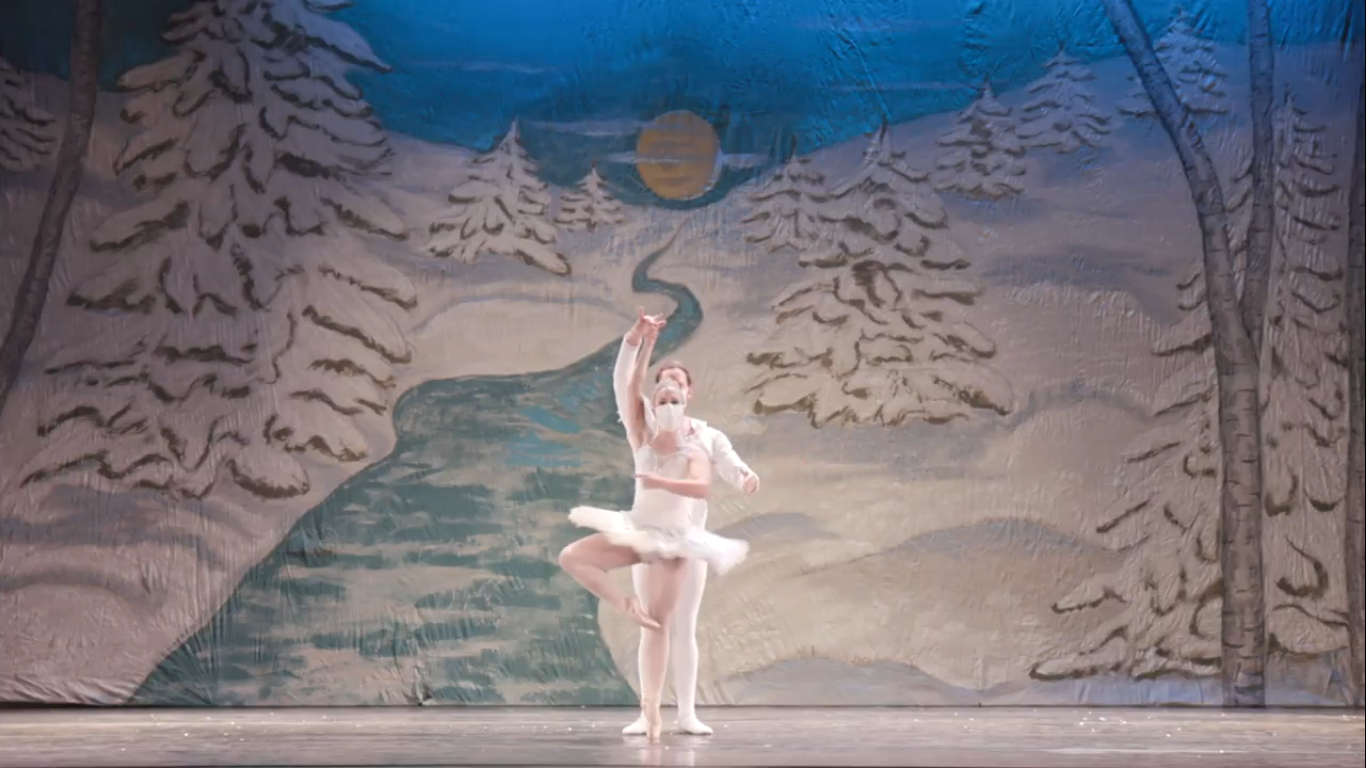 ITHACA, NY -- “The Nutcracker” is one of, if not the single most, performed ballets in the modern era. A holiday classic, the sweet swell of strings of Pyotr Ilyich Tchaikovsky’s music is everywhere this time of year. But with the COVID-19 pandemic putting the damper on a live performances, many ballet schools couldn’t go ahead with their usual winter performance. But the Ithaca Ballet made it work using an innovative combination of local sets, stage performance and green screens.

It would have been easy for the school to just throw up a camera on a tripod in the State Theatre while the dancers performed on stage, but they really went the extra mile to make this year’s “The Nutcracker,” called “Cyber Nuts,” feel like its own entity.

The performance was pre-recorded and then streamed on YouTube for those with tickets. The show opens with the party scene, where friends and family descend upon Clara’s (danced by Maria Sun) home for a Christmas party. This scene was filmed at the Treman Center, where natural light streamed in the window as partygoers danced together, opened presents and watched Drosselmeyer’s (danced by Kevin Olmsted) magical dolls take the floor. It’s at this party that Clara is gifted her nutcracker doll, though an ensuing fight with her brother Fitz sees the head ripped off the rest of the doll.

Drosselmeyer again comes to the rescue, repairing the doll and hinting at the magic to come. The party winds down and Clara heads to bed, and when the next scene begins, we’re treated with views of downtown Ithaca. Clara shrinks down to the size of the toys, and before you know it, you’re watching Clara, the Nutcracker and toy soldiers battle mice and the Mouse King in front of Center Ithaca. There was something whimsical about the random passerby in the background stopping to watch the dancers perform.

I have to mention here that all the dancers were wearing face masks, and that they were perfectly coordinated to their costumes. In the party scene the girls’ masks matched their dresses, and even more adorably, the toy soldiers’ masks matched their skin color and had rosy red cheeks painted on them to enhance that doll-like look. It was the perfect way to incorporate 2020’s bizarre new normal into the show, and proved to be an enhancement rather than a distraction.

Eventually the Nutcracker, Clara and the toy soldiers defeat the Mouse King, and leave him lying dead on his back directly in front of Center Ithaca. When the show moves on to the snow scene, the dancers are on stage at the State Theatre, where artificial snow falls gently throughout the scene — a staple of the show.

The videography is something that stood out from the beginning, but here is where you really notice it as something unexpected. The unconventional locations of the party and combat scenes lend themselves to a more creative approach when it comes to filming, but to see the same creativity in scenes that are being danced on stage was great. Instead of just a wide shot of the stage from halfway back in the audience, there were close-ups and different angles and pans across the stage — it really made it feels professional and special.

Clara and the Nutcracker venture their way through the Land of Sweets, all of which took place on stage. Again, the videography prevented it from becoming stale, and a couple of green screens sprinkled in added to the fun. The marzipan scene used a green screen to show the dancers in a pasture, and the sheep dancing in the background were a great touch.

Much of the remaining adventure through the Land of Sweets was performed traditionally on stage, though the Waltz of the Flowers had a green screen of a rose garden. After the pas de deux with the Sugar Plum Fairy (danced by Maria Valencia), came the epilogue. Clara is brought back to bed, and you’re left wondering whether it was all just a dream.

The show was beautifully choreographed and the dancers were all talented and professional. I’m impressed with the way Ithaca Ballet managed to take a classic like “The Nutcracker” and add modern-day elements and creative twists using technology to turn it into something that felt familiar but still totally different for the COVID-era.