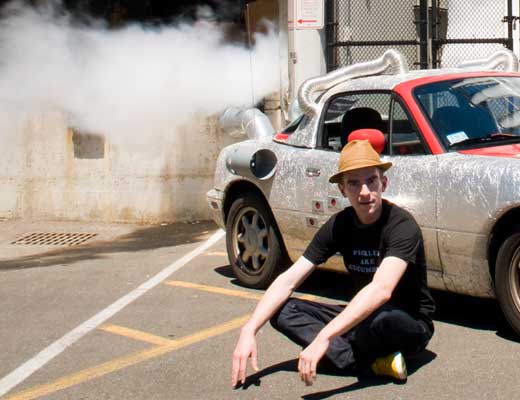 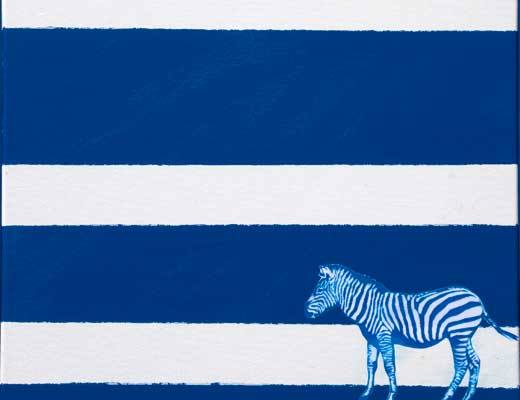 If you've been around Ithaca for awhile, you've probably noticed a small car covered with tinfoil and other silvery objects driving around town. It's the Spaceship Car, created by local artist Ryan McGuire in one of his many experiments designed to engage with the public.

"The Ryan McGuire Art Show," on display at The Shop (312 E. Seneca St.) through July, is another.

"I've always been an abstract artist," McGuire said in a recent interview. "I took classes all through high school through college, thought I never actually finished college. I've been doing creative abstracts for a long time."

Once he landed the show at the Shop, he spent the next few weeks "creating art, getting bigger and bolder and expanding some of the insanity of what I do," he said. "I like to call it 'The people's art," because it's easy to take in. It doesn't require an art degree or lots of thought, but it's fun to engage with."

McGuire describes the mixed-media works as pop with a 3D elements. "All of my art pieces are on canvas, with lots of bright primary colors-Andy Warhol has been a big role model for me-and I always incorporate a 3D component," he said. "For example, 'Corporate Swine' has bright, bold lines, but the pigs are three-dimensional.

"I also use a lot of old magazines for collage work," he continued. "I call it 'clean collage,' because I'm very detail oriented, so I use the paint and mix it into the magazine articles. It makes it more engaging and easier to take in, I guess, because you see common elements mixed with art and it makes this kind of picture."

The art show spotlights just one aspect of McGuire's eclectic creativity. He always wears bells around his ankle, carries a harmonica, and buys as many instruments as can (as long as they cost less than $50) in the hope of finding something that he's naturally talented at. He also has done stand-up comedy, acted in a Ithaca College student-produced film, and produced a lot of photography. He also roasts his own coffee, makes his own hot sauce and deejays on WVBR.

He added: "Everything I look at, if I have a thought I need to act on it. I'm an anti-procrastinator. I have a lot of fun doing it. I'm not trying to take over the world, but I'm trying to engage as many people as I possibly can. That's what I do with the bells and the car."

The spaceship car is actually McGuire's third. "The first one was 1984 RX7, completely rusted out, so the cheapest way to make it look good was to cover it in tinfoil," he explained. "That car died pretty quickly, so I moved on to an Eclipse. Then I finally got the Miata on eBay, which I bought on a whim.

"It turned out to be pretty good, it drives great and is the perfect kind of canvas," he continued. "A couple of weeks ago, I took all the stuff off the bumper and redid it with different rockets. It's something you can always work on. If someone scratches it I just cover it in tinfoil. I took a top-gear stick shift from an airplane and it's my shifter; I have speakers hooked up that play sound effects and countdowns."

And it's all legal, according to McGuire. "I don't do things that are too crazy," he said. "Everything I put on to the car has been steel-riveted; I've made it so it can be driven on the road without anything falling off. I test everything before I drive it. I take safety to an extreme because I'm a very cautious person. But it follows NYS laws and passes inspection. And since it's such a small car, the objects on the side don't stick out further than a normal car."

He see himself as following in a long line of those who customize their cars. "I've kind of taken the art car to a different level. Most art car artists create them for parades, slow driving and parking, but I've made mine as a daily driver. I think people are taken aback by it, too; I take this everywhere, it's my car."