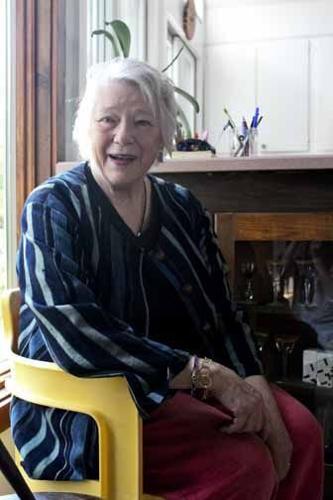 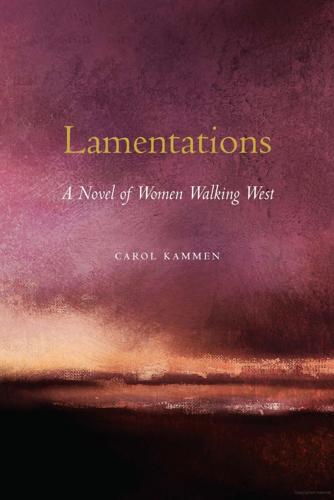 On May 16, 1842, the first organized wagon train on what was to become known as the Oregon Trail set out from Elm Grove, Missouri for the Oregon Territory.  With fewer than 20 wagons, and somewhat more than 100 travelers, they were leaving the United States and all of its institutions behind them and venturing out into two thousand miles of what they thought of as wilderness to a place where it was hoped that land and opportunity would provide a new beginning.  They made twelve miles the first day, a pretty good start.  Once thought of as the Great American Story, the journey is still a remarkable chapter in American history, most often imagined or recounted through the eyes of men.  Carol Kammen, in her book Lamentations: A Novel of Women Walking West,  tells the tale from the perspective of the women on the trip.

There are myriad local connections in connection with the expedition.  Dr. Elijah White, the nominal organizer of the venture, lived in Lansing.  (His wife Serepta, stayed behind in Tompkins County.)   Medorem Crawford, the company’s clerk, was a young man from Montour Falls (then called “Havana”).  The mission established in the Oregon Territory by Marcus Whitman, which the 1842 group would reach in September, had launched from the Ithaca Presbyterian church on DeWitt Park six years earlier.

The novel is structured chronologically, chapters most often starting with the actual diary entry of Medorem Crawford which was generally a laconic recounting of the weather and distance traveled.  Within that framework tracing the daily progress of the group, the stories are told in the distinct voices of a half dozen women of decidedly different backgrounds and personalities.  There’s 12-year-old Ellen, who befriends Mrs. Smith, the oldest woman in the company as they bond over their shared love of nature.  There’s also Mrs. Shadden and her family, leaving behind a hard-luck life and not expecting much better at the end of the trip, and the Widow Abel, recovering from the unexpected suicide of her husband.

There are encounters with Native Americans, sudden disasters, and mounting fatigue.  There’s no escaping the exhaustion of the people and animals as the weeks drag on and the way gets relentlessly harder.  As might be expected in a story about walking across the Great Plains and through the mountains, the land and the weather are as much characters in the book as the people.

The trail they followed in 1842 was not the well-worn route of later years, and the pioneers lost it on occasion.  Up to that point it had been a series of paths used by trappers, hunters and explorers.  They pooled their resources and put themselves in the hands of a guide for $500, no mean sum in 1842.

Those pioneers in that year were the first trickle of what would very soon be a tidal wave of migration.  Though the term ‘Manifest Destiny’ wouldn’t be coined until 1845, American expansionism was in the air.  It was still a matter of dispute whose territory Oregon even was, with the British and Americans both making a claim, and there was every incentive to bring American settlers to the territory.

The very next year, 1000 settlers would make the trip, and every year in the next two decades, thousands more would follow.  There are still places where the ruts worn into the ground by the wagon wheels are visible.  It was so incredibly arduous that it came to be called the nation’s longest graveyard.  Of the approximately 300,000 who started the journey, somewhere around 10% died on the way due to disease, accidents or weather, an average of one body every tenth of a mile.  To be on the trip meant your world was focused on finding water and grass for your animals, minding your shoes, enduring cold at night, rain, heat during the day, and endless clouds of dust.

We forget, or perhaps it is just too hard to imagine, just how extraordinary such a trip was.  In addition to the issues of weather, topography and disease, what Kammen’s novel captures superbly is the sense of how truly isolated the company of travelers was.  They were in every sense on their own.  There was no higher authority that could be appealed to in the event of a dispute or an emergency.  As in any group of disparate travelers most of whom only got to know each other while traveling, there was jealousy, suspicion, and political maneuvering.  The “constitution” that the group drew up at the outset soon became meaningless.  There was a feud between Dr. White and ‘Captain’ Lansford Hastings, the two men vying for leadership of the excursion, that resulted in the party breaking up into factions.  By the end of the journey, the company had lost cohesion and trickled in to the Oregon Territory, their wagons and most of their belongings abandoned along the way.

Historically, the fortitude and determination required to make such a journey has been examined without paying much attention to the environmental degradation or the displacement of the indigenous population attendant to the settlement of the American West.  Kammen is clear-eyed about the fact that the pioneer wagons are traversing lands that are already occupied.  At that early stage in the migration of American settlers, there is still a good deal of curiosity on both sides.  The women are intrigued, for example, by the unself-conscious nudity of the Sioux men, which would certainly have been a novelty to women in 1842.  Nor does she shy away from the pioneers’ casual shooting of the bison they encounter, though the industrial-scale slaughter of the herds had barely begun at that point.  (That being said, the November 9, 1842 Ithaca Journal and Advertiser contains an ad inviting customers to George Hennings’ store across from the Ithaca Hotel, declaring that they were in recent receipt of “bales” of buffalo robes.)

Carol Kammen has been the Tompkins County historian since 2000, and has taught history at Tompkins Cortland Community College and Cornell University for many years.  While Lamentations is essentially a work of fiction, it is obvious throughout that it is fiction informed by deep knowledge of the time and place of the story.  The people are real, and the events happened, but the only accounts of the trip are those of the men.  In creating the voices and personalities of the women, who were most often on the periphery of decision-making in the fifth decade of the 19th century, Kammen has the freedom to create vivid characters that ring true to the time.  It’s the work of a mature mind, with a lifetime of experience, steeped in decades of historical research.

There is an enduring myth in America that pioneers were a breed of rugged individualists.  That idea informs how we think of ourselves – as spiritual descendants of self-sufficient settlers, requiring help from nobody.  Lamentations drives home the fact that the opposite was true.  Every individual in the group depends for survival on the assistance and presence of the other members.  This was as true on the frontier as it was in a group of travelers navigating the crossing of a continent.

As daunting as it was to be the first, there could be benefits to getting there ahead of everyone else. Medorem Crawford went on to serve in the Oregon legislature and was a Lincoln appointee. The Widow Abel married a fellow traveler from the wagon train two weeks after arriving in the Oregon Territory.  The Shaddens farmed and raised stock.  Still others were unimpressed with Oregon, though, and went on to California.

Last May, in driving across the country with my daughter, we crossed Nevada on Interstate 80, which follows the Platte River portion of the Oregon Trail.  We didn’t worry about quicksand, dust, or finding river crossings, and with the speed limit being 75 mph, we covered what would have taken the pioneers a week of hard walking in less than one hour, all while listening to cowboy music and sipping from water bottles in air-conditioned comfort.  The Platte still looks, in places, much like it would have in 1842, and given its mythic status in the story of westward settlement, it’s frankly a little underwhelming as a waterway.  I wish we’d had an audiobook of Lamentations to listen to while we were driving; it would have made the route come alive