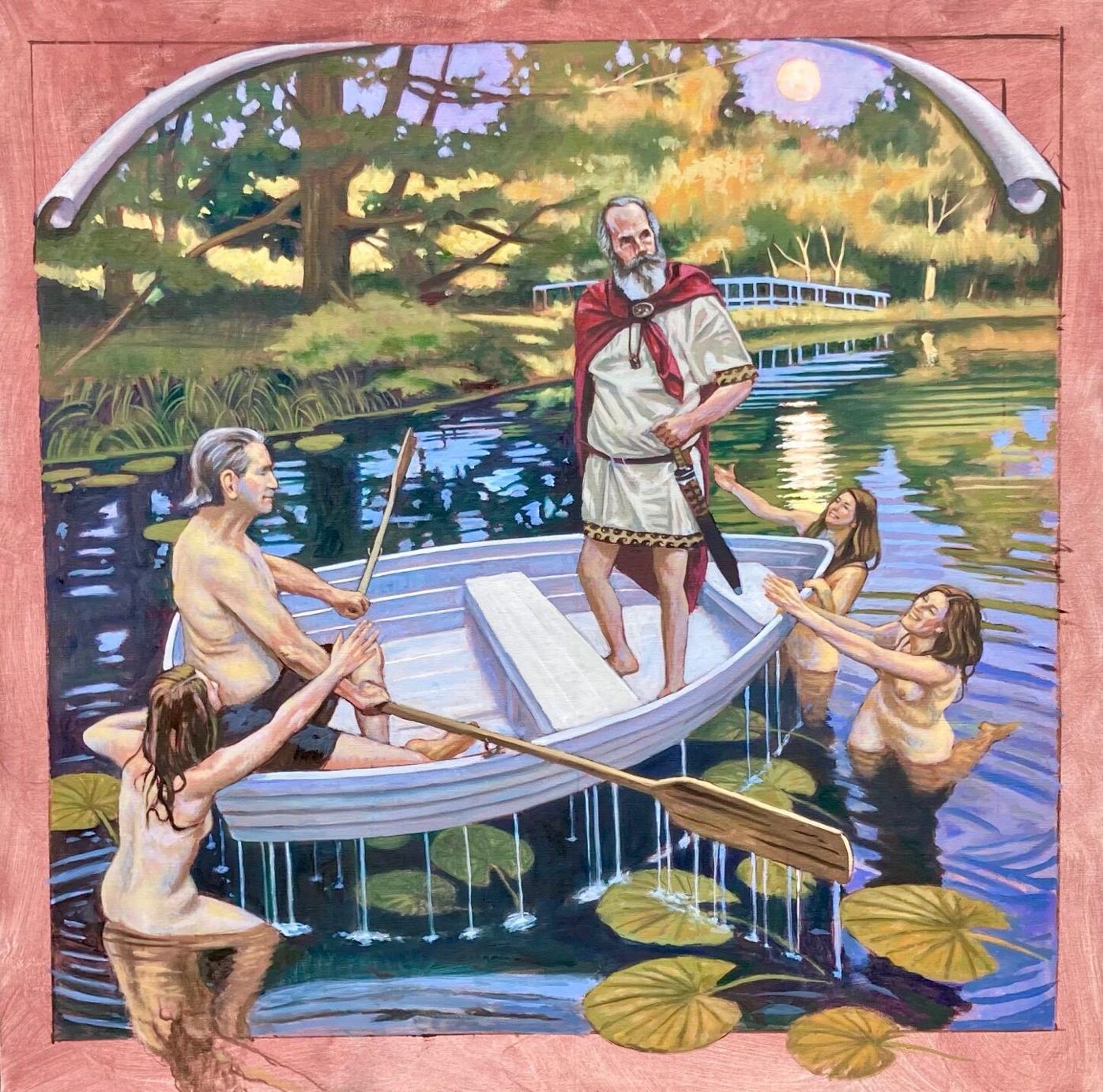 Ulysses and the Incredible Levitating Rowboat by Brian Keeler 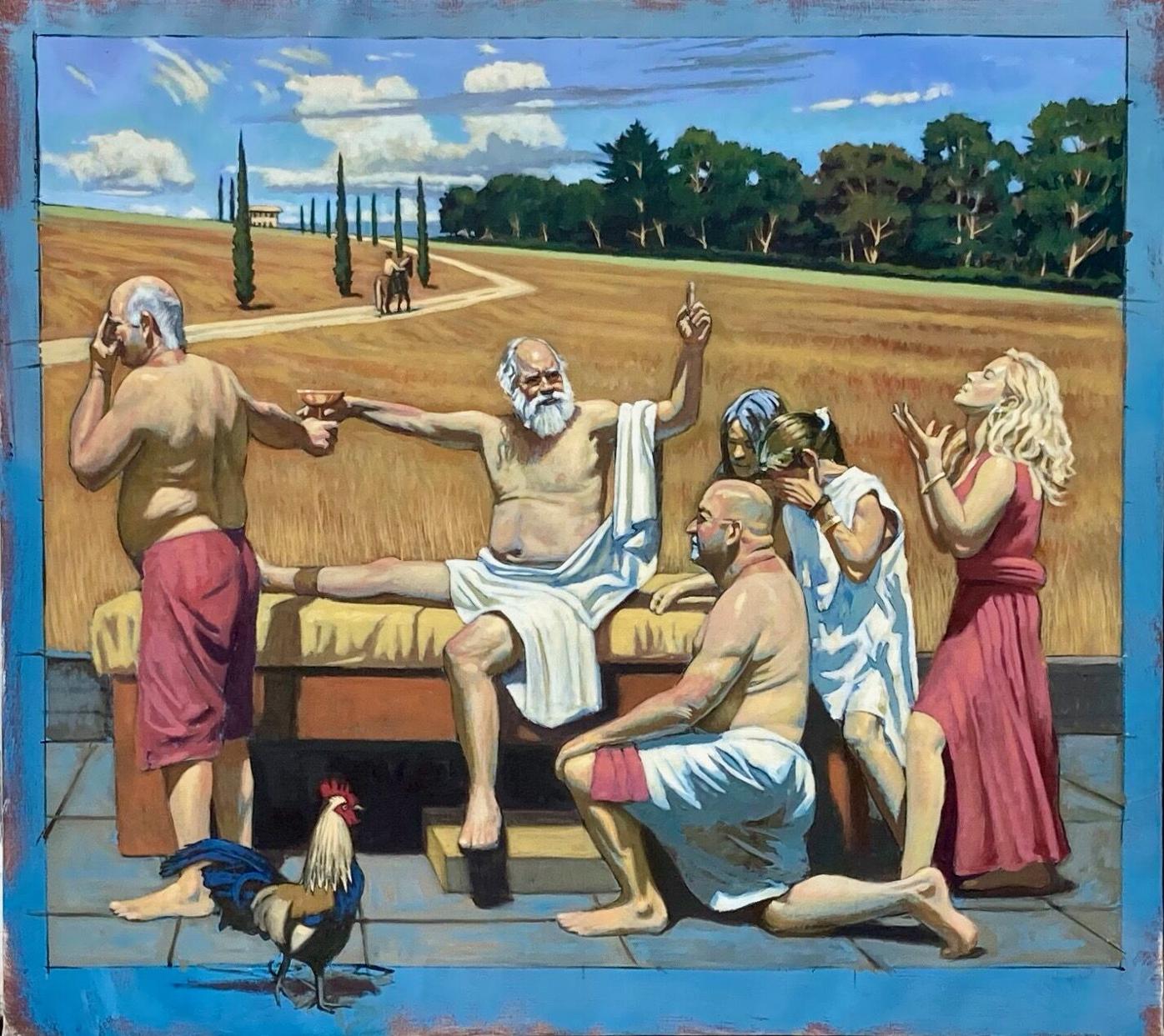 The Hemlock Cup by Brian Keeler 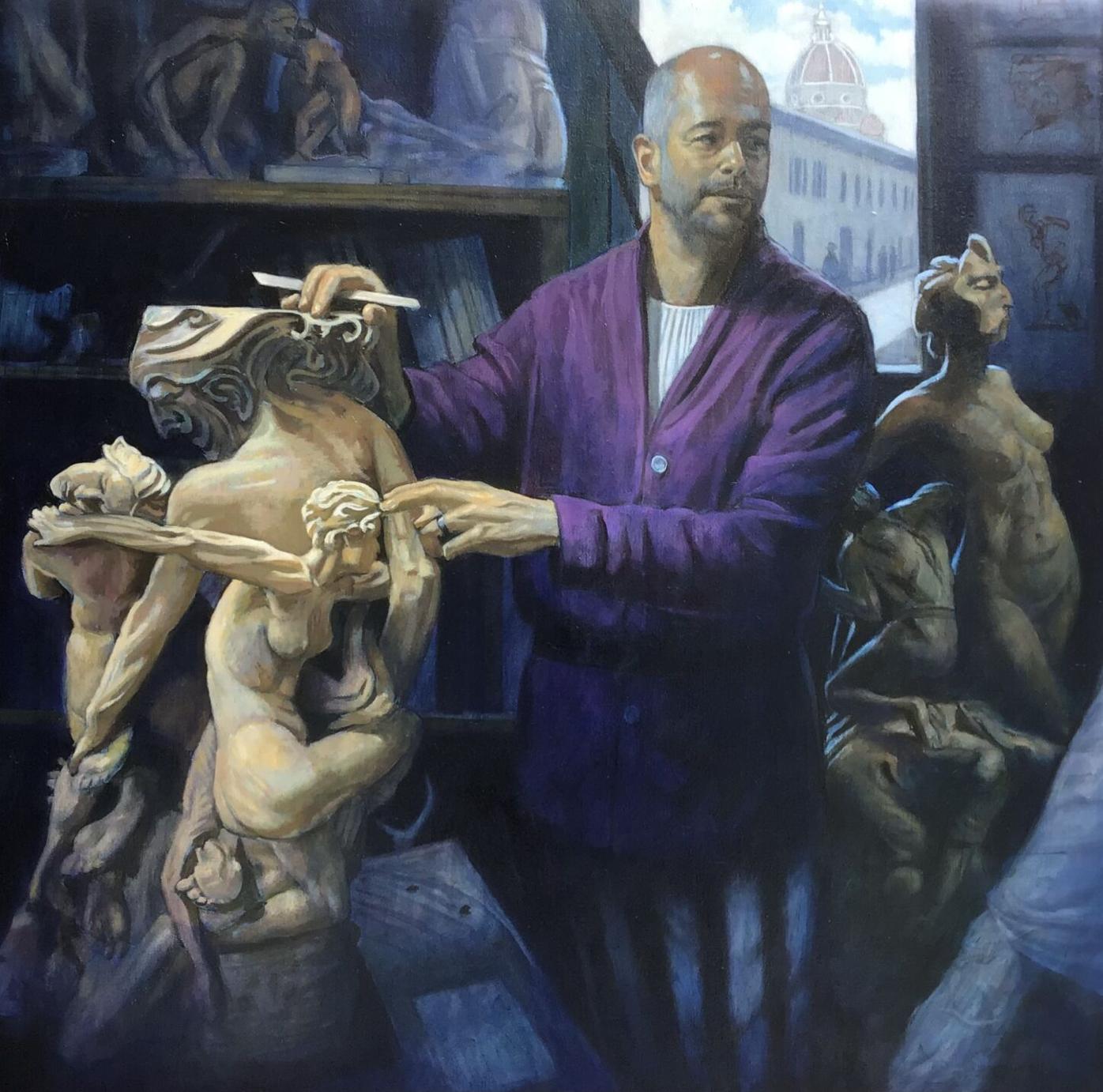 The Sculptor and the Sculpted by Brian Keeler

Characters, events, retrospectives shall be

shall be convey’d, Death, the future, the

invisible faith, shall all be convey’d.

Hey, everybody. I’m back.

I wrote for the Ithaca Times for about 15 years (mostly in the arts area), doing roughly an article a week. Then retired in 2018.

Now I’ve been doing about an article a year.

Why? Because every once in a while, I discover an artist who is such a genius, I think people simply must pay attention. Thus: Brian Keeler.

One of the things I have written before is that Ithaca, N.Y., for such a small city, has a crazily outsized art scene.

And we have some world-class artists here. In the music realm, I think of the sublime Hank Roberts or the wonderful Judy Hyman of the Horseflies.

In the area of theatre, I think of the Ithaca Shakespeare Company.

In the visual arts, I have referred to Alice Muhlback as the Picasso of Ithaca, Carlton Manzano as our Upstate Monet, and the Ithaca cartoonist and painter Jim Garmhausen as Robert Crumb and Robert Williams rolled into one.

Which brings us back to the Ithaca-based painter Brian Keeler. I think of Brian Keeler as a Renaissance master. (He can also switch gears and paint like an impressionist master or a fauvist master, but we won’t even get into that.)

And Keeler has a new show, Modern Mythological Manifestations: From Titian to Keeler, at his North Star Gallery, here in the greater Ithaca area, running through November and December 2021.

Brian picked me up and drove me out to his studio on a beautiful, overcast day in early October. The studio is in the country, east of Ithaca, located in a magnificent Italianate Victorian home that was built in 1865. (I was trying to wrap my mind around the idea that this house was constructed in the final year of the American Civil War.) Normally, when I visit a gallery, I hang around and take notes.

But to my surprise, Brian had a whole presentation ready to go. His significant other, Linda Graves, filmed us with a smartphone (for a YouTube video for God’s sake) as Brian wandered through his studio and lectured (rather comprehensively and brilliantly) on the paintings. (I managed to interrupt occasionally and babble a bit…hopefully giving the final video a more conversational feel.)

Incidentally, the paintings were all mind-boggling.

There is an incredible volume of masterful work to be seen here, people. But let’s consider a handful of paintings…the ones I found most compelling…hopefully giving the Art-Loving Reader a taste of the show.

The material breaks down into three rough categories: The mythological or allegorical paintings, paintings involving the works of the upstate New York sculptor John Belardo, and landscapes.

We see Socrates, on a bench, gesturing to his grieving students, just before he drinks the cup of hemlock (forced upon him by the idiot Athenian authorities).

Keeler takes a somewhat surrealist approach. And, rather than being set in a stone prison, as in David’s masterpiece, Keeler sets the scene in a sunny Tuscan landscape with burnished fields, cypress trees lining a stylized, zigzagging road with a distant horse and rider on it, a stretch of forest, and monumental cumulus clouds in an azure Italian sky.

Something Keeler does that I really admire is he altered the age of the grieving students. In David’s masterpiece, the students are largely young people. In Keeler’s work, he chose middle-aged models. The result is that he finds a compelling beauty in the middle-aged human form.

Another, odd, lively, near-surrealist touch is Keeler plants a colorful rooster in the foreground of the painting. (I think of that rooster in the opening shot of Orson Welles’ Citizen Kane.) This comes from the traditional story that Socrates’ last words were a request to repay the god Asclepius (the god of medicine) a rooster that he owed him.

Another of the new mythological paintings is “Ulysses and the Incredible Levitating Rowboat.” Here, we see Ulysses (aka Odysseus) standing in a commanding fashion in a rowboat…floating in the air over a pond. A sailor, sitting in the stern and rowing backward, is rowing the rowboat. Water drips from the boat in a stylized fashion that evokes surrealism. And nude water nymphs emerge from the pond, imploring Ulysses like the Sirens.

The pond has enormous water lilies and a distant, Japanese-inspired bridge that evokes Monet’s famous water lily paintings. And there is an autumnal, moonlit, upstate New York forest in the background. The painting is rendered in an academic realism-neo-classical style…but the effect is both surreal and charmingly humorous.

Brian also showed me some of the studies for these paintings. And they are as spectacular as the final paintings. There is a “Study of Socrates” and a “Study of Ulysses,” both rendered in red chalk and white pastel on tinted paper in the fashion of the drawings of the Renaissance masters. Both are beautiful and engaging realistic studies.

The next category of paintings involves a response to the work of an upstate New York artist named John Belardo. Belardo is a sculptor, working in Pine Planes, N.Y., a small town in the Hudson Valley, east of Kingston, near the Massachusetts border.

Keeler writes in an essay on his North Star Studio website: “I became acquainted with John first through his involvement with the Hudson Valley Art League, as he served as president of that organization from 2009 to 2016. I was in one of that organization’s shows held at the Salmagundi Club in New York City. Eventually, I became Facebook friends with John and was wowed by the incredible virtuosity expressed by his multiple figure ensembles. To me, there was nothing else quite like them in the entire history of art.”

Keeler visited Belardo’s studio in April of this year, resulting in a remarkable series of drawings and paintings of Belardo at work on his sculptures. The works reimagine Belardo as a sculptor working in 15th century Florence. This is because they are meant to be illustrations for a novel that Keeler is developing.

This is from a website essay where Keeler writes about the project: “I have a novel in mind about Renaissance Italy where the lead character is in the workshop of Verrochio, the sculptor and painter in Florence in the mid-quatrocento. The concept and inspiration of the novel is to view anew this workshop with Verrochio’s students, Leonardo, Perugino, Botticelli, Lorenzo di Credi and others. As I plan to illustrate the work, I needed a sculptor whose work is connected to this august tradition and has similar themes of ancient myth and Biblical narrative. John’s work was a perfect fit.”

The final category of paintings in the show consists of landscapes. Keeler is an extraordinary landscape painter. (His work is so masterful it is a little disorienting.)

There are a vast variety of works…vistas of upstate New York, Pennsylvania, Maine, Italy, Ireland, and France. (Another thing Keeler does that I adore — even when painting traditional mythological themes, he will often set the action in landscapes that are clearly American east coast landscapes… which gives the work an inherent surrealist feel.)

The paintings are realistic, sometimes a bit impressionistic, and often the color is overloaded — “hopped-up hyper-reality” is how I characterized it when I first wrote about Keeler a decade ago. (And Brian, at the time, told me that critics compared him to the early 20th century fauvist movement, whose adherents painted landscapes with “trumped-up” or “arbitrary” color.)

Indeed, one of the most extraordinary things in Keeler’s paintings is his use of light. Light seems to glow off his canvases as if the viewer were actually standing at the location in the real world. (When I wrote an article about Keeler for the Ithaca Times circa 2015, he laughed and told me, “The light is sort of the main subject, and the scene or the topography or the buildings are sort of supporting actors.”)

The first time I noticed this curious light effect was in 1979. I was visiting the Norton-Simon Museum in Pasadena, California, and I saw my first Van Gogh. (Not in a book, but in real life.) It was a startling experience…the painting seemed to radiate light. Indeed, light seemed to blast right off the canvas. It was like being hit with a blast of high wind.

The landscape that most got my attention when I was at Brian’s studio was a long-shot, night view looking out over the city of Ithaca from a stone patio on Ithaca’s University Avenue. (I’ve actually been at that location in the real world.)

The light seemed to glow softly off the canvas as if Brian had sneakily lit the canvas with real lights from behind. For some reason, I found this painting especially compelling. (Note to Brian: I’d like to buy that one, if I could afford it.)

And so, in conclusion, I couldn’t recommend this show highly enough.

If the Art-Loving Reader can make it out to the North Star Gallery, I think he or she will find the experience richly rewarding. Or, if not, it would be worth viewing the paintings on-line at the gallery’s website.

Kurt Vonnegut wrote: “The function of the artist is to make people like life better than they have before.”

I think Brian Keeler’s marvelous paintings will more than serve that function.