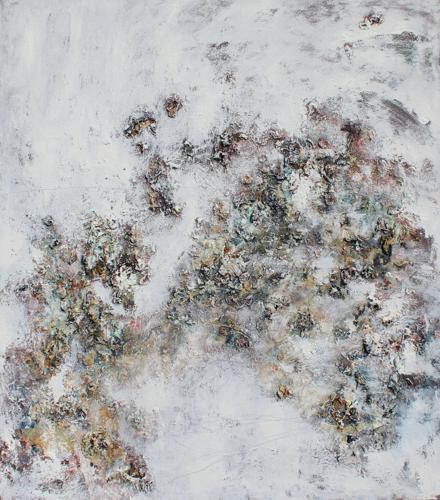 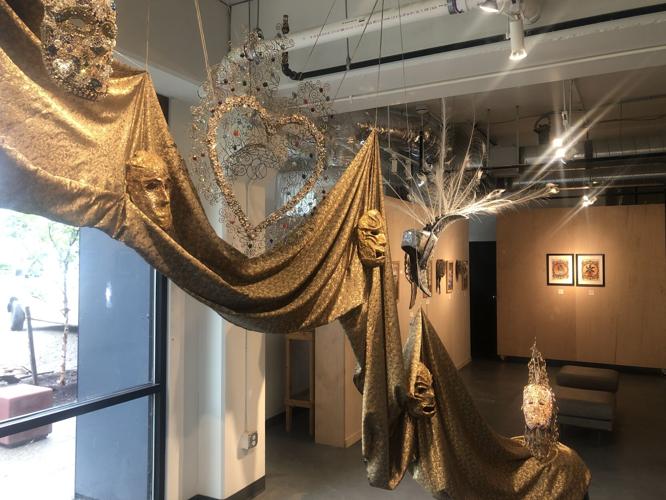 Mike Sullivan’s installation of hung fabric and masks, is the centerpiece of “Essence.”

Mike Sullivan’s installation of hung fabric and masks, is the centerpiece of “Essence.”

Opened last year along the culturally vibrant stretch of West State Street adjacent the Commons, The Rest has emerged as Ithaca’s most exciting new gallery. The brainchild of talented photographer Ben Bookout, the modest but nicely apportioned and thoughtfully furnished space hosts classes and concerts as well as regular exhibitions. It is home to one of the liveliest “first Friday” Gallery Night receptions going. It’s hard not to feel the energy going around.

Of course, ambitious art still has to stand on its own. For August, The Rest is hosting one of its strongest exhibits yet. Featuring a generous selection of abstract expressionist canvases by local newcomer Geena Massaro, “Destroyer” is an uncommonly mature offering from such a young artist. One looks forward to seeing more of her work.

Massaro’s paintings exhibit an obvious debt to the mid-century work of Cy Twombly in their use of scratched and scrawled textures, thick clots of impasto, and floral allusions. It’s a dangerous influence but her work here mostly avoids pastiche and mannerism.

It is extraordinary how much rich color Massaro embeds in these predominantly gray toned paintings. This important to stress, as local viewers misunderstand the expressive use of color in “serious” painting. You have to spend time with these pieces as physical objects. You have to get away from your screen, visit the gallery, spend time, move around, adjust your attention, and revisit certain works after spending time in the company of others. These are not dull or even austere works—rather they are joyously complex, more “colorful” than any rainbow hued Ithaca crowd pleaser.

Hung to the right of the gallery’s back wall, “Destroyer” is a remarkable painting. A square-shaped canvas with a relatively subtle use of impasto, it pulls striking emotional drama out of its color-space. Dense, asphalt-like black threatens to engulf the underlying field of white, rose, and fragments of pale blue.

“Untitled (Yellow and Blue)” does similar work, half-burying rich chroma in a seemingly neutral ground—here a thick dusting of snowy white. The dark, partially blackened clots of paint that stand out from this ground may appear, on first glance, to evoke a dead world of winter. Closer investigation reveals, fugitive glances of color and life: pale turquoise and ochre, terracotta among them.

A triptych, “Untitled (Trespasses)” is another standout. Again, not overdoing it with the paint texture, the drama unfolds across three adjacent but subtly distinguished canvases. A fog of warm gray enclouds more assertive notes of pale mustard and deep red. The wide format and relatively large scale of the piece serve to enfold and immerse the viewer—accenting the landscape feeling at play in all of these works.

These are museum-level paintings and it is a joy to seem them here.

Massaro’s is a remarkably assured and compelling show, one that eminently rewards careful attention and repeated viewings. In a cultural community that rewards a sentimental view of the creative artist and forced conceptions of “relevance,” the work here comes through with thick but nuanced forcefulness.

Founded by Samuel Buggeln, who serves as its artistic director, The Cherry Arts has been an important local venue for ambitious theatre and performance since 2015. Since this spring, it has held art shows in the newly opened Cherry Gallery—located in the Arthaus apartment building down the street.

For their late summer show “Essence,” The Cherry has recruited two artists with Ithaca connections. Yen Ospina is a popular local illustrator and muralist, while Mike Sullivan is a theatre designer and performance artist as well as a former Ithaca College student. The combination of these two in The Cherry’s new adaptable space—recently also used for dance performances—brings something new to Ithaca’s gallery scene.

The installation is distinctive. Displayed on irregularly configured movable wooden walls, wall-mounted pieces by both artists complement an elaborate suspended installation by Sullivan—“framed,” as it were, by a stretch of large windows providing a striking view of the inlet. The work of each artist is mixed rather than kept separate.

Ospina, who describes herself in the gallery bio as “a proud Latinx queer artist“ is one Ithaca’s most compelling digital graphic artists. Combining hand drawing, scanned fabric textures, and subtle on-screen manipulations, she conjures a distinctive personal mythology.

For her new work here, she appears to be moving away from the Art Nouveau-inspired stylizations that have characterized her past few years. Digging further into her signature surreal and folkloric imagery, she explores a knottier, “medievalizing” style that is delightful to view.

Although lack of local familiarity may play a role here, I found Sullivan’s work to be awkwardly chosen and presented.

His most striking work here is series of functional but often improbable-looking masks. Using cloth, wire, papier mache, found jewelry—as well as more exotic materials such as shattered mirrors and even wasps’ nests—he creates objects that hold their own as gallery art while suggesting a variety of performance possibilities.

An installation of hung fabric and masks, suspended from the ceiling of the gallery, is the show’s centerpiece. The piece recalls the unabashed theatricality of the Surrealists. It combines a heavy draped fabric, ornate and golden; a central frame form in the shape of a heart, bejeweled and decorated in wire curls; an empty picture frame; and masks alternatively rococo and raw. It is a spectacle.

Several framed photographs showing the artist wearing his own outlandish creations makes up the most notable weak point of “Essence.” Not formally interesting enough as images in their own right, they serve as documentation—as stand-ins for what the artist and gallery are apparently unable to give us. They aren’t bad to see but they don’t hold up their space on the walls.

One ought to be patient with the Cherry Gallery, which is clearly ambitious and clearly still figuring matters out. Given Sullivan’s performance background and The Cherry’s own institutional focus, it would have made this show stronger had performance been incorporated into its curation. Ideally, Sullivan and/or his masks would have been the subject of a live event. Failing that, video—or even a series of more carefully shot and selected photos—might have helped bring his work, so to speak, to life.

Nonetheless, this is an engaging show that hopefully portends interesting things for the new art space. The intersection of the visual and performing arts is an underexplored realm for the local gallery community. If the Cherry can press that dimension, it will have something more than just another place for local visual artists to show their work.

Through August 31 at The Cherry Gallery, 130 Cherry Street, www.thecherry.org; Open 5 to 8 p.m Fridays and 3 to 6 p.m. Saturdays and Sundays.