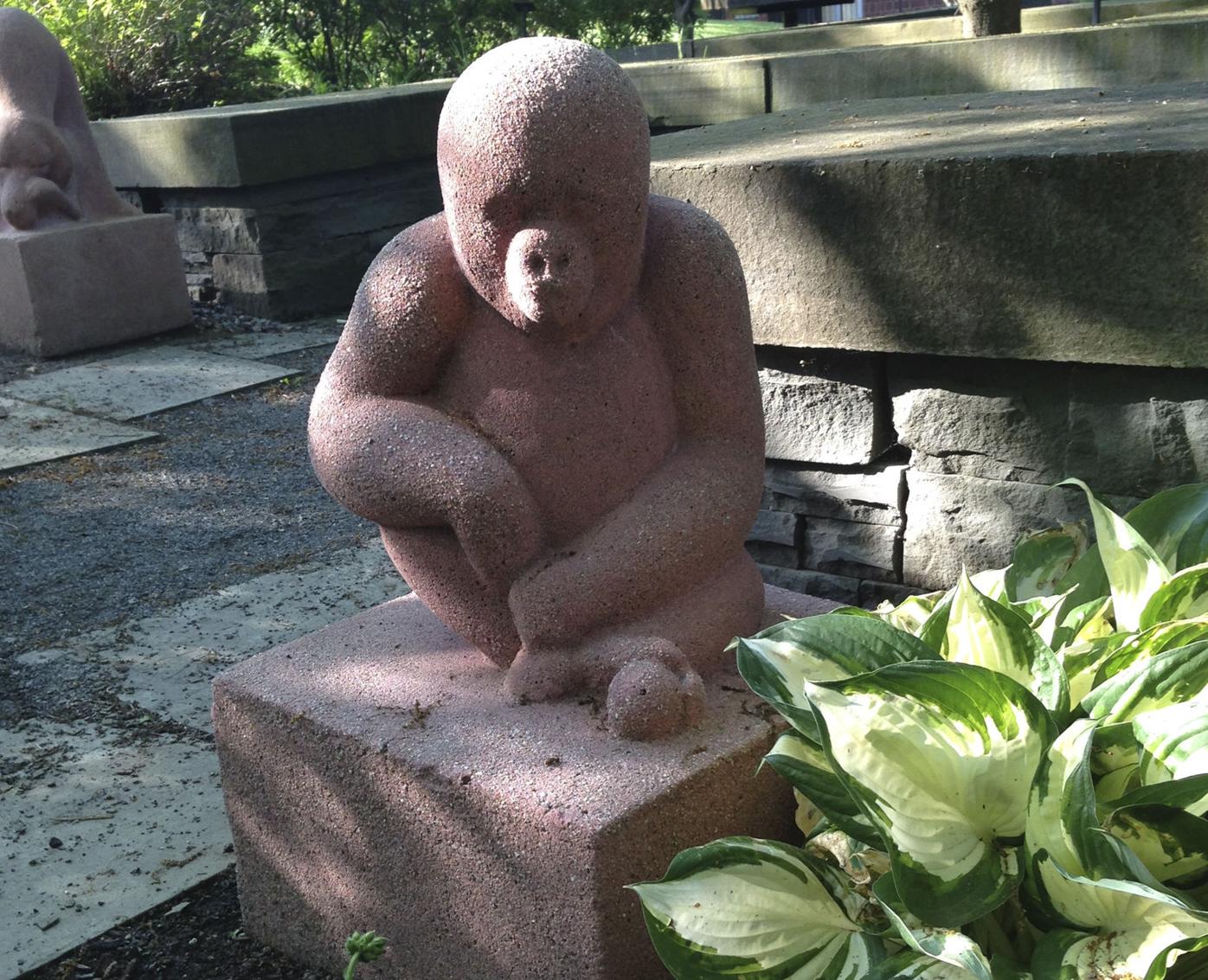 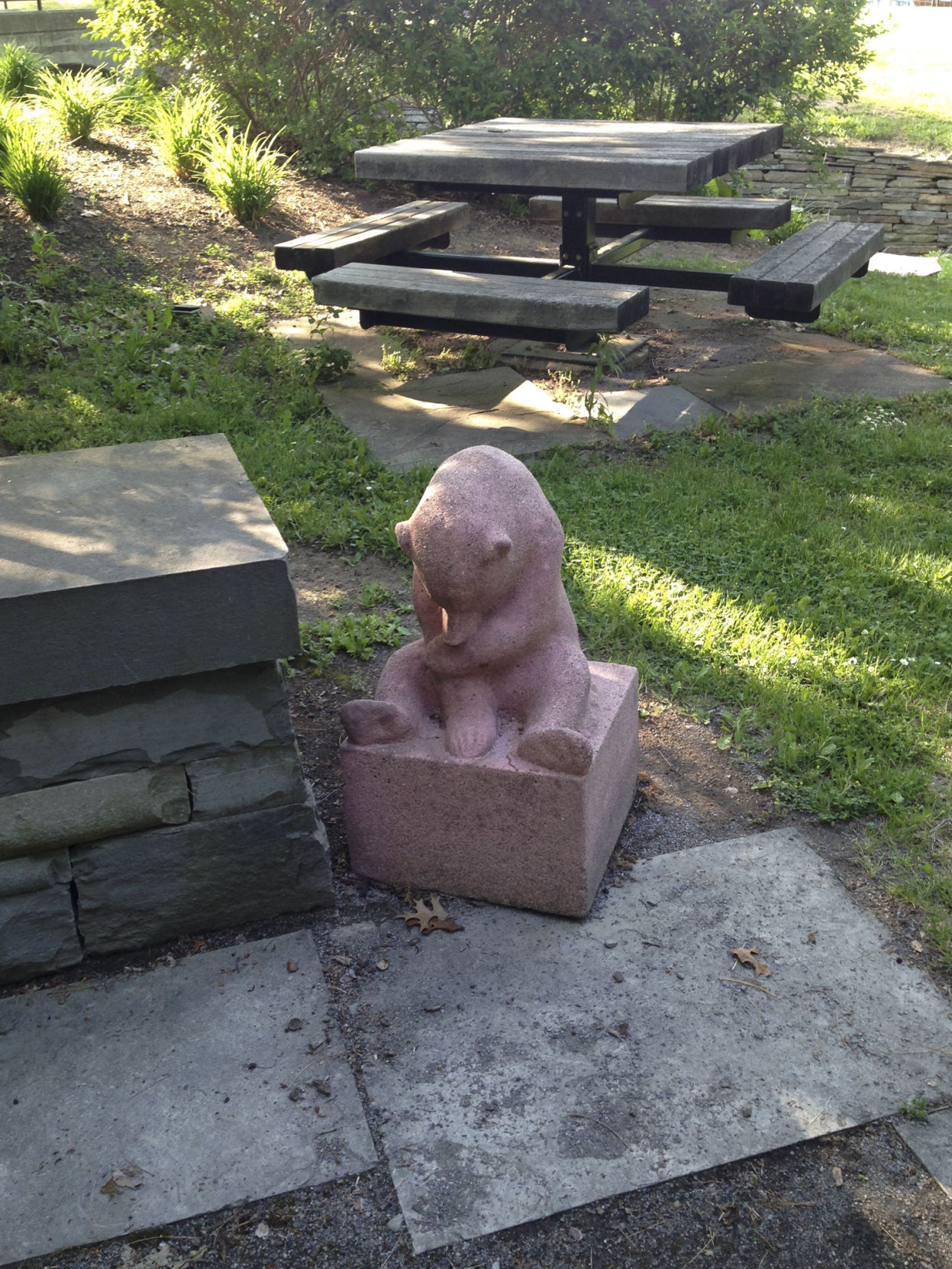 In late May local artist Steve Carver and objects conservator Kasia Maroney of Boston Restoration in Trumansburg spent two days covering eight concrete sculptures with chemical-infused poultices and then carefully cleaned off eight decades of biotic encrustation. The sculptures were created in 1938 by six artists employed by the Fine Arts Project of the federal Works Progress Administration (WPA) and take the forms of seven different animals (there are two bears). The newly cleaned statues are an earthy pink, the surfaces studded with gravel of varied mineralogy.

You can find these still, silent animals in a designed landscape just up the hill from the rear entrance of Cayuga Medical Center (CMC). Hospital employees use the area to take their breaks, sitting in the shade on benches surrounded by dense shrubbery; it is a bit of a retreat amid the glare and radiant heat of the hospital campus. A stream runs over small waterfalls nearby, producing gentle white noise that enhances the sense of getting away from the hubbub.

It seems likely that the sculptures’ original setting was something like their present location, although neither Carver nor Maroney has searched the WPA archives in Washington, D.C. for the information. It is known that they graced the garden of the children’s ward of Hermann M. Biggs Memorial Hospital, a tuberculosis sanitarium that became the county hospital. It was largely demolished in 1970s to make way for the new medical center. Some of the old cottage-style sanitarium buildings remain on the campus, including the “Biggs Building” that served as the county public health department for many years.

Carver, who moved to Ithaca from California in 1983, discovered the sculptures in a catalog for a travelling exhibition called “New Deal for Art.” They were the only WPA-commissioned arts works in Tompkins County. That they were sculptures surprised him; his previous experience with WPA art had been with the more famous murals.

The artist, now a painter, was working as an illustrator at the time, and had a special affinity for the 1930s and ‘40s, including the Social Realist work of Thomas Hart Benton, Grant Wood, and Reginald Marsh. When he found the sculptures at the medical center grounds he could see the social realist influence in the approach taken by Humbert Albrizio, Muriel Brennecke, Eugene Gershoy, Hugo Robus, Bernard Walsh, and Adolph Wolff, the makers of the Cayuga Medical Center animals listed in the “New Deal for Art” catalog. Carver had never heard of any of them and knows of no other examples of their work.

“They aren’t happy-go-lucky representations,” said Carver. “They’re kind of quiet. The physical representation is different than it would be if they were done now. We wouldn’t perch the elephant on a ball now, for example.” The sculptures were made in the New York City area and shipped up here. Carver hypothesized that zoo and circus animals were used as models, which may, he thought, account for the slightly melancholy feeling that they exude.

His quest to get the sculptures cleaned and restored was an intermittent one—he was pursuing a career and raising a family—but recently he found a receptive audience in current CMC CEO John Rudd, to whom he was introduced by attorney Jim Miller. His most recent and successful burst of energy was inspired by an article in Franklin Crawford’s online Tiny Town Times. Crawford was aware of the sculptures, but wrote that their creators’ names had “disappeared in the mists of time.”

“I looked at that,” said Carver, “and said to myself, ‘Wait a second. They’re not lost; I know who made those sculptures.” He spoke with Crawford and several other people before getting to Miller.

One of the first questions Miller had was “Who owns the artwork?” “Strictly speaking,” said Carver, “the federal government still owns them, just like everything else produced by the WPA.” It did seem quite unlikely, however, that the federal government would either claim ownership or come up with money to preserve the concrete animals.

Carver then needed a conservator, and he found Maroney through Trumansburg photographer Alex Solla, whom he met while taking a business development course offered by the New York Foundation for the Arts. This past February her restoration work on the Cornell cast collection was seen by a larger local audience.

“Steve contacted me over a year ago,” said Maroney. “He had a personal interest in the sculptures; sometimes things just speak to you. He had reached out [to CMC] for permission to find a restorer and he offered to help me with the restoration.”

While Maroney receives work from all over the country, she said she had never worked on WPA sculptures before. Many of those made in the 1930s, she said, have since been absorbed into collections or destroyed. She looked at the animals for the first time in fall 2015, put together a proposal to present to CMC, and then planned for six months. She had done this kind of work before; she takes care of the outdoor sculpture garden at the Memorial Art Gallery in Rochester.

“Artists tend to specialize in a medium,” she said, “but restorers specialize in a particular material.” Maroney’s primary focus has been porcelain and other ceramics, but she has done much work with stone, glass and other materials. Because she is a freelancer rather than part of a team at an institution, she handles a broader range of work than some in her field. Maroney has a master’s degree in early 20th century art history; like Carver, she felt a particular affection for the WPA animals at CMC. WPA art, she said, has recently risen in the estimation of the academic arts community.

“They were covered with lichen, moss, algae, mold and fungus,” said Maroney of the animals. “They’re all in the air around us and take hold when they land where conditions are right.” She said the often moist and rough surface of the concrete sculptures is a perfect medium.

“Eighty years of rain eroded the horizontal surfaces,” the conservator said. “The limes were dissolved by the rain, which is naturally acidic. When they were first made, they were slightly more detailed than they are now.” Maroney suspects that the original pieces were formed in clay, which was then surrounded by a mold. A mixture of lime, clay, and gravel was poured into the molds. The mixture is the same for all the animals, so both Carver and Maroney believe that either the artists worked in concert or that one person did all the pouring after the molds were made.

While it’s fine for Maroney to speculate about how the artists worked, she likes to be quite sure about the nature of the material she is working with. “The number one rule of restoration is ‘Don’t guess’.” Materials behave predictably, she said, so there is no need to guess.

Maroney said that the original clay models were not likely to have been preserved. The clay models of the sculptures, which are generally about three feet long and 18 inches in diameter, would have been too massive to fire in a kiln. The cast that emerges from the mold, said Maroney, is considered the work of art.

The conservator said that sculpture is still produced by this method, but many commercial lime-based mixes are available (e.g. Quikrete). In the 1930s though, she thought, these artists likely made their concrete mixture from scratch.

Maroney first cleaned the sculptures with an archival-quality soap and then covered them with poultices filled with four different ammonium chlorides and buffering agents to reduce the acidity. This killed the organic cells covering the concrete. She and Carver then removed the crust with soft nylon brushes. Finally, she sprayed the cleaned sculptures with a dilute ammonium chloride solution to discourage new growth.

“But one is never done with maintenance of outdoor sculpture,” Maroney said. “Institutions that own these build stewardship into the budget. Every few years they should be sprayed again.” Removing 80 years of growth was relatively inexpensive, she said. It took Maroney and Carver two days to clean all eight. Carver volunteered his time; it would have taken her four or five days without his help, she said.

“They are a long way from perfect,” said Carver, “but they are 99.9 percent better than they were a few weeks ago.” •