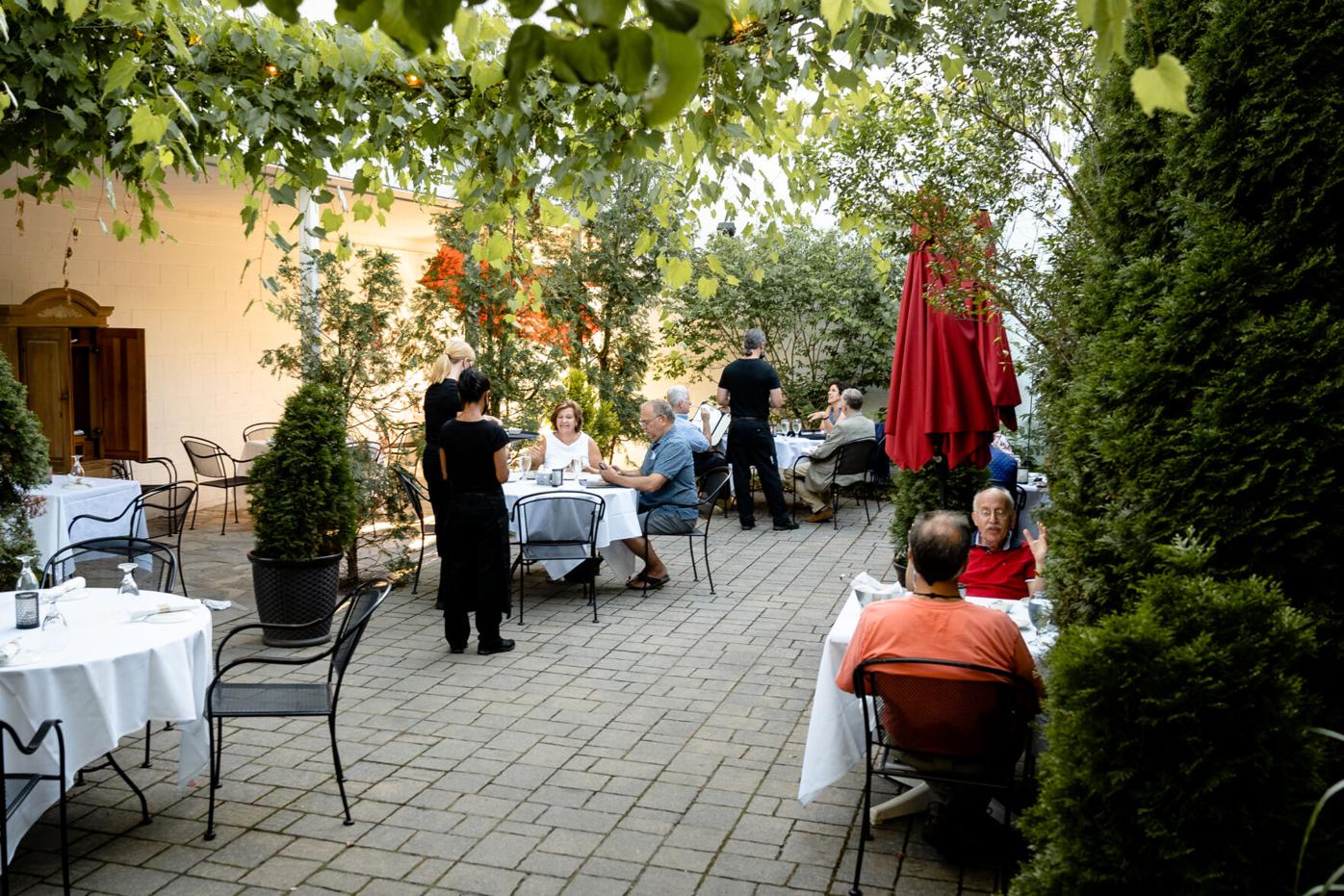 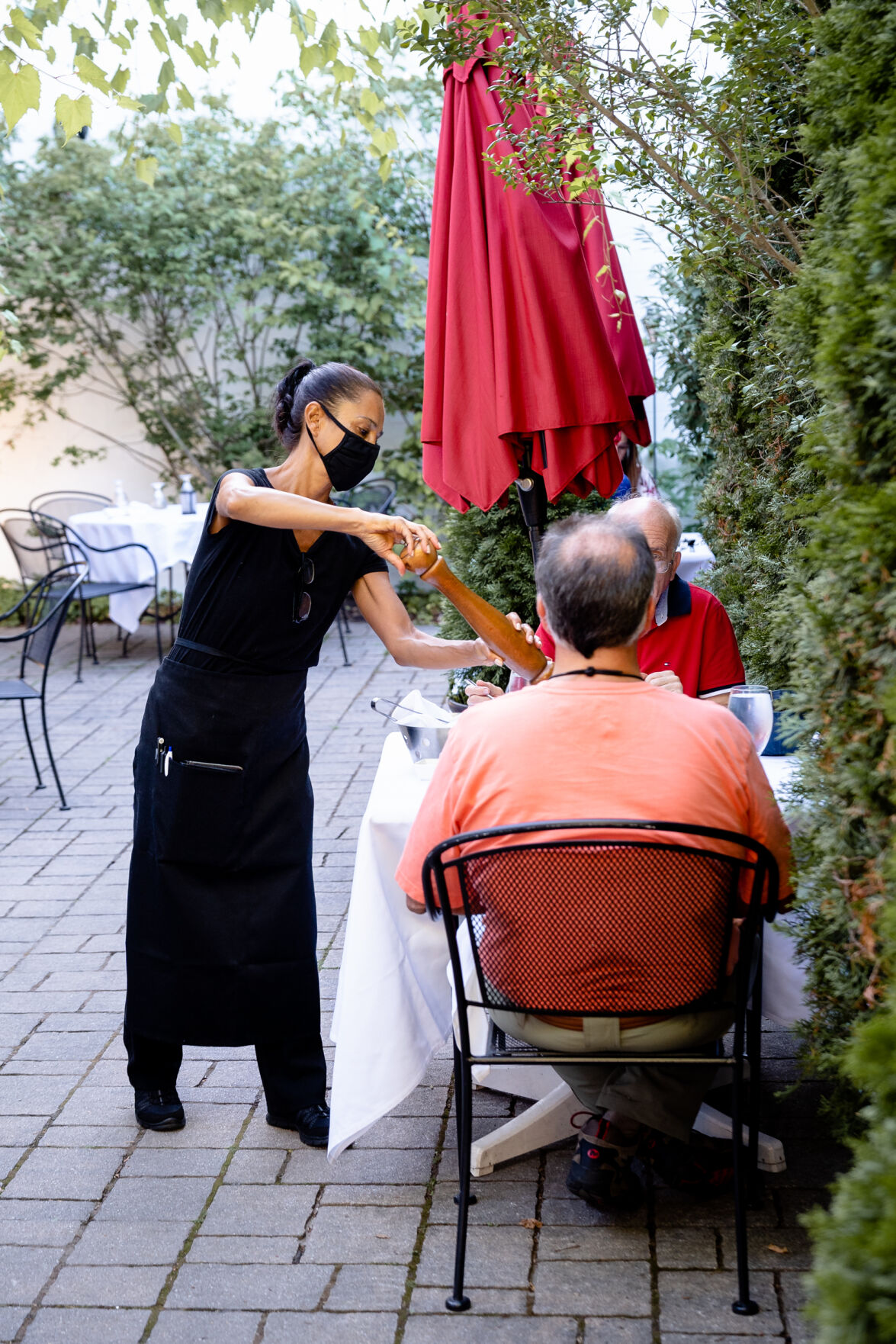 The Heights, located in Community Corners in Cayuga Heights, is currently serving some of the best food and most interesting wine in greater Ithaca.  However, it comes at a price.

Unless you’re interested in having a burger made with pork belly at $23, six of the other nine entrées cost $35 or more.

Even the seven starters range from $13(Sicilian cauliflower) to $19 (Portuguese octopus), and the soup du jour costs $9-$10.

Several pizzas are listed on a separate section of the menu but the food at The Heights is so good I wouldn’t go there for pizza.

The wine menu, which is extensive, is also expensive, and the wines I’m familiar with carry a high markup.  The only two bottles of wine I can find for less than $45 are $44 — by the glass they’re $11 to $17.

I recently ordered Duck Breast ($39). It was delicious — crispy on the outside and juicy on the inside. It shared the plate with two large asparagus spears, a slice of fried green tomato, a small section of acorn squash and watermelon cubes.

One of the more inexpensive items is Seven Spice Chicken ($29) which was accompanied by a small portion of broccoli and mushrooms. The chicken, too, was cooked perfectly — easy to cut and chew.

The arrival of the Beef Short Rib ($38) entrée was impressive. Two large ribs lay perpendicular to each other with some al dente green beans strewn across the top. Attractive presentation at The Heights is obviously a priority in the kitchen. The ribs were accompanied by a brown gravy and some creamed sticky rice.

The Seafood & Gnocchi entrée ($38) reminded me of a Bouillabaisse only with a creamy white sauce instead of red. There were four clams shells, three shrimp, and a strip of smoked salmon lay across the top.  Small bits of mushroom, spinach and tomato were evident in the gravy, and a scoop of ricotta cheese rounded out the presentation. The complex variety of flavors added to the interest.

Each evening there are a few specials. One evening it would have been more professional if our server had known their prices instead of having to go to the kitchen to check when I asked. When she returned, she told us there were four doctored oysters served as an appetizer for $20.  Five dollars an oyster, particularly as a starter, was too much for me so I passed. On two other occasions, two different servers had to leave us to retrieve an “up-to-date” wine menu as the ones first delivered lacked a by-the-glass page.

Entrées are accompanied by a choice of salad: Caesar or mixed greens.  Both are attractively presented and both feature fresh, crisp, chilled greens. The salad portions were so large I wondered why they weren’t offered as a dinner entrée, perhaps with an optional added protein, e.g., shrimp, chicken, tofu. This could have been helpful to vegetarians, vegans, or people allergic to gluten, as there isn’t a section of the menu devoted to special diets and there aren’t any abbreviations on the menu to indicate those items.

Some relatively common desserts are offered ($9-$10). I’ve enjoyed tiramisu and crème brûlée. They are homemade and rich.  The tiramisu was a traditional layered cake with alternating layers of homemade whipped cream. The crème brûlée was topped with a small scoop of cinnamon whipped cream and had an unusually layered bottom of chocolate Nutella.

When dining out with a companion, we usually share a bottle of wine, however the prices at The Heights are so high, each time I visit I eschew wine altogether in favor of an iced tea or coffee.

Although the prices are high, the portions are large and I invariably leave with leftovers.

Without an alcoholic beverage, and often passing on dessert, dinner for two at The Heights usually runs over $100 with tax and tip, however I always leave the table knowing I’ve enjoyed a quality meal — attractively presented and efficiently served.

-There is a single unisex restroom at restaurant level. If it’s occupied and you don’t want to wait, your only option is a very long and steep staircase to a lower level.

-The large sign on the shopping center property reads Corners Community however it’s Community Corners on the restaurant website.

- I asked several members of the staff why the bar was called the H Bar since it’s not in the shape of an “H.” No one knew.