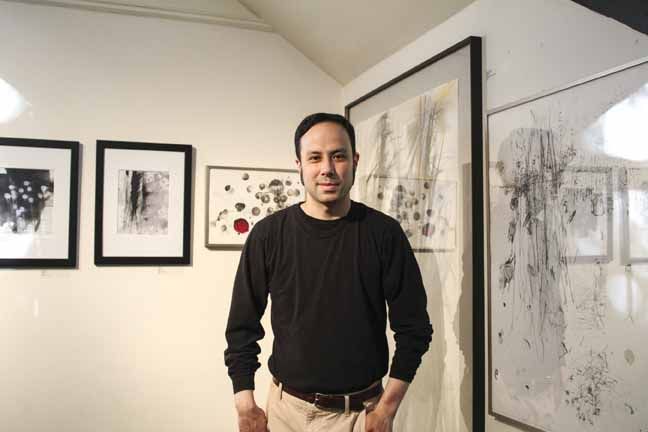 Arthur Whitman curated Drawn, an exhibit at Ithaca’s Community School of Music and Arts that features work from 26 artists. 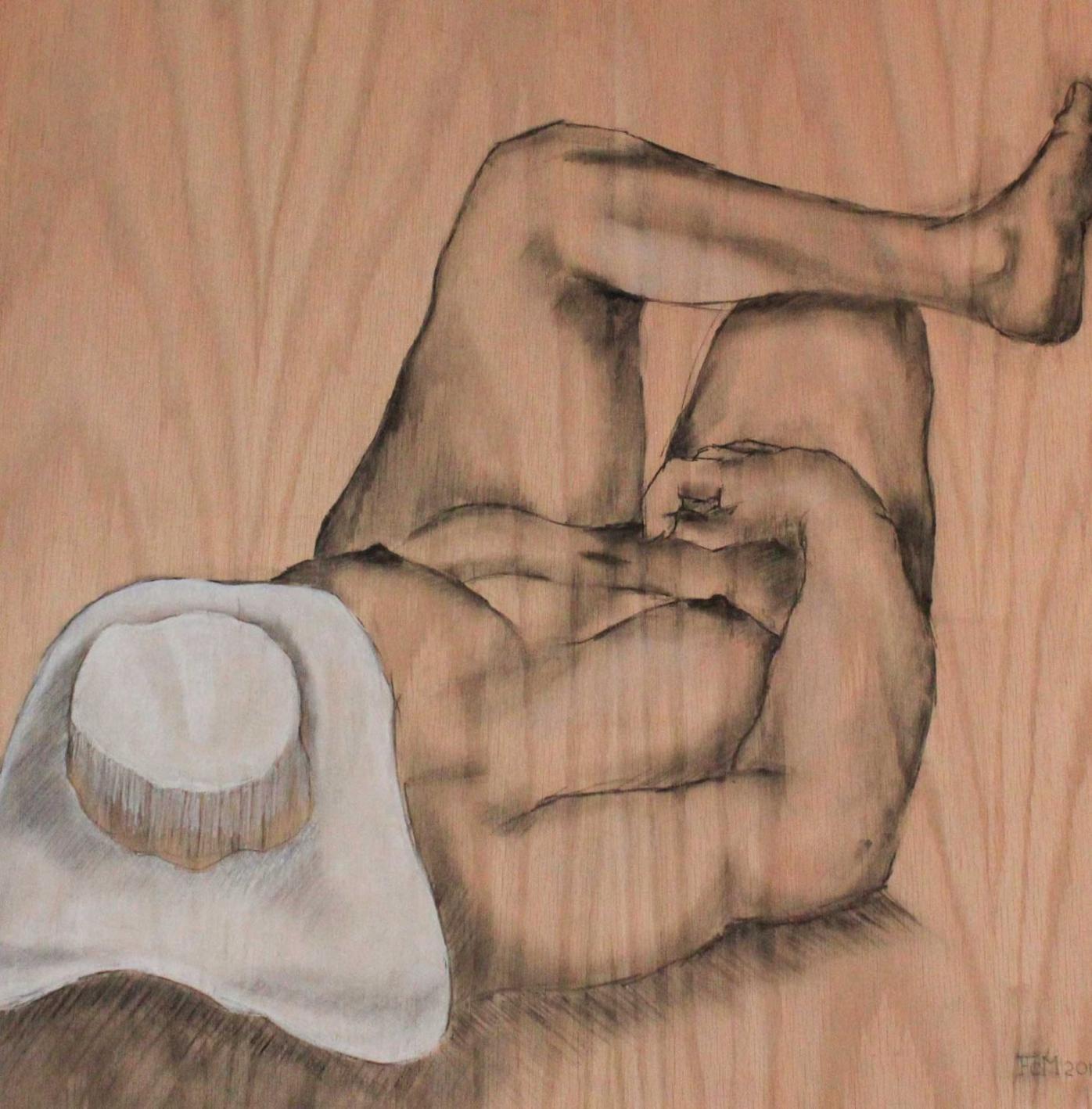 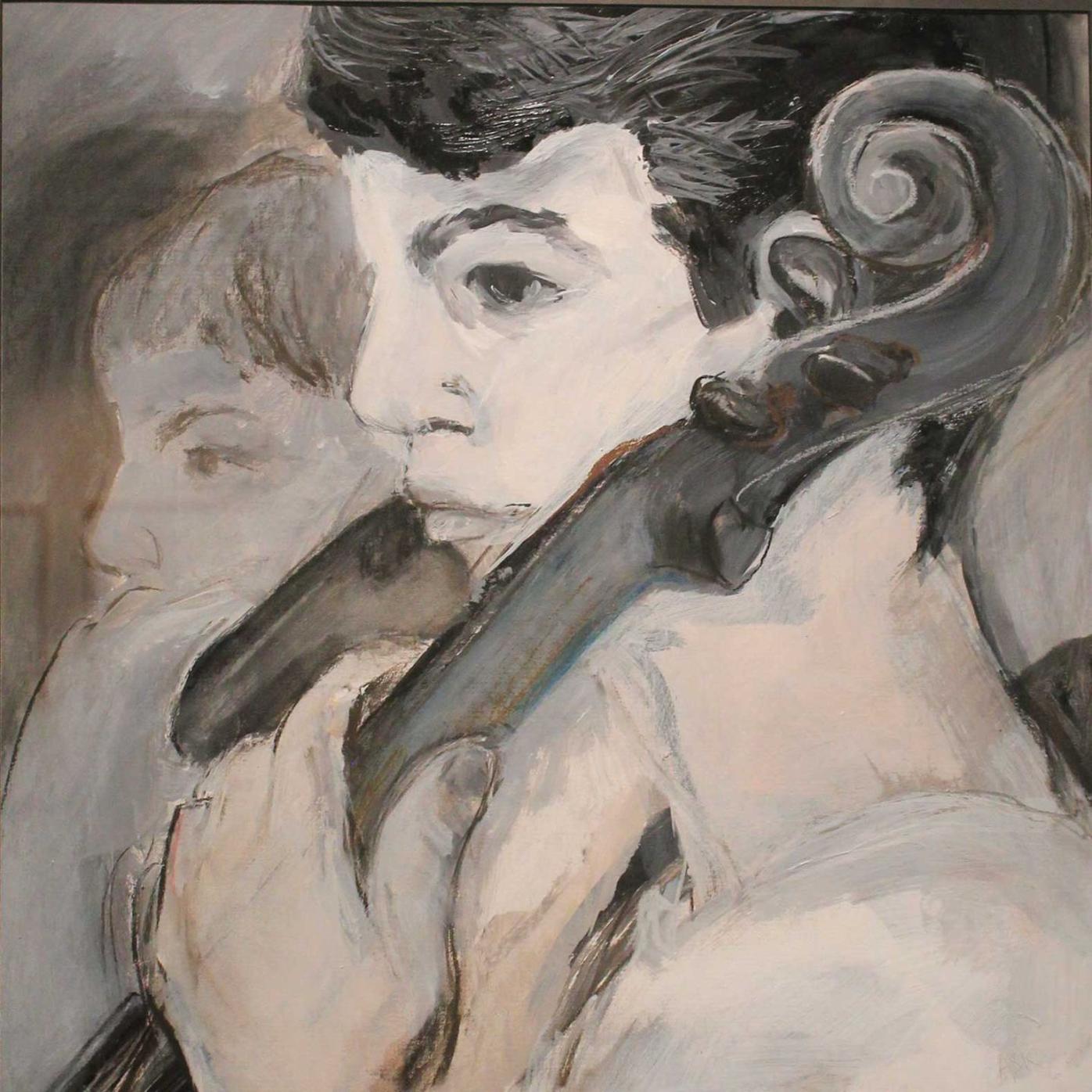 Arthur Whitman curated Drawn, an exhibit at Ithaca’s Community School of Music and Arts that features work from 26 artists.

The function of the artist is to make people

Drawn is an exhibition of the art of drawing being hosted by the Community School of Music and Arts.

Our own Arthur Whitman, the Ithaca Times art critic, curated the exhibit (with a team including CSMA executive director Robin Tropper-Herbel, the Ithaca artist Irina Kassabova, and Michael Wellen). This is an amazing show. There is a lot of work here—fifty-four pieces—and a lot of great stuff. There is so much here, I couldn’t possibly describe it all, so I’ll sketch in some of the works I found most attractive …

I suppose because I am a cartoonist, I am drawn to the more representational art. And I really like Sidney Piburn’s figure drawings. He’s got an excellent grasp of human figure drawing, a kind of admirable simplicity, and a sensuous Toulouse-Lautrec-like line.

These are somewhat realistic, slightly impressionistic drawings of the Ithaca area waterfalls. Rainbow Falls is perhaps the most spectacular piece: a tall vertical drawing (that I suspect is of the Robert Treman State Park upper park Gorge Trail) with rushing water splashing through a gorge and into a little circular stone pool. There is a waterfall coming down in the foreground, and one of those Civilian Conservation Corps—Lord of the Rings stone bridges spanning the gorge in the background, and ethereal trees and foliage topping the gorge.

And, to me, the most compelling thing is Loomis has chosen a section of the gorge where the shale and sandstone and siltstone have been carved by a glacier into curving, flowing patterns (like mollusk shells and spinning tops and the canyons of the American Southwest …)

The work is drawn on an olive-green paper with back charcoal and conte crayon, and the flow of the water is rendered in iridescent white conté crayon.

This is an extraordinary, beautiful piece.

I have admired Werner Sun’s sculptures in the past and written about them. (I saw them at the old Spirit and Kitsch Gallery on Elmira Road, and the Corners Gallery in Cayuga Heights.) His works in the Drawn exhibit are 2D works. They are composed of black-and-white-and-gray inkjet prints of what looks like landscapes from another, mathematical universe … (or perhaps a glimpse of the quantum foam). And then, thin red thread has been layered upon them in lightning bolt-electrical/mathematical patterns.

I don’t know why I find these works so appealing. I tend to favor representational (if fantastical) art over pure abstract expressionism. Perhaps it is because, to me, these look like a glimpse of another universe (and I have a life-long love of science fiction illustration).

Kim Schrag has three pieces in the show. Celeriac—Relationship is my favorite. This is a big black-and-white charcoal drawing of two head lettuce-like organisms, one sitting on top of the other. The bottom one looks like a head of lettuce, the top one looks like some sort of H.P. Lovecraft creature from another universe … a miniature Dunwich Horror perhaps … a mass of writhing, tentacle-like roots.

(I made a note to ask Arthur Whitman what these things were … but he didn’t know, either. Fortunately, my Pontiac-sized Webster’s New Universal Unabridged Dictionary told me that celeriac is “a variety of celery: called also the turnip-rooted celery.” And I was greatly relieved that it was a terrestrial plant as opposed to some horrible alien creature.)

Celeriac—Relationship is a beautifully drawn work in a near-academic realism, though a bit livelier, with a touch of impressionism. (And I particularly like the way the tone in the background has a sort of 1940s feel…like, say, the development art at the Walt Disney Studios in the 1940s, or the political cartoons of the 1940s.)

I like this one quite a bit. This is a pastel-like, impressionist drawing of a road leading into the Catskill Mountains. There are pine trees in the foreground, the winding road, wreathed by a line of trees, in the mid-ground, and a soft, round, upstate New York breast-mountain in the background.

There are muted, pastel-like colors: purple and blue and yellow and violet on the mountain, muted yellow and blue on the hillside above the curve of the road, a baby blue sky and white clouds, and dark green on the pines. Altogether, a beautiful work … capturing that highly specific upstate, N.Y. beauty…

I can’t tell you how much I love this one. This is a black-and-white drawing (a medium close-up) of a young woman sleeping. It is drawn with extremely thick, extremely simple brushstrokes in a very spontaneous fashion, like, say, Japanese brushwork calligraphy.

It is an extraordinarily charming work. A very stark use of black-and-white—yet, it is warm. It reminds me of something that the great cartoonist and educator Burne Hogarth once pointed out to me: drawing is not photography. Somehow, by the utter simplicity of the technique, this piece is more charming and magical than a photo could ever be…

Meyer Stolov has several works in the show. But I find this one especially compelling. It is drawn with black-and-white charcoal on gray paper. It reminds me of Rembrandt’s portraits in its ability to somehow illuminate the beautiful humanity of a human being. There is a sweet humanity to this one that makes me want to weep …

This drawing is composed of six small cartoon illustrations (from what I assume is a summer cottage on a lake). They include a motorboat at a dock, a heron, embroidered pillows piled on a bed, an old bygone era Maytag washing machine, two hammers and a cluster of nails, and a fishing pole. It is an irresistibly charming piece … (and has a feel like a New Yorker cover).

There are several artists represented in the show that I have written about before. One is Margaret Reed, whose work I adore. She has three works in the show. All are marvelous, but I was particularly attracted to The Knight of Cups.

It’s sort of halfway between a medieval illustration (say, from a tapestry or an illuminated manuscript) and a modern magazine illustration. We see a knight, hands folded, looking at the viewer, standing before a river with a black swan floating in it, a marsh, and a forest of very stylized willows and pines. There is a black, eclipsed sun in the black sky, a rather human looking lion at the knight’s feet, and a cluster of fish dangle mysteriously from the knight’s folded hands. This thing really is a work of genius.

I have also written of the work of Irina Kassabova before. She creates large abstract expressionist drawings (virtual paintings) on the themes of music and musical instruments.

This is Whitman’s favorite work in the show. (I, being more attracted to representational art, walked right past it on my initial viewing as if I had blinders on, but, on closer examination, I concluded that it is not to be missed—it is a richly rewarding art-experience …)

To sum up here, this is a terrific show and certainly worth your attention. Indeed, there is so much great stuff here that I think the show could easily support multiple viewings.

My suggestion is that the Art-Loving Reader might drop by CSMA if he-or-she is in the downtown Ithaca area and has a bit of time to spend for a cultural event, and take in the show over the course of two or three viewings.

And, hopefully, the Reader will like life a little better than before.

The exhibit Drawn will be on display at the Community School of Music and Arts, 330 East MLK/State Street, Ithaca, N.Y. until Sept. 26. Visit: csma-ithaca.org.