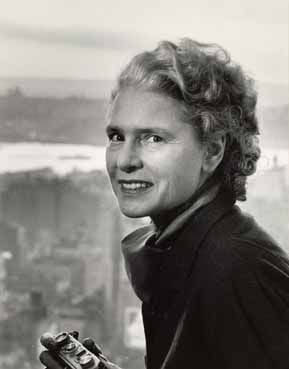 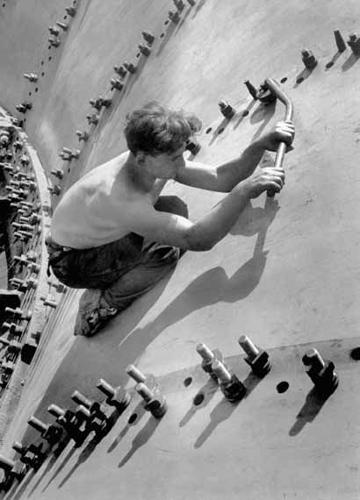 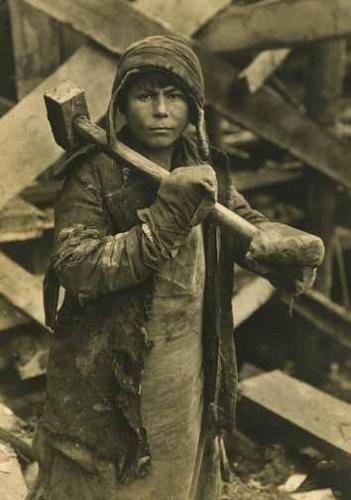 One of the great American photojournalists of the 1930s and ‘40s, Margaret Bourke-White (1904-1971) was a celebrity in her day and a pioneer for women in her field. Her hectic, freewheeling career took her around the United States and the world: atop skyscrapers, into factories and mines, across city and country, and into the midst of world war.

Bourke-White was a pioneer of the photo essay—that narrative form in which the pictures are at least as important as the text. Among other publications, she famously worked for two of publisher Henry Luce’s influential magazines: Fortune and Life, both from their inception (1929 and 1936, respectively). She authored numerous topical photo-books, as well as a 1963 autobiography, Portrait of Myself. Her photography bridged high modernism and the emerging mass audience.

“Margaret Bourke-White: Moments in History 1930-1945” is a major traveling exhibition, with over 180 photographs spanning the breadth of her interests. It was curated by Oliva María Rubio, Artistic Director of La Fábrica, a museum in Madrid. Its final presentation at Syracuse University’s art galleries (from Aug. 19 to Oct. 19) follows a two-year European tour.

Bourke-White bequeathed her personal archive of prints and documents to Syracuse  University. SU’s Bird Library houses a Special Collections Research Center that has provided most of the material for this exhibit. The SCRC is putting on an accompanying exhibit, “Context: Reading the Photography of Margaret Bourke-White” (through Jan. 16, 2015).

Other pieces are on loan from the Howard Greenberg Gallery and from the Gary Davis Collection.

Margaret White was born in the Bronx and grew up in nearby Bound Brook, N.J. Her father, Joseph White was an inventor and engineer who inculcated in her a lifelong fascination with the worlds of science and technology—even going so far as to take her, as a young girl, to visit a foundry. He was also an amateur photographer, developing images in the family bathtub. Her mother was Minnie White, née Bourke (the hyphen was Margaret’s own invention). A homemaker, she was a strict woman who taught her daughter self-determination—or so the accounts go.

A freshman year at Columbia University introduced her to Clarence H. White (no relation), a leading practitioner of the soft-focus Pictorialist school that dominated self-consciously “artistic” photography around the turn of the century. He was also an influential teacher during his later years—with students ranging from the great documentarian Dorothea Lange to Ralph Steiner, Bourke-White’s later mentor and critic. He introduced her to photography as a career and also to Modernist aesthetics—particularly the Asian-influenced theories of the Arthur Wesley Dow, who himself made photographs in addition to his better-known paintings and prints.

Her peripatetic college career brought her to Cornell. She arrived in fall 1926, fleeing a failing first marriage to her former classmate Everett Chapman. Before graduating the following year with an undergraduate degree in biology, she started a business selling campus photographs. If their pictorialist style—which she abandoned a few years later—mark them as juvenilia, her precocious entrepreneurship set the path for the rest of her career.

Most of the pieces in “Moments” have been hung in groups of two to six, based on their narrative or thematic connections. A few, often particularly well-known images hang in isolation. They have been organized in rough chronology and by locale: America 1930-51, Germany 1930-32, the Soviet Union 1930-32, Czechoslovakia, Soviet Union 1941, and World War II.

A small selection of ephemera complements the framed photographs. One glass case holds several vintage magazines while another (double-sided) one holds some of her correspondence.

The case contains typed and handwritten letters showing off the range of her distinguished contacts: everyone from the novelist Pearl Buck to fellow photographers such as Berenice Abbott and Alfred Eisenstaedt to the office of Franklin Delano Roosevelt. Most peculiar is a 1940 missive from Adolf Hitler (perhaps unaware that she was half Jewish) who offers her his Christmas and New Years well wishes—and a sample of coffee.

Images of FDR and Josef Stalin are among her portrait work here. A 1938 piece pictures the U.S. president behind the wheel (and glass) of his Ford Phaeton, his head facing to his right. (Although not shown, the special design featured hand controls that allowed him to drive despite his paralyzed lower body.)

Her image of Stalin here—taken from a 1941 series—shows the famously stony dictator with a tinge of a smile. As she reported in her autobiography, she was able to achieve this only inadvertently after spilling flashbulbs from her pocket and “scrambling” to retrieve them. “I guess Stalin had never seen an American girl on her knees,” she remarked.

Her most compelling images of people show them not staring at the camera—or off into space—but enraptured in their work, often in their machines. It is tempting to view this as an echo of her own identification with her camera.

Bourke-White made her name early on as an industrial and advertising photographer. In winter 1927-28 she photographed the inside of the Otis Steel Mill in Cleveland, unheard of for a woman at the time. Countless commissions followed from this technically innovative work, with clients ranging from Ford to NBC.

Some her industrial and product images verge on abstraction, featuring dramatic lighting, close-ups, unusual perspectives, and repetition. (Indeed, her work was sometimes too stylized for her patrons.) A characteristic 1930 shot for the Aluminum Company of America shows a bundle of upright metal rods shot at an oblique angle and with a rich chiaroscuro.

The artist’s fascination with industry brought her to the Soviet Union in 1930 as the first foreign photographer to be allowed into the rapidly modernizing nation. She returned in 1931 and 1932.

A 1930 picture of a young Russian factory woman shows her in profile, leaning over the wheels of her lathe. A series, sampled here, documents the raising of a dam and hydroelectric plant in Dnejprostroj—foreshadowing her later work on similar subjects in the United States. A heroic 1930 shot shows a bare-chested man perched on a plant wall, tightening the nuts with a bar. Other Soviet images show scenes of agriculture and daily life, anticipations of the humanistic turn Bourke-White’s work would take later in the decade.

Bourke-White was fascinated with the world as seen from above. During her early days in Cleveland, she photographed—and briefly rented apartment and studio space in—the then brand-new Terminal Tower, a Beaux-Arts skyscraper crowning the city’s main train station. Soon after, she moved to New York City where she photographed the rise of the Chrysler building. During the early thirties, she inhabited the 61st floor there.

Shot from airplanes and skyscrapers, bird’s-eye-views of the New York City form a small but particularly memorable part of this show. Oblique angles and vast vistas give a rich portrayal of the modern metropolis. (Also on show is a 1951 aerial view of oil tanks, shown as an tilted grid of mismatched cylinders.)

A particularly striking 1932 image shows the avant-garde Soviet filmmaker Sergei Eistenstein getting a shave on the terrace of the artist’s Chrysler building studio. His head, leaned back, rests in the hands of a white-clothed barber. His body is forcefully cut off by the bottom edge. The background is a vertiginous plunge with towers in the distance defying gravity.

Bourke-White’s most iconic work, one of her 1936 shots of the Fort Peck Dam in Montana, graced the cover of the inaugural issue of Life Magazine, dated Nov. 23, of that year. Taken from a series narrating the construction of the New Deal project—the cover story—the spillway of the dam is shown as an imposing fortress wall: a sort of cubist castle with a diagonal procession of crenellated towers dwarfing a pair of workers below.

(A 1965 print can be seen at Cornell’s Johnson Museum as part of their new and ongoing first floor reinstallation of their 19th and 20th century European and American collections. The recently opened gallery also holds several paintings and drawings from the first half of the twentieth century—many of which resonate with the era’s Machine Age aesthetic.)

1936 marked a turning point in Bourke-White’s career. Her appointment to staff photographer at Life marked a gradual transition from the industrial and architectural themes of her earlier work towards more general photojournalistic subjects.

She was, by all accounts, extraordinarily good at her job—technically accomplished and possessed of an uncanny ability to be in the right place at the right time. Still, for better or sometimes possibly for worse, her early work has a distinctive approach rooted in her interest in cities and machines. Looking through her later work feels more wide-ranging and uneven.

As mentioned above, a long case a holds a few vintage Life magazines. It is worth noting the disparity between the rich tonalism of her original prints and the much duller qualities afforded by the reproduction technologies of her time.

A 1938, she traveled to Czechoslovakia and Hungary following the Nazi annexation of the Sudetenland. Her focus is on civilian life; three particularly compelling images show young Jewish boys engaged in Talmudic studies.

Bourke-White was in the only foreign photojournalist in Moscow in 1941 when the Germans began bombing the country. Instead of heading for a shelter, she headed for the American embassy, where she shot several nighttime images with dramatic streaks of light that resemble fireworks.

In 1942 the artist received accreditation from the U.S. Air Force as the first female war correspondent, a position that allowed her to go on bombing missions. She traveled through England, Italy and Germany, all of them shown in several images here which record the effects of war on civilian life.

Bourke-White was present as General Patton’s Third Army liberated Buchenwald in April of 1945. A particularly famous photo shown here portrays a crowd of male prisoners in jackets and striped uniforms, some pressing their hands against the wire fence. As well as the survivors, other images from the haunting series show piles of corpses as well as German civilians, who were given tours of the atrocities by the American military.

She recalled the experience in her 1946 book Dear Fatherland, Rest Quietly. “Using the camera was almost a relief; it interposed a slight barrier between myself and the white horror in front of me,” she wrote.

Both a sophisticated modernist aesthete and an enthusiastic participant and the worlds of advertising and journalism, Bourke-White’s multi-faceted work is an appropriate subject for a sprawling, necessarily uneven exhibition like this one.

Although not shown here, Bourke-White continued to work on major projects after the war. In the late forties, she traveled to India and Pakistan to record the partition and conflict there—her 1946 image of Mahatma Gandhi seated at his spinning wheel is familiar to many. She later portrayed the Korean War. Starting in 1953, she struggled with Parkinson’s disease, which brought her career to a premature halt. She died of illness in 1971 in Stamford, Connecticut. •

Information about the Syracuse University Art Galleries, which holds public evens as well as concurrent exhibitions can be found at suart.syr.edu or by calling 315-443-4097. Hours are from 11 a.m. to 4:30 p.m. Tuesday and until 8 p.m. on Thursdays.