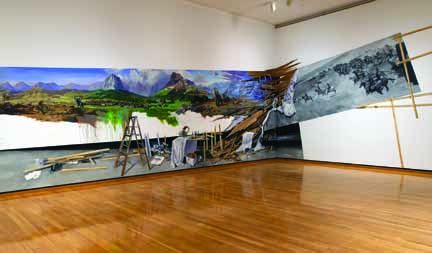 Installation view of Food-Water-Life/Lucy+Jorge Orta at the Johnson Museum. 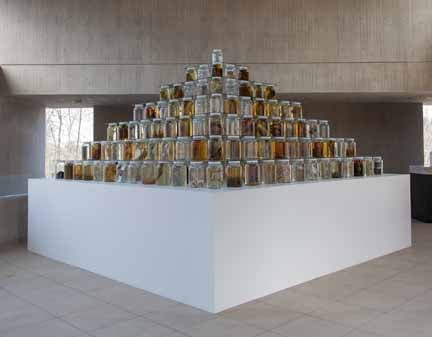 Brandon Ballengée, Collapse, 2012. On view as part of beyond earth art • contemporary artists and the environment. 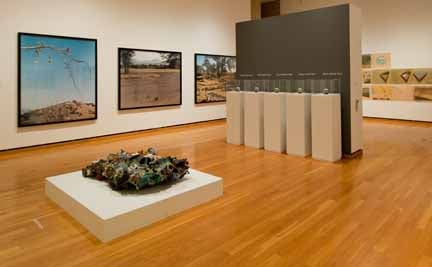 Installation view of beyond earth art • contemporary artists and the environment (Floor 2L) at the Johnson Museum.

We gaze continually at the world and it grows dull in our perceptions.Yet seen from another’s vantage point,as if new, it may still take the breath away.

Earth Day is approaching. So it’s not a bad time to think about the homeworld, the planet that that most beloved of Ithacans, Carl Sagan, called the Pale Blue Dot.

That came about because Dr. Sagan was on the team involved with one of the spacecraft that left our solar system, the Galileo I believe, and he talked them into having the spacecraft, just as it reached the edge of our solar system, turn around and shoot a photo of Earth. They told Dr. Carl that there was no valid scientific reason for this, and he responded, “It’s poetry.”

The result was seeing ourselves as if we were aliens just arriving in our solar system. The Earth is a Pale Blue Dot in an immensity of black nothing.

Sagan put the photo in the frontispiece of his book Pale Blue Dot. I always tear up when I look at it.

Earth is home. A moist and nourishing sphere that gave birth to us and keeps us alive.

This is not to say that Earth can’t play a little rough at times. There are earthquakes, floods, wildfires, typhoons, tsunamis, hurricanes, cyclones, volcanoes, lava flows, polar vortexes, and the occasional incoming giant meteor or asteroid.

And that name. Earth. What a charmingly humble name. Like naming your planet “Dirt” or something.

Well. All this is a preamble to writing about the exhibition beyond earth art: contemporary artists and the environment at Cornell University’s Herbert F. Johnson Museum of Art. (The Johnson is that big Brutalist building up on Libe Slope that looks like a Star Wars Imperial Walker made out of Legos.)

beyond earth art riffs on another show at Cornell, Earth Art, which was “organized in 1969 by the Johnson’s predecessor, the Andrew White Dickson Museum of Art.” The meaning of Earth Art was different. It featured nine conceptual artists, and the idea was to take art out of the indoor, formal museum or gallery venue and into the outdoors, with unexpected locations around the Cornell campus and Ithaca.

The theme of beyond earth art is environmental—specifically how human beings are wrecking the planet’s biosphere.

And I suppose there is a tendency to think, “Oh right, what can a bunch of artists accomplish whining about the environment.”

Point well taken, but the late Kurt Vonnegut used to liken artists to the canaries that miners used to take into the coalmines. If there was a gas leak, the birds would stop singing and die, and the miners knew they had to get out of there. Vonnegut wrote that artists perform a similar function in a society. Being, arguably, more sensitive, artists are often the first to notice something that is going wrong, and it appears in their work.

And there are a lot of canaries here. This is a big show. It encompasses the work of more than three-dozen artists and fills two lobbies, three floors and the grounds. A person could spend not hours, but days viewing this show, coming back for multiple visits.

So…let’s take an opening look. I’ll tell you about the works I found most compelling.

Brandon Ballengee – Collapse, 2012: This is the most painful exhibit. A bit like being in an oceanic graveyard. On a giant white slab, sits a pyramid of glass jars containing dead sea life killed in the 2010 BP oil spill in the Gulf of Mexico. There are, in fact, 26,162 preserved specimens here representing 370 species. It is a haunted exhibit.

This is an almost unbearably heartbreaking work. Looking at it, one wants to weep. And I am struck by how the sea creatures look like pickled aliens.

As someone who has snorkeled in French Polynesia in the South Pacific and the Hawaiian archipelago in the North Pacific, I deeply love visiting the oceanic world. It is like visiting another planet. And—this is hard to put into words—when these creatures are alive, it all seems beautiful and somehow right. Seeing these marvelous creatures dead and pickled makes them seem more alien.

Mark Dion – Trichecus manatus latirostris, 2013: I found this piece the most compelling in the show. It is a life-sized plastic skeleton of a manatee, floating over a tar-covered bed of human detritus in a big steel-and-glass case. I had a religious epiphany looking at the manatee skeleton. (No need to get into specifics.)

There is something both alien and musical about it. It seems impossibly alien … but this is a close mammalian relative. And it seems like … sculptural music. I hear music in my head looking at it … (a blast of horns specifically).

David LaChapelle – Gas Shell, 2013: This one really got my attention. It looks like a neon gas station in a jungle. It struck me like a scene from a Fellini movie in its weirdness. (And, I assumed it was created in Photoshop. Until one of the museum staff explained to me that, actually, the artist constructed cunning little miniatures and photographed them in a real jungle on Maui.)

Alexis Rockman – Gowanus, 2013: This is an enormous painting. Of a disturbing science fictiony industrial site pouring poisons into a waterway, and the miserable animals that live there. Rockman has the technique of an old master, though his treatment is sci-fi fantasy in nature. (Below the waterline is a weird, deceased, composite creature … part turtle, fish, turkey, seal, bear, fox and so on.) There is a foggy, neon Bladerunner cityscape in the distance, while in the foreground, a squirrel humps a rat.

From the wall sign: “Once a rich wetland with a thriving ecosystem, Brooklyn’s Gowanus Canal has become one of the nations most polluted waterways. Rockman’s painting of the same title was inspired by the dolphin that swam into the canal in January 2013 and died shortly thereafter. Wondering what else might have died there, the artist created a composite creature—a tradition used in Indian miniature painting—out of the animals that used to live near or in the canal, including a black bear, a manatee, an American turkey, a red fox, and a harbor seal … “In a recent interview Rockman noted that as an artist he ‘can say things that scientists can’t really get away with in public.’”

Adam Cvijanovic – The Discovery of America, 2012: This is a monumental painting taking up most of two walls of the museum. The idea is it depicts an enormous mural canvas in an artist’s studio. (Down below are ladders, tables, power tools, arc lights, drop-cloths, a pizza box and beer bottles and so on.)

On one wall is a spectacular diorama of the North American continent in the Age of Mammals with saber-tooth tigers and mastodons and bison herds roaming under pristine, ice-capped mountains wreathed by a rainbow. On the other wall we see a tremendous long shot of hundreds of humans on horseback charging forward (“based on a photograph of the Oklahoma land rush of 1889”). And the two images crash into one another in the corner…the artist painting a wreck of smashed wood and canvas.

Rose-Lynn Fisher – Bee (Series), 2010: This is an astonishing collection of seventeen electron microscope photos of our friends, the bees. The exhibit commentary tells us: “Our own substance depends on bee pollination for one third of what we eat.”) These are weird and wonderful images. Electron microscope photography allows us to see the universe in an entirely new way. The universe at the micro-level is vaster and infinitely stranger than we could have possibly imagined.

Blane de St. Croix – Floating Fire, 2012: This is a “miniaturized dioramic landscape” showing the aftermath of a forest fire. It is a large sculptural installation hanging from five near-invisible wires, making it appear to float through the gallery like a flying saucer.

Chris Jordan – Cigarette Butts, 2013: This is a big wall-sized photo of 139,000 cigarette butts arranged to form the image of a forest. From the accompanying copy: “Chris Jordan’s photography, part of an ongoing series Running the Numbers: an American Self-Portrait depicts 139,000 cigarette butts—an amount equal to the number of cigarettes that are smoked and discarded every fifteen seconds in the United States.

“Cigarette butts are the number one littered item found on America’s beaches and waterways, and this form of litter has a far-reaching impact on the environment. Littered butts leach toxic chemicals and carcinogens, contaminate water sources, are poisonous to wildlife and are made of cellulose acetate, a type of plastic that does not readily biodegrade.”

We’re running out of room here, and we’ve barely scratched the surface of this big, sprawling, brilliant, multifaceted exhibition (which was curated by Andrea Inselmann, curator of modern and contemporary art and photography at the Johnson).

I haven’t even mentioned the exhibit Food-Water-Life/Lucy+Jorge Orta. This is a corollary exhibition presented as part of the beyond earth art project.

Lucy+Jorge Orta are artists/activists whose wonderful loopy sculptures and installations take up an entire floor. Although humorous, they deal with very serious issues of equitable food and water distribution and human rights.

And some of the sculptures are working Rube Goldberg contraptions that can do things like purify water or prepare food.

And there is a film and installations from their 2007 expedition to Antarctica to construct an installation as part of a campaign to amend the United Nations 1948 Universal Declaration of Human Rights to include a clause reading: “Everyone has the right to move freely and cross frontiers to their chosen territory. No individual should have an inferior status to that of capital, trade, telecommunications or pollution that traverse all borders.”

Well. This is all pretty serious stuff, no? Is there hope? Or are we doomed? Don’t ask me.

My two favorite writers are Ray Bradbury and Kurt Vonnegut. I feel like they’re my two fathers. Bradbury was convinced we humans would solve all our problems and move off into the stars. Vonnegut felt that we are doomed, that we’ve already wrecked Earth as a life support system, and it’s too late to fix it. I vacillate between the two poles.

I could only make a few parting suggestions. I think the human family could survive and flourish if we took a few simple, common sense steps: Get human overpopulation under control, stop destroying the oceans (the source of life on Earth), get serious about recycling (everything), and stop releasing insane amounts of carbon into the atmosphere. For starters.

And in the meantime, before the eco-apocalypse, you might drop by the Johnson and take in the excellent beyond earth art exhibit. •

beyond earth art: contemporary artists and the environment will be at the Herbert F. Johnson Museum of Art, Cornell University, 114 Central Avenue, Ithaca, until June 8. Museum hours: Tuesdays to Sundays, 10 a..m. – 5 p.m. The museum’s website is museum@cornell.edu.