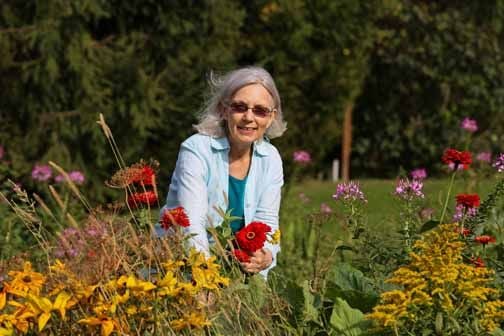 Elaine Mansfield, pictured in her home garden, is the author of Leaning Into Love, a story about handling the loss of her husband, Vic, who passed away in 2008. 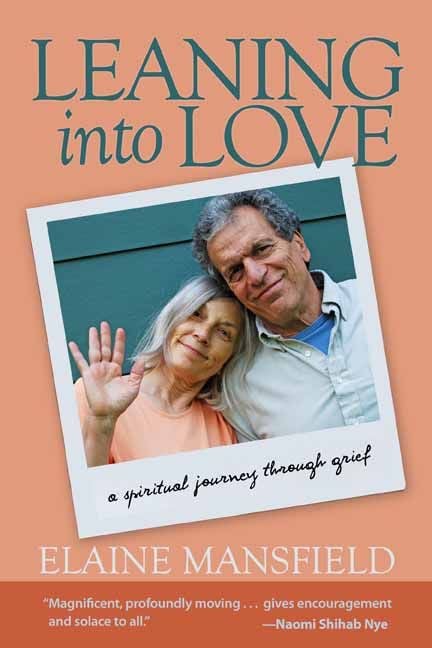 Elaine Mansfield, pictured in her home garden, is the author of Leaning Into Love, a story about handling the loss of her husband, Vic, who passed away in 2008.

Elaine Mansfield can still become a little weepy recalling her beloved husband Vic’s illness and death, the core of her just-published book, Leaning Into Love, A Spiritual Journey Through Grief, (Larson Publications, $14.95). Not to worry.

“Tears signal to people who don’t know me that I’m falling apart and need to be saved,” she wrote. “In fact, I am a strong woman with open feelings and wet eyes.” In her book she also writes of finding her strength and creating a new life as a widow, letting a window of light into a potentially dark subject. “You allow grief in and get to keep the love,” she said.

When Vic Mansfield came down with flu in early 2006, he was a healthy, active physics professor, and they both expected the ailment to pass with a few days of rest and care. But symptoms lingered into spring and summer, “in a way that made us nervous,” Mansfield remembered. He was diagnosed with a rare lymphoma later that year.

In her book, she speaks unflinchingly of the harrowing uncertainties of a serious illness, the “Is this it?” moments when a life hangs in the balance and the breath catches while waiting to see which way the scales will tip. There’s rejoicing when treatments seem to work, and life resumes with an added layer of tenderness and gratitude.

“Love and grief are a package deal, which we don’t think of when we’re falling in love,” she said. So there was both release and sadness when death arrives as an inevitable conclusion to the suffering of long illness. “When Vic finally died, there was no other way out. It was not a horrible thing,” she said.

There is also joy in the family’s connection with their land, a bond, which Elaine frequently refers to as sacred. The 70-acre farm has a conservation easement, and the family continues to maintain it with love and care. Vic’s ashes are buried in a cairn built by his sons at a favorite oak tree. It’s a place Elaine visits frequently, bringing flowers, prayers, and poems.

She writes and talks often about the importance of personal ritual. “A Tibetan monk gave us a simple healing meditation based on getting help from the healing forces of nature,” she said. “We did that many times a day for nearly two years. We did it during chemotherapy, to help Vic accept it as healing. We didn’t count on it to heal him physically, but it helped us heal the heart, to surrender and accept it.”

Before becoming ill, Vic Mansfield, a professor of astrophysics at Colgate University, was already the author of two acclaimed books whose themes touch on the intersection of Western science and Eastern spirituality; he was in the midst of a third book, written at the request of His Holiness the Dalai Lama, and managed to finish it and present it to the Dalai Lama during brief respites from his illness; though just a few weeks later, Vic entered the hospital for the last time.

Just as the Dalai Lama often states, “My true religion is kindness,” Vic made a practice of kindness through his illness. “He was amazingly kind in every medical situation, kept putting out positive energy,” Elaine recalled, still clearly awed and inspired by her husband’s attitude.

“Life is going to be loss,” Elaine said, “but there’s so much beauty, too. Things happen that you can’t control. But no matter what—you can still find a way to be kind.” So the big garden she’d planted to nourish herself and Vic became the source of gifts to others and a way she could comfort herself.

She writes about the nurse who came with warm blankets and a smile, the sight of someone reaching down to speak with a wheelchair-seated patient, a ray of light coming through a window, the steadfastness of friends who stayed with her, let her cry, listened to her when she needed to talk and sat quietly with her when she needed silence as teachable moments. People need to tell their stories and be heard, she learned. To help another person through the grieving process, “The number one thing is to show up,” she said. “And don’t say, ‘Call me if you need something. The person who’s grieving isn’t going to. Be specific—do you want soup? Want to come to dinner next Thursday?’ and allow people to tell their stories and be interested in their experience. That’s the greatest gift of all.”

In the six years since her husband’s death, Elaine’s bumpy navigation through loss and healing has led her to volunteer at Hospicare, to lead bereavement groups, to affirm others’ journeys down a similar path, to broaden her love of the land into working with ecological groups in their efforts to ban hydrofracking in the Finger Lakes. Despite increasing deafness, an invisible disability she combats with hearing aids and lip-reading, she gives workshops in creating personal ritual, and is giving a Tedx talk in Corning in November on that topic. She continues to write every day, and she’s looking for the thread of her next book, excited by the intellectual chase and the adventure that will unfold as she finds it. •

Mansfield will be reading from Leaning into Love and signing books at 3 p.m. on Sunday, Oct. 12 at Buffalo Street Books in Ithaca. A portion of the proceeds from book sales will go to Hospicare, where Elaine Mansfield continues to volunteer, including leading bereavement groups.