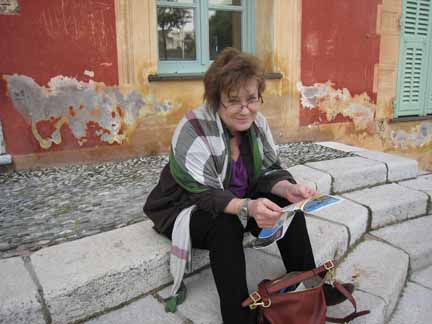 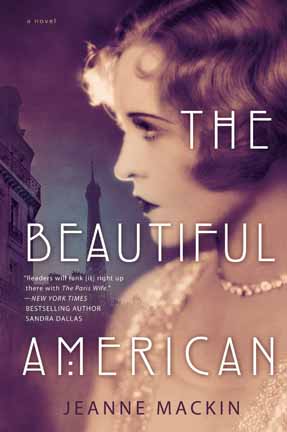 The Beautiful American, the fifth historical novel by Ithaca writer Jeanne Mackin, is set in the Surrealist art scene in early 1930s Paris and extends through World War II in Vichy France and the post-war chaos. The story centers on the erratic friendship between the celebrated muse, model, photographer, and war correspondent Lee Miller and Nora, an ordinary young woman living the expat life with her boyfriend, a would-be artist. Mackin will be reading from her novel, published this week by New American Library, at Buffalo Street Books on Sunday, June 8, at 2 p.m. The Ithaca Times spoke recently with Mackin about her work.

Ithaca Times: What draws you to write historical novels?

Jeanne Mackin: I read them like mad when I was a kid because I loved the travel sense of them—being in a different time and place, inhabiting other people’s lives. I love both reading and writing historical fiction; it’s always been a form of travel. And for me travel itself is a grand passion.

As a writer, I have a blind spot with contemporary narrative in that I don’t see stories going on around me. I need the distance of history to get a sense of narrative. History to me is just a series of stories about people, and when one of them really catches my imagination, I have to pursue it to its conclusion—which for me is the end of the novel.

IT: How do you research your books?

JM: Mostly through print: I read a lot of memoir, letters, journals. And then there’s visual research, which can mean actually traveling to the place, as I did for The Frenchwoman and The Beautiful American. I look at the art of the time—in this instance, many famous photographers had documented this period, including Lee Miller herself. Their photographs show what people looked like, what they wore, the objects around them.

I also went to Grasse, a city I’d always wanted to return to. To be able to describe something in fiction, you have to really know what it looks like; for me that means being there and really looking around. What do the little towns look like? How wide are the streets? What color are the trees? Green has a hundred different shades… You have to observe to be able to translate it into words so that other people can see it as well.

IT: The perfume industry in Grasse, where Nora finds work, provides both backdrop and thematic motif here.

JM: In part it has to do with my father; he lost his sense of smell and suffered from this. I’ve always valued being able to smell—and I really love a good perfume. In the novel, I wanted Nora’s specific talent to be in contrast to Lee’s, not visual but through the nose.

IT: It wasn’t necessary to go to England for the Lee Miller archives?

JM: No. As a writer of fiction, you have to keep in mind that you’re not a scholar, you’re not writing nonfiction. My compulsion is to keep doing research forever and ever. At some point I have to step back and say I’ve got enough, it’s time to tell the story. For a nonfiction work on Lee Miller, you could easily spend 15 years.

IT: What’s the relation of invention to actual historical material?

JM: The events in Lee Miller’s life are factual: her childhood in Poughkeepsie, her relationship with photographer Man Ray, her celebrity in Paris, then her later marriage to artist and curator Roland Penrose, and her child. My largest invention here is Nora, the main character, and the fictional relationship between the two, as children and later as adults. In my novels, I usually have a well-known person—Marie Antoinette, Eleanor of Aquitaine, Napoleon—and then create a world around them, using some real and some fictional characters.

IT: You seem to have a penchant for female protagonists.

JM: Yes, I don’t know why. Partially because of the genre, which is largely read by female readers. I’m more comfortable with that voice. I’ve tried writing from the male point of view but I don’t think I was successful with it.

IT: Nearly all your historical novels are set in France—what’s the pull there?

JM: It’s partially ancestry; my mother’s family is French Huguenot. I love France: I’ve studied the language, I can cook the food a little bit, I love scarves …

IT: How did the idea for this novel emerge?

JM: I wanted to do something in the 20th century, finally, and I’ve always wanted to write about World War II—about how the war affected families, not just the soldiers and battlefield. My father was in the army, in the South Pacific.

IT: You cover decades—have your other novels had such long time frames?

JM: The Frenchwoman covers 30 to 40 years. If you love historical fiction, one of the things you love is “the sweep.” It’s not a snapshot—it’s almost a waterfall of time and you carry it to a certain conclusion. Here, near the end, there’s a reason that Nora’s friend Omar is Algerian—Algeria is France’s next war. So the story goes from war to war to war.

IT: What were you trying here that you hadn’t done before?

JM: This novel begins after I was already born. Writing about events that are still fresh in the memories of living people terrified me; it’s so easy to be proved wrong—“No, it didn’t happen like that.” I’ve never worked with something so close to my own lifetime; it felt very strange and very different.

IT: Why Lee Miller as an inspiration?

JM: Lee was the life I wanted to explore. I’ve known her work since high school. She was brave—a fascinating woman. She broke the rules and broke new ground for artists, especially women. She reminds me of Mae West’s saying “Good girls go to heaven but bad girls go everywhere.”

IT: You’re married to a painter [Steve Poleskie] who’s also a photographer. How did that affect your writing?

JM: I was terrified. Steve has such a rounded, well-developed sense of aesthetics; I was afraid of making a fool of myself. Photography is a talent I don’t have. A friend once tried to teach me the basics, but I couldn’t even focus a camera, much less properly develop film. I’m not visual; I’m a completely verbal person—I sometimes dream in dialogue with no images. But the art became something I wanted to think about, and photography is really the art of the 20th century, isn’t it? In all honesty, I’m pretty happy about what I was able to read into Man Ray’s photographs in relation to his feelings for Lee: how Surrealism dissected the female body and objectified it so completely. The violence in some of the Surrealists’ images really does predict the war to come—a sense of the artists seeing something in the future that others may not yet perceive.

IT: What other themes and ideas are you working with here?

JM: The wartime experience for people back home was about loss—mothers losing sons, wives husbands—the war tore people apart. So I wanted to look at reassembling life after awful destruction and loss, the possibility of putting things back together. And the rebuilding of society and culture was for me thematically echoed in rebuilding of the friendship between Lee and Nora and the discovery of Nora’s daughter.

IT: There’s a real darkness in this novel …

JM: Yes, I’m writing about Vichy France and lost daughters and rape. France felt totally emasculated by the German occupation. What do men do when they feel this way? Some beat up women. And when cultures go to war, one of the first things they do is some rape the women. It’s happening now, in Nigeria, sexual slavery. I’m also indirectly writing about my father, what the war did to him. He had a lot of rage; the conflict was personal. He and his friends drank a lot, adding unhappiness to family life. My mother always said the war changed him, but of course I never knew him before the war.

IT: What was the most challenging aspect of writing this story?

JM: The hardest part was Nora’s search for her daughter at the end. I had to figure out what was logically possible—could she have made it to England at that point? And also emotionally: how to make it as dire as I wanted it to be without becoming a soap opera. There’s a fine line between conveying intense emotion and just stepping back and telling the story. It’s just like real life—you have to learn when not to wallow.